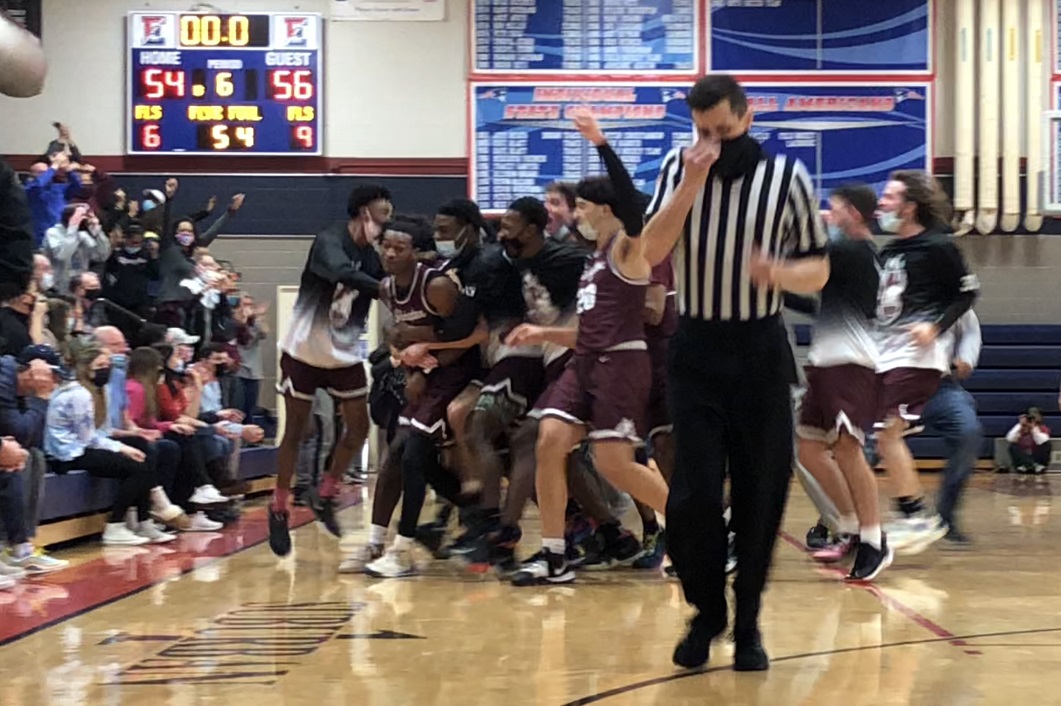 The Abington boys basketball team mobs Rob Bell after his winning shot in double overtime against Central Bucks East in the District 1-6A semifinals on Tuesday, March 16, 2021. (Andrew Robinson/MediaNews Group)

BUCKINGHAM >> Rob Bell had the ball in his hands, which is exactly where Charles Grasty wanted it.

As the clock wound toward the final 10 seconds of the second overtime period against Central Bucks East on Tuesday, Grasty declined to take a timeout and instead gave Bell, his senior point guard, the play. It was a play Abington had run hundreds of times this season and the veteran coach saw no reason to not let his players see what they could do with it.

Bell’s drive led to a layup that hung on the rim just long enough to make it extra-dramatic before falling in the final second as the No. 14 Ghosts slipped by the No. 7 Patriots 56-54 in a District 1-6A double-overtime semifinal thriller.

“I had a nice mis-match on their big man and I felt I had an isolation play where I could take him to the rack and get a layup,” Bell said. “It worked out in my favor. Coach always has trust in me and at that point, he wanted the ball in my hands and I felt I would get a nice play and hopefully, a great bucket.”

Tuesday’s win continued an improbable postseason run for Abington that didn’t seem all that likely a few weeks ago when the Ghosts were 5-4 and reeling after a loss to Quakertown. They just kept coming to the gym and working, confident their time was yet to come and their best was in front of them.

It was. Abington has won eight of nine games since that subpar start including three straight road wins over higher seeds in the district tournament. All of it has added up to another trip to the District 1 title game, the Ghosts’ fifth in the last seven years.

“The last half of the season, our guys found their confidence,” Grasty, who has guided Abington to four district titles, said. “They started trusting what we were telling them and this was the outcome. We kept going into the gym, kept grinding and kept working our tails off. They kept believing and if you believe, that’s half the battle.”

Abington (13-5) has been winning with its defense, but early on Tuesday it seemed like that might not be enough. The Ghosts missed their first five shots and for most of the first half, simply could not finish a shot around the rim while the Patriots showed their long-range proficiency.

Oreck Frazier banks in a three to tie it 54-54
Timeout East pic.twitter.com/vY6Lc5hpV6

Led by their stellar senior guard Joe Jackman, East built a 10-5 lead at the end of the first quarter and answered every Abington run in the first half with a big score of some kind. The Ghosts fought back to tie the game 25-25 on a bucket by Oreck Frazier in the final minute of the half, only for East to run a play to perfection that ended with Jackman finding classmate Brendan Harte for a three at the horn and a 28-25 advantage.

With just one team advancing out of the district to the PIAA bracket, it was a difficult ending to a terrific season for the Patriots (14-4) that saw them capture the SOL Colonial title.

“You don’t focus on the game, you focus on the six seniors we have, the impact they’ve had on our program and the bar they’ve raised,” Patriots coach Erik Henrysen said. “I can’t say enough about them.

“We felt like we put ourselves in a great spot, we battled through and we had our opportunity at the end. I’m proud of the guys.”

Abington never led in the first half and the visitors didn’t lead in the third either but a score by Bell, who led his team with 19 points, made it a 36-36 deadlock going to the fourth. The Ghosts took their first lead on a drive by Bell only to give it right back on four straight points by East.

Antoine Ellis, who along with Connor Fields played tremendous defense for Abington, stuck his team up 45-42 on a three midway through the quarter. The lead held until Jackman drilled a three with 56.5 left to tie the game 49-49, then he and Bell traded scores in the final 25 seconds.

Jackman scored 27 points in a superb effort to end his high school career.

East, which had fouls to give, smartly used them to take time off the clock, then held firm and forced Bell into a tough shot that was off the mark at the regulation horn.

“I told my team just lock down on defense, don’t worry about anything else and let the game come to us,” Bell said. “We were anxious in the beginning of the game so I told them be patient, play ball like we know how to play and everything will work out.”

The Ghosts found themselves in trouble in the first overtime, trailing 54-51 with 6.8 seconds on the clock. Frazier, who scored 17, had secured a huge offensive rebound that prompted Grasty to take a timeout where the senior decided to speak up.

Fraizer had half the Ivy League chasing him this fall as a football prospect before ultimately choosing Harvard for a reason and Grasty liked what Frazier was pointing out.

“As smart as he is, he said if we run one of our other plays, I can pop and catch it, maybe they’ll switch and I’ll get a good look,” Grasty said. “He called that play. Hey, our guys are smart enough and I don’t have this game mastered so if you see something, let’s go with it.”

Frazier saved his team with a banked-in 3-pointer from the top of the arc with 2.8 on the clock in overtime, then broke up East’s long inbound pass to put four additional minutes on the clock. The future Harvard defensive back wasn’t ready to call it a hoops career and was confident making that suggestion in the timeout huddle.

“For one, I’m shooting over 50 percent from three, so that’s a bonus but I thought back to this one time in practice where we ran this play and it worked,” Frazier said. “Coach was drawing up a play but when I made him recall that moment, he changed his mind and said ‘run Oreck’s play.’

“I had to hit a little crossover because it wasn’t open, but I was able to make a move, got the shot off and it went in.”

Frazier credited Grasty as the reason the Ghosts didn’t splinter after a COVID-19 shutdown in preseason and their ragged start to the season.

“He trusts us,” Frazier said. “He helped get back from our shutdown with COVID, helped us win all these games and got us to the playoffs. We bonded, we’ve become more of a family. Coach is like the father of all that.”

It felt the second overtime would come down to one play. East, which had won its previous two games on last-second scores by freshman Jacob Cummiskey near made it three-for-three this postseason. The talented young guard was able to get a drive to the rim but Ellis and Frazier forced up a tough shot that wouldn’t go, giving Bell an opportunity to win it.

“We like to see Rob going downhill because once he is, he is very hard to stop,” Grasty said. “We wanted to hold for the last one, but we also didn’t want to call timeout and let them set up a defense so we called our bread-and-butter right there.”

“They’ve been hearing about the past, had people tell them they won’t be any good without Eric Dixon or Lucas Monroe and these guys heard it,” Grasty said. “They wanted a chance to build their own legacy and I think they’re doing a heck of a job.”

This Ghosts team may not have a record-setting player like the four previous teams to reach the final but in a year that’s been defined by a team’s heart and ability to persevere, this group has everything it needs.

“We’re really proud,” Bell said. “In the beginning, I don’t know if we really thought anything like this could happen but we kept trust in our teammates and our coaches. But the job’s not finished, we have work to do on Friday.”