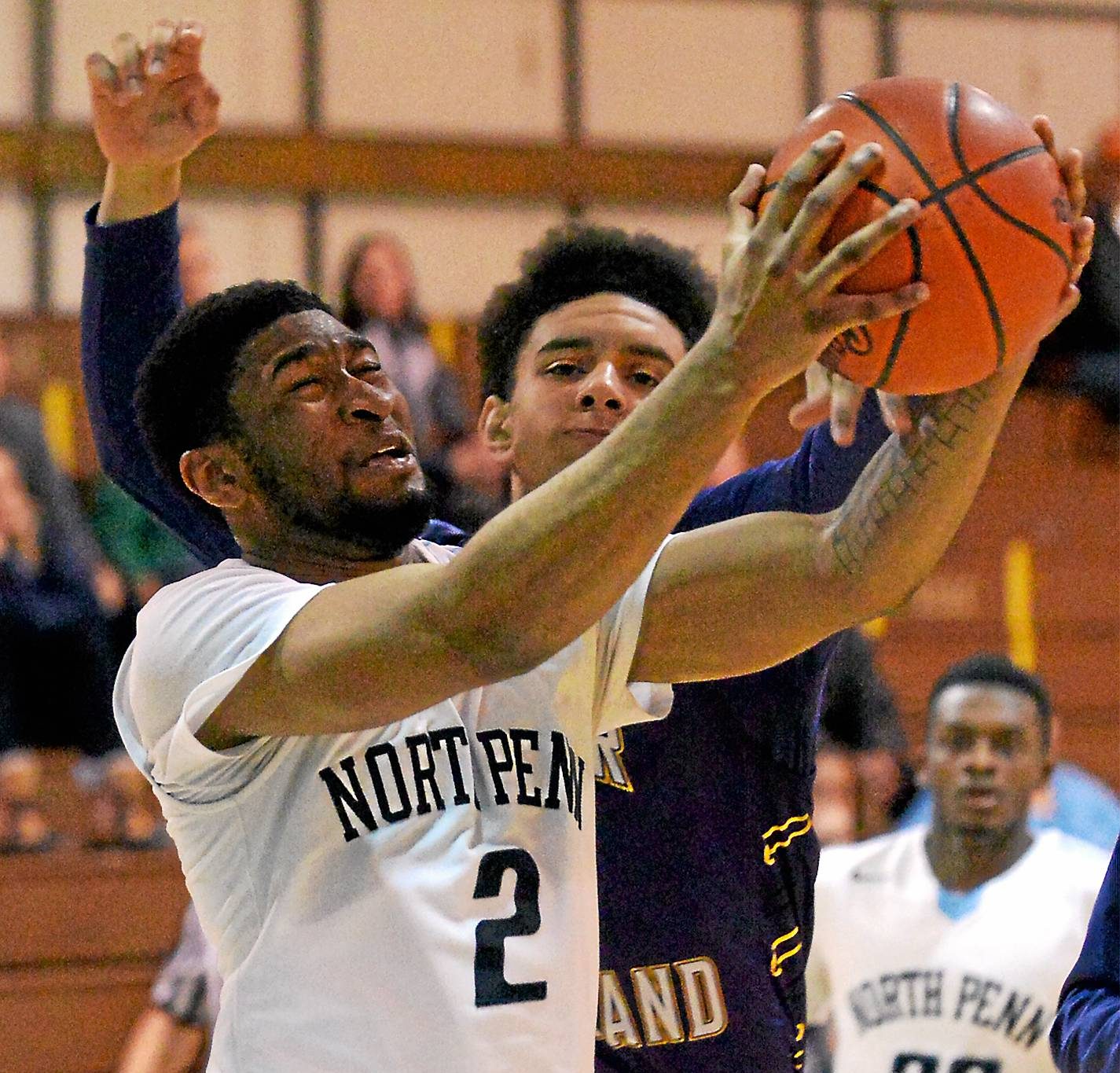 The North Penn boys basketball team is the last unbeaten team in Suburban One League Continental Conference play with two games this week before the mid-way point.

The Knights host Pennridge in a big contest Tuesday night then travel to Central Bucks East on Friday. North Penn has been a versatile group this season and has shown a lot of depth. Early in the season, it is guys stepping up while Reece Udinski and Ricky Johns worked their way back after football season and now, Lance Ford has been stepping up with point guard AJ Mitchell having some bad luck.

With a bevy of similar-sized players who are all good athletes, North Penn is a tough team to score on and it grinds hard on offense, scoring plenty of second chance hoops and keeping possessions alive.

Pennridge presents a tough, hard-nosed team that will want to match North Penn’s physical play and one of the conference’s top scorers in sophomore Sean Yoder.

Sunday brings the annual Play-By-Play Classic girls showcase on the campus of Phiadelphia University, with 10 area teams on the docket.

Play tips off at 8:30 a.m. with Abington Friends against Merion Mercy. Gwynedd Mercy Academy faces Garnet Valley at 10 am, followed by Mount Lebanon against St. Basil at 11:30.

At the same time on the adjacent court, Mount St. Joseph takes on Archbishop Carroll, kicking off a string of local squads on “Court 2.” Germantown Academy follows against Perk Valley at 1 p.m. then Archbishop Wood takes on Delaware power Ursuline Academy at 2:30.

As she left Cheltenham’s gym on Friday night, Plymouth Whitemarsh guard Taylor O’Brien managed to rep the three sports she competes in for the Colonials.

Wearing PW basketball sweats and holding one backpack, she had a second backpack, one embroidered with “PW Volleyball” over her shoulders. Pinned to that second bag was her track bib from the Penn Relays last year.

Three-sport athletes are a shrinking species, but O’Brien not only competes in three separate sports, she thrives in each of them.

Right now, the junior is on a tear for the 10-0 Colonials girls basketball team, scoring at least 30 points in three of her last four games, including a career-high 33 in Saturday’s win over Palumbo. A three-year varsity player and two starter at point guard, O’Brien has shown a more matured style this year, blending her athletic ability with game awareness.

“It feels a little slower, but it’s been a good pace for our team,” O’Brien said after PW’s win over Upper Dublin back on Dec. 23. “I want to make sure we’re in the right spots to score and be able to use our abilities to the best that we can so we can be in the situations where we can succeed.”

Even last year, teams paid O’Brien extra attention on defense but it’s gone up to a different level the last few weeks. Against Cheltenham, the junior had just 14 points with many of them coming in transition off turnovers, while being face-guarded in halfcourt sets.

A few nights earlier at Hatboro-Horsham, O’Brien was the “and one” in a box-and one defense from the Hatters, though she still went off. She knows she doesn’t have to do it all though and let guards Ali Diamond and Lauren Fortescue run the show on Friday as they combined for 30 points.

Colonials coach Dan Dougherty said that the main thing O’Brien worked on was improving her dribbling with her right hand so defenders couldn’t force her that way and expect success. While she wants to attack the basket as much as possible, the point guard has also gotten better at reading a defense and, in the game against Upper Dublin, made a cross-court pass to Diamond for a corner 3 that gave PW a big boost of momentum in the second quarter.

“I realize that most teams know how to stop me, it just means I can get my teammates more open,” O’Brien said. “I want them more involved in the plays so it’s not just centered around one person. Everyone should be involved and everyone is capable of getting their numbers up when it comes to scoring.”

PW is on top of the SOL American for now, though there’s a trip to Upper Dublin coming up soon and every other conference foe wants to be the first to hand the Colonials that first loss. O’Brien has some experienced being on a team with a target on its back, as does forward Lauren Coscia, as both were on PW’s volleyball team that ran through an undefeated regular season this fall.

Much like this season has been a breakout on the hardwood, O’Brien could be in for a big spring season after a solid sophomore track and field campaign. She placed fifth in the state for the Class AAA high jump, also taking second in the event at districts and won a District I title in the 300m hurdles, also setting PR’s in the 400 and 800.

PW made districts last season, but the Colonials want to take a step beyond that, hoping for a first-round home game and maybe even a push for a state playoff spot. It’s a team game, and PW plays well as a team, but if O’Brien keeps this up, a playoff run could be a reality next month.

“She’s an awesome player and we look for each other with our passes,” Fortescue said. “It’s been so much fun to work with her, she’s so talented. I’m looking forward to the rest of the season together.”

Shooting slumps happen to every player on every team at some point in a season. It just happens that all the guys on Upper Moreland’s boys basketball team fell into one last week.

The Golden Bears blew a lead at Wissahickon on Friday, then just couldn’t get anything to fall through in a loss to North Penn on Saturday when they shot just 3-of-20 from 3-point range. Yet, coach Matt Heiland isn’t too discouraged and has taken a lot of positives from his 6-5 team so far.

“The one great thing about our league that I really like is you get different chess-match games,” Heiland said on Saturday. “You get PW and Hatboro who are going to pressure you and run you up and down, you have a game like (Friday) where Wissahickon throws the kitchen sink at you and Quakertown did this to us on Tuesday. It only benefits us.” Upper Moreland is in Class 5A this year after making districts last season in 3A under the old classifications. Playing in the SOL American, they get plenty of games with bigger schools like PW and Hatboro-Horsham, which in theory helps them long-term.

Heiland cautioned his guys are still a long way off from thinking about the postseason, but added if that happens, games like Saturday against North Penn do help.

The Bears aren’t going to win shootouts, so they have to play good defense, slow the game down and run their offense well. They did that against the Knights, they just didn’t make shots. While North Penn won 44-32, it was a 36-32 game with about four minutes left and the Knights closed it out with good foul shooting.

“We have goals based off of quarters during the season,” Heiland said. “Our goal for the first quarter was 4-2, we were 3-3. The second quarter was 3-2 and after (Saturday), we went 3-2, so we were playing with house money and had no pressure on us. We’re 6-5 and if we handle our business, we’ll get to 12 wins and 12 wins will get us in.”

Upper Moreland has a veteran squad, with senior guard Casey Decker and senior wing Damian Washington both capable of draining 3-pointers. Junior Ryan Coyle is a three-year starter and senior forward Shane Stone is a hard-working, athletic presence inside.

Stone keyed the second-half comeback against North Penn, but like the rest of his teammates, didn’t shoot the ball well. Heiland said Stone is prone to some moments of rushing things on offense and the coaches are working with him to take that extra half-second that could make him into a true force.

Upper Moreland has Upper Dublin and Plymouth Whitemarsh this week to close out the first half of conference play and the Bears certainly hope their shooting numbers pick up, unlike the frigid air outside.

“We have to keep the big picture in focus, but work daily to get to that point,” Heiland said. “The last two games, I felt really good about how we played but you’re not going to win two games when you’re 8-for-38 from 3-point range. We put this behind us and we move forward.”

NO WALL, NO PROBLEM

Some could have seen part of the gym wall at Archbishop Wood collapsing a day after the Vikings lost their PCL opener to Father Judge as a symbolic bad omen.

Could have, except that the Vikings came back to win their next two games to close out the first week of Catholic League play with a 2-1 record. Friday, they went on the road and handed Archbishop Ryan its first loss of the season in a romp, then gutted out a 76-68 win over Archbishop Carroll on Sunday at Holy Family.

“It was a learning lesson from Tuesday night,” senior point guard Collin Gillespie said on Sunday. “This was a big game for states because (Carroll) is in 5A with us. We had to come in and play with the same intensity we did Friday night and we want to continue to move in the right direction and move forward.”

Gillespie has been terrific this season but he’s also making sure to keep his teammates involved and their confidence high. Junior big Seth Pinkney impacted the Carroll game with nine blocks while guard Andrew Funk was hot in the first half.

It was also a big week for senior Matt Cerruti, who scored 17 in the Ryan win and 11, all in the second half, against Carroll.

This week brings just one game, but it’s another big one with PCL and 5A implications. Wood is on the road at Bonner-Prendergast at 7pm Friday, with the Friars still undefeated this season.

“We were able to get their attention,” Wood coach John Mosco said. “The Catholic League is always about who you’re playing on that night, scouting, you know personnel and they know your personnel. They were more focused coming out against Ryan.”