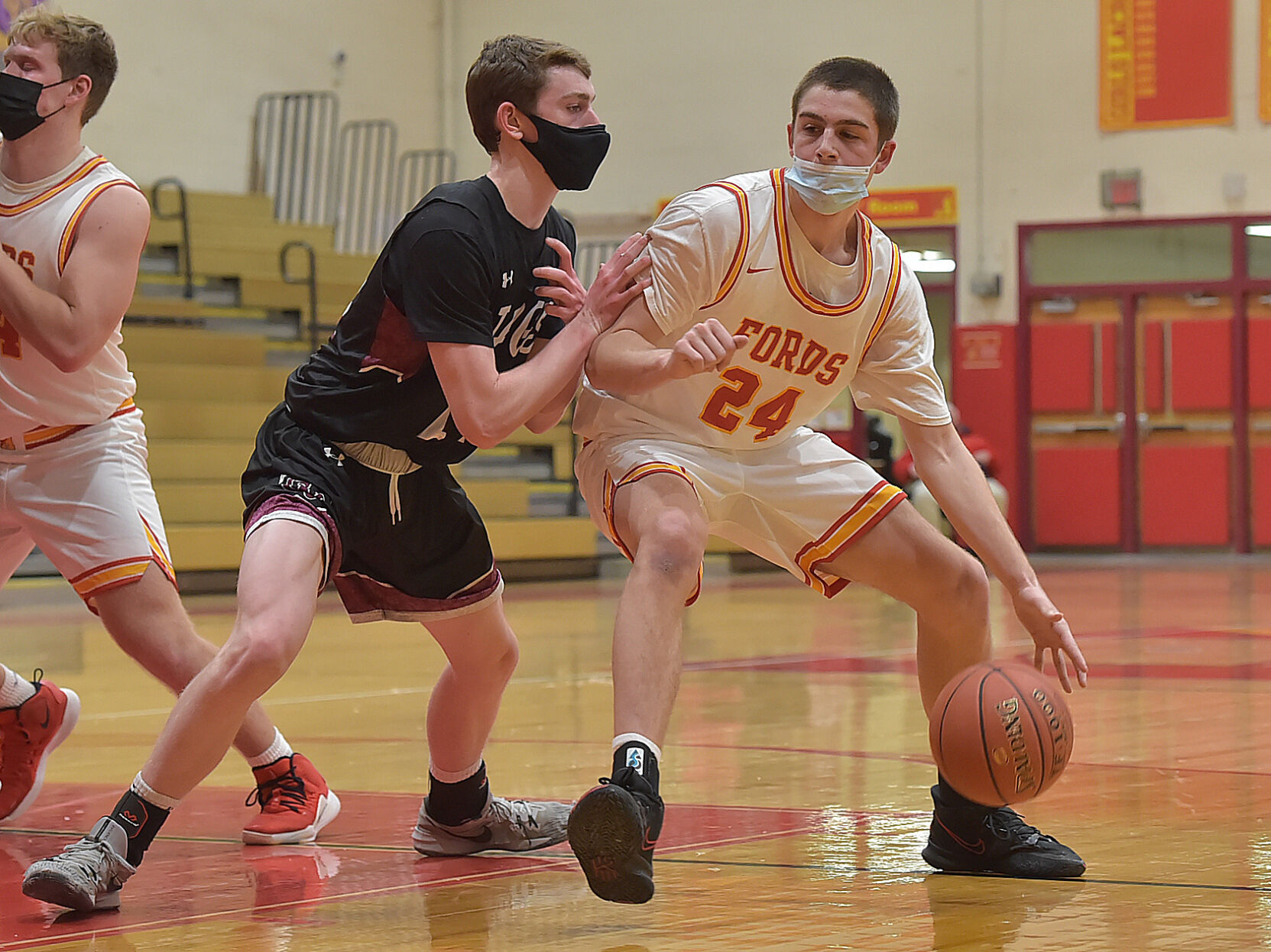 In addition to Player of the Year Karell Watkins of Chester, the rest of the 2021 All-Delco team includes:

Chester’s Fareed Burton, right, goes to the net during the District 1 Class 5A championship game against West Chester Rustin, won by the Clippers. (Pete Bannan/MediaNews Group)

Fareed Burton, Chester: The senior point guard was the floor general for the Clippers on the way to another Del Val League title, the District 1 Class 5A crown and the state semifinals. Burton averaged 16.3 points per game, second on the team only to Watkins, who was the beneficiary of many a pinpoint Burton feed. He also chipped in 4.6 rebounds, 3.6 assists and 3.4 steals per game. He led Chester with 27 made 3-pointers. Burton scored in double figures in 13 of 15 outings, topping out at 27 points in the state semifinal loss to Archbishop Ryan, the Clippers’ leading scorer on the night. Burton also scored 21 points in the states win over Crestwood and 22 in a one-point loss to Imhotep, the Clippers’ only setback of the regular season. Burton posted a triple-double of 17 points, 12 assists and 11 rebounds (plus five steals) in a win over Interboro on Feb. 9.

Carl Schaller, Garnet Valley: Helped create some history with the Jaguars in his senior season. Under the point guard’s guidance, the Jaguars won their first Central League title and reached the District 1 Class 6A semifinals. Schaller scored in double figures in all but one game, averaging 18.8 points per game. He also averaged 4.1 rebounds and 3.6 assists per contest. He hit a season-high 33 points in a win over Radnor Feb. 6. Schaller was the team’s leading scorer with 20 points in the 44-35 win over Marple Newtown in the Central League semis, in the league finals win at Conestoga with 18 points and in both of the Jaguars’ districts wins, including 26 points in a 63-38 domination of Perkiomen Valley. Schaller finishes his career with 1,186 points, tied with Nate Daltry for second-most among players to spend their entire career at Garnet Valley. Last year, Schaller became the first Garnet Valley All-Delco boys basketball player since 1997-98 (Joel Smith). He’s the first player in program history to be a two-time All-Delco. He will continue his career at Gettysburg College.

Jameel Brown, Haverford School: The wing only got a nine-game junior campaign, but he made the most of it, averaging 21.7 points per game, leading Haverford to a 7-2 record and a three-way share of the Inter-Ac title in the abbreviated season. Brown missed all but five games of his sophomore season with a wrist injury and didn’t play a game for 14 months, but he didn’t look like he’d missed a beat. He hit 24 3-pointers, a team-high. Standing a solid 6-5, the heady and athletic wing was often tasked with defending the opponent’s best player. His last game, a win over rival Episcopal Academy, dropped his scoring average but was representative of his contributions this season: 10 points, eight blocks, five assists, four steals. Brown topped out at 29 points in a double-overtime loss to Germantown Academy on Feb. 16. He had been committed to Purdue but recently reopened his recruitment.

John Seidman, Haverford High: The senior guard continued to do it all for the Fords, earning his second straight All-Delco nod. Seidman led the team at 14.6 points per game, the only Ford in double figures. He added six rebounds, four assists and two steals per game, serving as the team’s top defender, top scorer and top facilitator with the ball. He tied for the team lead with 15 made 3-pointers, leading Haverford to an 8-6 record and a berth in the District 1 Class 6A tournament. For highlights, Seidman scored 26 points against Garnet Valley, then 16 in an OT loss to the Jaguars, 19 points in beating Central League top seed Conestoga in the regular season, and 22 in a win at Strath Haven. In his final high school game, Seidman’s 22 points nearly willed the Fords to beat Upper Dublin in their districts opener. Seidman finished his career with 1,080 points, third in Haverford history. He’s the fifth Haverford member of the 1,000-point club and the first since 2001 (Chris Dougherty). Seidman is the first multiple-time Haverford All-Delco in boys basketball since Larry Davis (1976-77). He committed to Franklin & Marshall.

Anquan Hill, Archbishop Carroll: The 6-8 senior forward displayed obvious talent as a sophomore for the Patriots, but this season imposed his will on games more often. Hill scored in double figures in all but one game on the way to averaging 17.3 points, 9.4 rebounds and 2.1 assists per game. He is a modern stretch four who can play on the perimeter (11 made 3-pointers in 16 games) or in the paint (2.2 blocks per game). Hill helped the Patriots go 8-8, winning the District 12 Class 4A title and advancing to the state quarterfinals. Hill scored 25 points in beating Martin Luther King for the district title and 17 in the states loss to Allentown Central Catholic. He also scored 32 points in a regular-season win over Archbishop Ryan, the Class 5A state finalist, and 29 in a win over Conwell-Egan. Last week he committed to Fairleigh Dickinson.