After defeat in district final, West Chester East looking to bounce back in States 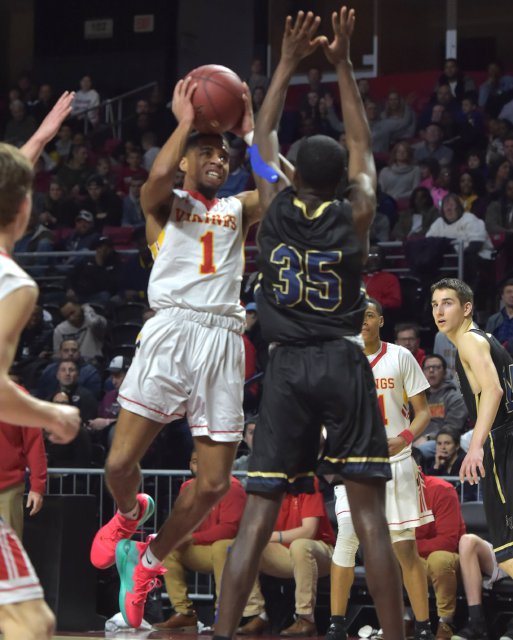 Philadelphia >> Following West Chester East’s disappointing 65-54 loss to Sun Valley in the PIAA District 1 5A boys’ basketball championship final at the Liacouras Center Saturday afternoon, Viking senior co-captains Ben Delaney and Gibby Trowery spoke of the never-say-die spirit that propelled their team into the district finals – and their first state tournament appearance in 17 years.
“We were counted out all year – we weren’t supposed to make the Final Four of the Ches-Mont Tournament, we weren’t supposed to be the No. 1 seed for Districts,” said Delaney. “We’re coming with the same mind-set for States; we’re aiming to win.”
Trowery, who scored 18 points Saturday, said, “Nobody thought we were supposed to be here. Last year, we were a 15th seed at Districts, this year, we were a No. 1 seed, and we proved so many people wrong this year. We’ve got to continue to keep our head for States.”
East head coach Tom Durant said, “I told the team after the game that we’ve still got States coming up, and that they will be defined by how they handle this defeat. The season’s not over; that’s the beauty of it.”
Earlier this season (Jan. 5), West Chester East defeated host Sun Valley in double overtime, battling back from a deficit in the final two minutes of regulation. Likewise, on Saturday the Vikings (21-6) had to battle back from several sizable deficits against No. 6 seed Sun Valley.
The first comeback came in the first quarter, after Sun Valley made its first six shots to take a 15-10 lead.
“Sun Valley made some daggers of shots today,” said Durant. “Credit goes to their team. It wasn’t just one guy, it was a lot of their guys who made key threes, or a key putback or a key rebound.”
West Chester East bounced back with an 8-0 run. Viking 6-foot-9 junior Andrew Carr worked his way inside for a three-point play; then junior Tym Richardson and senior Brenden Merten teamed up for a takeaway that was punctuated by a Richardson dunk that tied the score at 15-15. Following a Sun Valley missed shot, Delaney hit a trey from the top of the key and suddenly the Vikings were ahead 18-15.
The topsy-turvy second quarter featured six lead changes, and Sun Valley’s Marvin Freeman hit a trey at the buzzer to put the Vanguards ahead at the half 29-26.
Early in the third quarter, West Chester East fell behind 36-26, but battled back on a 10-0 run highlighted by treys from Merten and senior M.J. Kushner.
The fourth quarter began with Sun Valley leading 40-39; then a couple of threes by Freeman and teammate Dominic Valente were matched with a pair of treys from Trowery to keep the Vikings within a point at 46-45. Trowery scored 10 points in the fourth quarter, and finished with four treys. The Vikings and Vanguards combined for 15 treys Saturday.
Following a Sun Valley turnover, Trowery drove in for a basket to give the Vkings their final lead of the game, 47-46. West Chester East missed their next four shots – three from underneath – as Sun Valley forged a 55-47 lead with 2:11 left. Several missed Viking shots were followed by an East foul, and Sun Valley’s high-scoring Vinny DeAngelo took full advantage, going 8-for-8 from the charity stripe in the fourth quarter. Teammate Isaac Kennon went 5-for-6 from the line in the final period, and overall, the Vanguards went 20-for-22 from the free throw line.
“The foul situation hurt us, with our guys getting into foul trouble,” said Durant. “It takes away from the offense when you have to keep moving guys in and out because they’re in foul trouble. It comes down to making shots – they made them, and we didn’t. We missed some easy ones around the rim. Sun Valley had to make key shots to beat us, and, to their credit, they did.”
West Chester East made one last comeback attempt when Carr drove inside for a three-point play with 1:11 left to cut Sun Valley’s lead to 56-52. DeAngelo was fouled, and made both of his free throws; then a Viking miss from underneath was followed by a foul on Kennon, who made both of his free throws to give the Vanguards a 60-52 lead with 43.7 seconds left.
“I’m proud of our kids,” said Durant. “The loss hurts, but the pain’s going to go away. You’ve got to be proud of being here.”