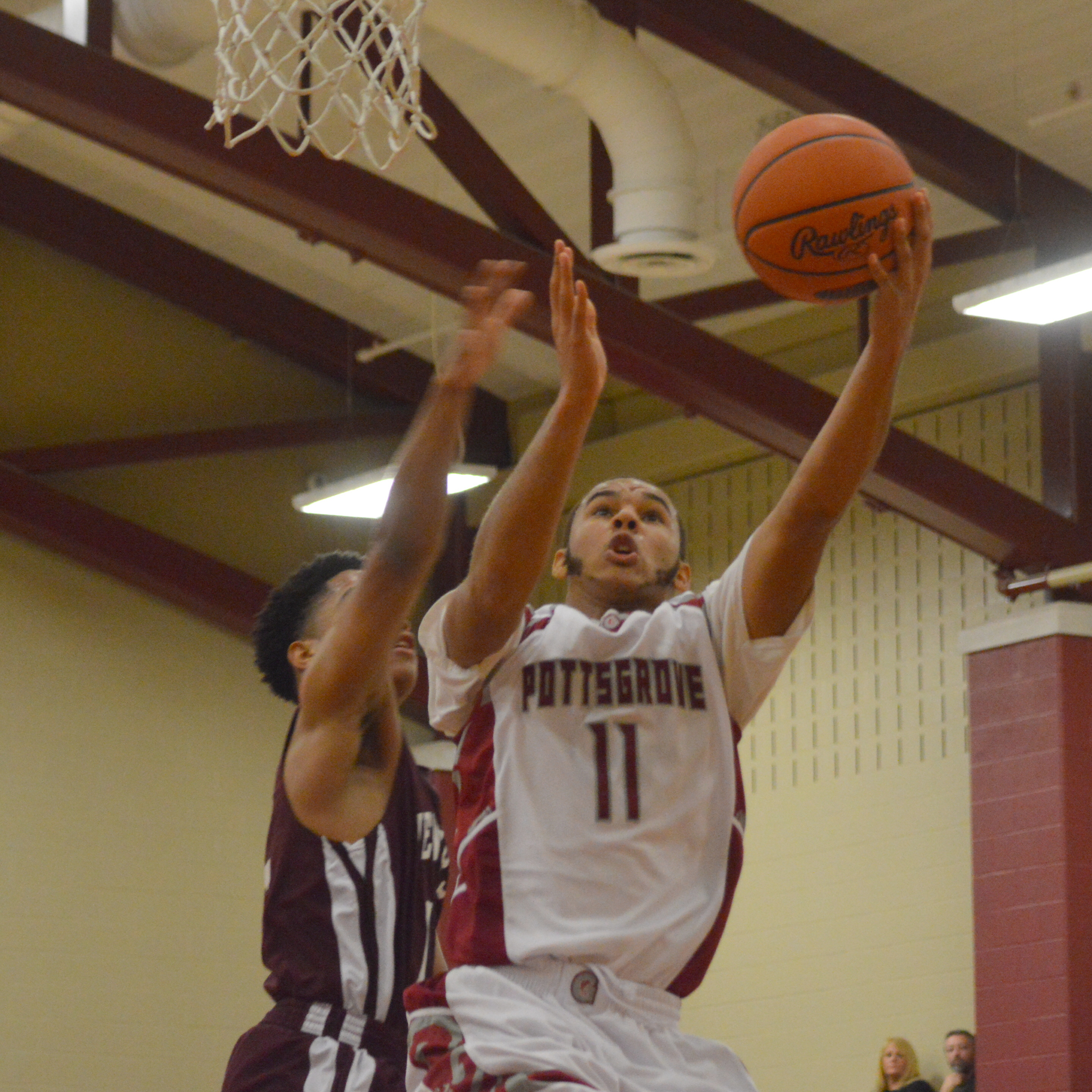 POTTSGROVE >> Unable to solve Pottsgrove’s pesky pressing and trapping, West Chester Henderson nonetheless was hanging in there deep into the first half Saturday night.

Still, with the score tied at 17, the Warriors, with 14 first-half turnovers, looked like an overmatched boxer, stumbling toward the ropes, hoping to get saved by the halftime bell.

Instead, Pottsgrove knocked them through the ropes, punching in a dizzying series of threes.

The Falcons hit four straight attempts from beyond the arc – by four different players – in the last four minutes of the first half. Those treys by, in order, Nik Curnew, Louie Gibbs, James Dargan and Nazhir Goldston, set off a first-half-closing 14-2 run, and the Falcons kept the hammer down throughout the second half en route to a 66-42 victory.

“Basically we take turns – whoever’s night it is,” Gibbs said with a smile.

With two wins at the Pottsgrove Tournament, the first one coming Friday night in a two-pointer over Great Valley, a Falcons team with high hopes is off to a rousing start. While another non-conference ‘W’ isn’t a completely accurate barometer, if they keep playing with this kind of intensity, conviction and balance, the Falcons could get over the PAC-10 final four hump.

They’ve been there and turned back the last two years.

“We’re trying to make it to the final four, and we definitely have got to win it,” said guard Nazhir Goldston, part of an experienced, hungry, senior-heavy group and the game’s high scorer with 18. “I think we’re going to win it. We’ve failed twice in a row, last year in the championship game, so we have to win it this year.”

Defense like this wins championships. Pottsgrove, pressuring all over the floor, forced 23 turnovers through the first three quarters. The defense fuels their offense, creating constant transition opportunities with a numbers advantage, leading to layups and open looks from three-point land.

“We like to get up and down the floor, pressure teams and make them make mistakes,” Goldston said. “Our defense feeds into our offense.”

Early on it didn’t look so bleak for Henderson. Despite eight first-quarter turnovers – four via the press – they were down only 11-8. Pottsgrove missed a few open shots to help keep it close, but it was only a matter of time. Up-tempo Pottsgrove time.

Three Henderson turnovers came during the four-straight three-ball spree. From a 31-19 halftime lead, the Falcons turned that 14-2 run into 25-4 bulge by the four-minute mark of the third quarter. At that point they had doubled up the Warriors, 42-21.

Eight more Warrior turnovers came in the first four minutes of the third. Goldston pilfered three balls in the first 2:15 of the period and scored seven points in the stanza. He and Deyon Doctor, the talented quarterback playing like a receiver on fast breaks, ran a layup drill for much of it.

“We wanted to take it over,” Goldston said. “Friday Great Valley started to come back on us.”

Eight Falcons scored. Doctor had 10, and Dargan and Juwyn Goldsmith each had nine.

Pottsgrove made seven 3-pointers. As a team that can run you into the ground and shoot holes in a defense from deep, they look dangerous for the long haul.

West Chester Henderson didn’t make a three and had only one double-figure scorer, Ryan Brida, with 10.