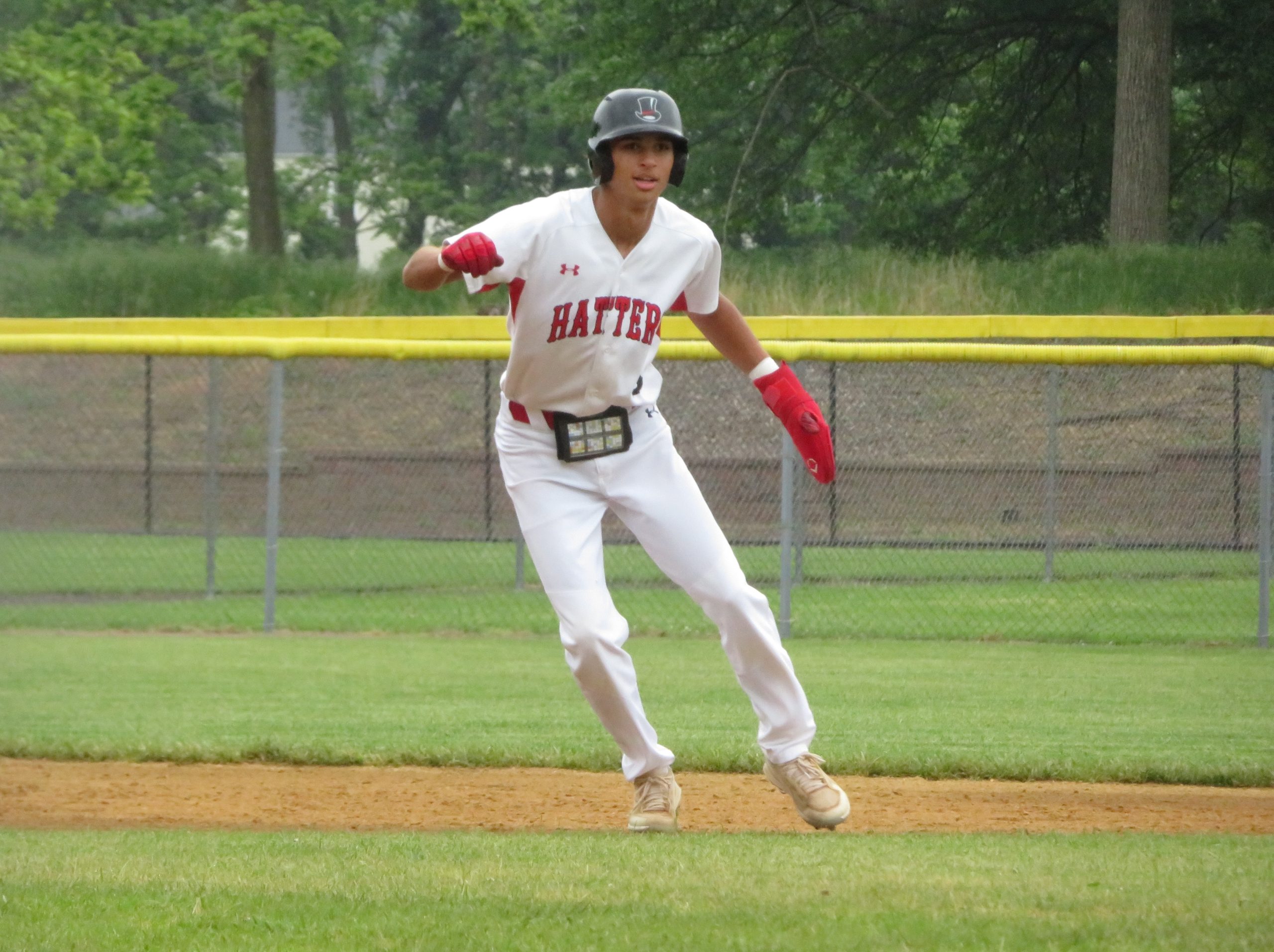 In a win-or-go-home District 1-6A fifth-place playback game, Hatboro-Horsham had the top of the order due up in the bottom of the eighth inning, tied 2-2 with Souderton, with a trip to the state playoffs on the line.

Leadoff man Trey Porter’s batting average was in the high .400s and jumping on early fastballs was a big reason why. Before stepping into the batter’s box, he talked to Hatters coach Pete Moore.

“‘If he hangs a slider, can I destroy it?’” Porter recalled asking his coach. “He said, ‘Yeah go for it.’ He hung me the slider first pitch and I just ripped it down the line.”

The junior took early-count breaking balls for strikes in his first two at-bats, but didn’t make the same mistake again. He led off the inning with a double, advanced to third on a Jack Elwell bunt and, after a pair of intentional walks, scored the game-winning run on a Will Bruner single to send the Hatters to the state playoffs.

“It’s scary (Porter’s) only a junior,” Moore said. “He’s just so advanced in his feel for the game and his physical tools are obviously off the charts. The sky is the limit for what he’s going to do in his career.

“His combination of power and speed is incredible. He runs like the wind and the ball jumps off his bat – it just comes off different than anybody I’ve ever coached before. We saw it when he was a freshman during the COVID year that got cancelled. All the coaches on our staff – as soon as they saw him swing the bat early that March and that winter they knew that he was going to be a special player for us. But then you have to be able to put it together with the mental side of things and he has an advanced feel for the game. His instincts are tremendous. He knows when to take an extra base, takes advantage of mistakes that other teams make and he plays the game as hard as anybody. When you have that combination of the ability that he has and also his desire to be the best it leads to special things.”

Porter’s talent mixed with dedication resulted in big numbers across the board in 2022. The 6-foot-1, 165-pound centerfielder hit .488 with six home runs, six doubles, 26 RBIs, 36 runs scored and 21 stolen bases in 24 games. Porter is the Reporter/Times Herald/Montgomery Media 2022 Baseball Player of the Year.

Hatboro-Horsham’s Trey Porter, left, celebrates after scoring a run against Coatesville in the District 1-6A quarterfinals. (Ed Morlock/MediaNews Group)

Porter, a Warminster native that moved to Horsham in elementary school, won the triple crown for leading the Suburban One League Liberty Division in batting average, home runs and RBIs, a feat that Moore, who’s in his 21st year coaching Hatboro-Horsham, doesn’t remember being accomplished.

“I’ve never seen it, never heard of it,” Moore said. “The closest would probably be Dylan Tice (Pennridge grad drafted by Mets in 2015). I don’t know if he did it or not, but he certainly had that skillset that would allow somebody to do it, but I’ve never seen anybody else that has come close to it. Then you add in on top of the triple crown he stole 20-some bases this year and I think only Jack Elwell from our school had more stolen bases than he did.”

A strong lineup from top-to-bottom for the SOL Liberty champs helped Porter achieve the rare title of triple crown winner.

“We had Noah Schlosser and Zach Greenberg hitting ahead of him all year in the eight and nine hole,” Moore said. “Those guys certainly could have been at different spots in the order, but with us knowing what we had with Trey in the leadoff spot we wanted to have a couple guys ahead of him. Zach handles the bat really well, so it was almost like a 1-2-3 with Noah being the second leadoff hitter in the eight hole and Noah handling the bat well in the nine hole and you get the table set for Trey.”

“Our one-through-nine can just hit all day,” Porter said. “Our eight hole hit over .300 this year – Noah Schlosser. Our catcher Zach Greenberg hit above .250, too, which was amazing to be able to hit with runners on base, especially in the leadoff position.”

Defensively, Porter’s athleticism allowed him to cover a ton of ground in the middle of the outfield and his arm made opposing runners and coaches think twice about trying to take extra bases.

Porter also helped the defense by joining the pitching staff. Knowing that the Hatters didn’t have great depth beyond starters Cole Fisher and Stephen Plefka, Porter worked his way into the rotation and went 4-1 with a 3.84 ERA in 10 appearances. He struck out 33 batters to 16 walks and allowed 48 hits in 34 2/3 innings.

One of Porter’s best starts of the year came when H-H needed it most. He went 5 1/3 innings in a win-or-go-home district playback game against Perk Valley. He allowed one run – unearned – on five hits in an 8-3 win.

Earlier in the year, he came up one out shy of a complete game in a win over Upper Dublin. In 6 2/3 innings, Porter allowed three runs – one earned – on four hits in a 7-3 win. He struck out six batters to one walk. The win ended up being the difference between the Hatters being outright SOL Liberty champs instead of sharing the crown with the Cardinals.

Porter still has another year with Hatboro-Horsham, but is already committed to play college baseball. In October he announced that he will continue his academic and athletic careers at the University of North Carolina at Greensboro.

The coaches, players, campus and facilities all played a role in Porter choosing UNC-Greensboro over his other finalists, Penn State University and Elon University.