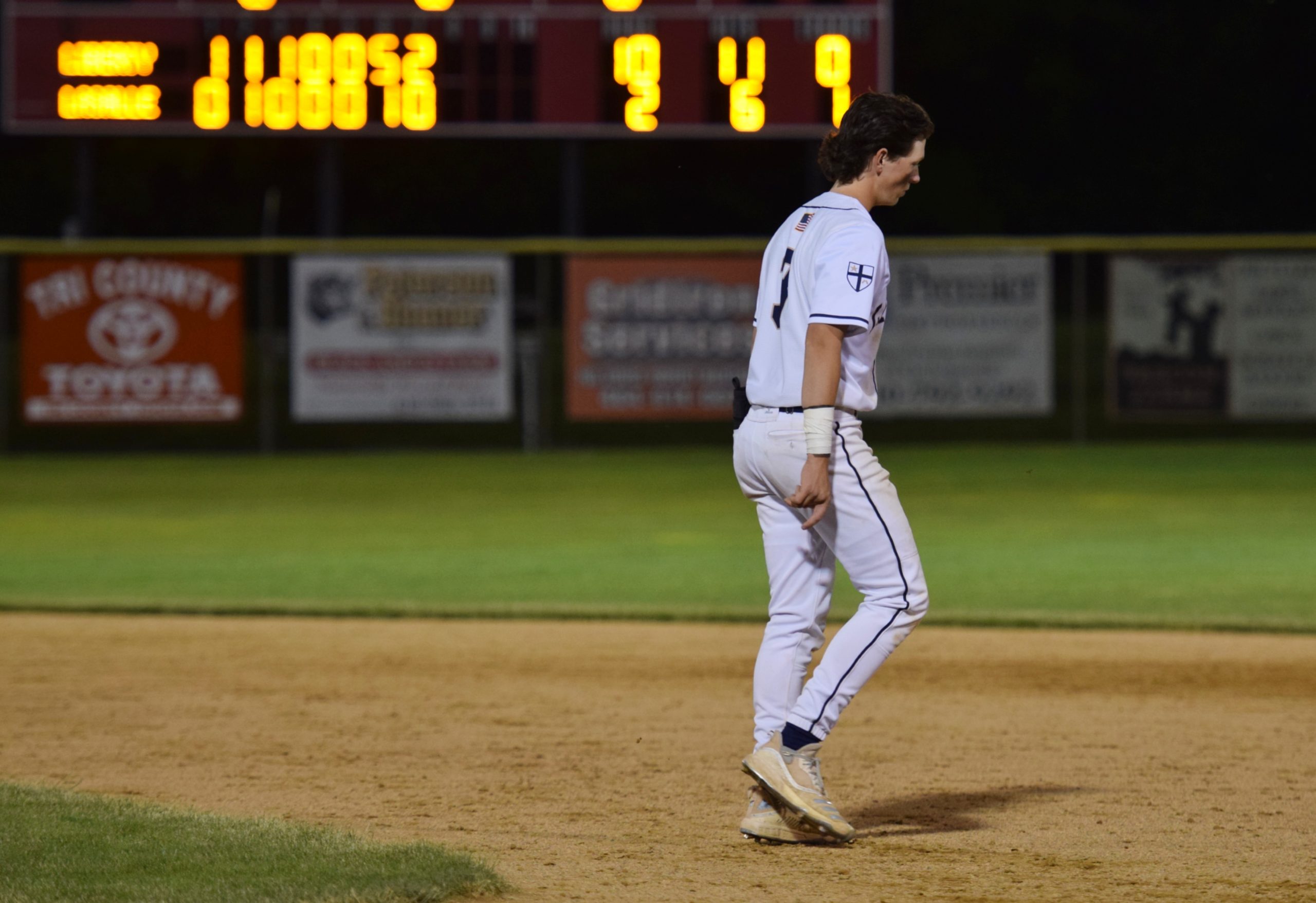 La Salle third baseman Jacob Overton (3) walks toward his teammates in the outfield after La Salle was defeated by Liberty 10-2 in a PIAA 6A quarterfinal Thursday at Boyertown. (Austin Hertzog - MediaNews Group)

BOYERTOWN >> As the seniors of La Salle’s baseball team gathered around first base for a group photo, the scope of their surroundings became more clear.

While the Explorers had seen their PIAA 6A title defense ended by a Liberty team that was hitting and pitching on all cylinders almost from the first at-bat, the fact La Salle was even back in the round of eight was an accomplishment of itself. Seven of the team’s nine starting batters, their top postseason pitcher, plus a handful of other contributors, moved on after winning states last season, so the 2022 team was going to have to figure itself out.

A 10-2 loss to the District 11 champion Hurricanes at Boyertown’s Bear Stadium ended La Salle’s season in the PIAA quarterfinals on Thursday, but the Explorers knew they’d accomplished plenty just getting that far.

“Honestly, in the beginning of the year, I never would have thought we would have made it this far,” Explorers senior Kevin Kell, the team’s ace pitcher, said. “I’m very happy with what we were able to do.”

Kell, who played first base Thursday after pitching in Monday’s win over Pennsbury, went 3-for-3 with an RBI off Liberty pitcher Hayden O’Neill. O’Neill was outstanding for Liberty, throwing a complete game while giving up just five hits and striking out six batters while catcher Reece D’Amico had two RBI singles and made a key play in the sixth inning tagging out a runner at home to erase a run and end the frame.

Liberty scored one run in each of the first three innings and broke the game open with a two-out rally in the sixth, where six straight batters reached base and five of them came in to score. With the path cleared for a new 6A state champion, Liberty will face Hazelton in Monday’s semifinals. La Salle saw its string of three consecutive PCL titles snapped this spring and wasn’t able to defend its state title back in State College. Weighing in that most of this year’s top contributors didn’t have a sophomore season due to Covid-19 and the attrition that usually comes from winning a state title with a veteran-laden team however, Explorers coach Kyle Werman felt this group accomplished plenty, just not all that it hoped for.

“It’s a lot to put on new guys to fill that void, so it was something to see over the course of this year, that growth,” Werman said. “This result really hurts and we wanted more but to see where we were at the start of the year and where we are now, I’m really proud of the group and proud of the maturity of these seniors.”

Seniors Brian Baquero and Jephson Hadson-Taylor were the only two Explorers in the lineup Thursday who played in last year’s state championship game and Kell was a top arm on the team. Outside of them, it was new ground for most of this year’s seniors including right fielder Aidan Bretschneider, who seized his one year of opportunity by earning a starting spot and becoming one of the team’s best hitters.

It wasn’t a scenario exclusive to Bretscheinder or left fielder Tommy Convey or infielder Jacob Overton or even exclusive to this year’s senior class. La Salle shortstop Jephson Hadson-Taylor flips to second base for a force out against Liberty during a PIAA 6A quarterfinal Thursday at Boyertown. (Austin Hertzog – MediaNews Group)

“How many kids you think tried out? Probably 150?,'” Bretschneider asked Kell.

“It was a lot. It’s always a lot,” Kell responded.

“Basically, we’re always competing. We might not have started games before but we’ve been in that competitive atmosphere,” Bretschnieder said. “You have to compete for a spot to make the team, then you have to compete to start. I think competition is what fueled us on this run, you listen to the guys from last year – I mean I still text Jake Whitlinger all the time – they told us just to find what works for us.”

What worked for this team was personality. Not that last year’s team lacked personality, or that the 2018 state semifinalists or 2019 PCL champions didn’t have it either but this group managed to meld its eclectic temperaments into a winning formula. It wasn’t an “add water, see results,” mixture and it did take time but the Explorers did eventually come together.

“Last year, they had a way of leading verbally but with this year’s seniors, we kind of led by example,” Kell said. “We let our talents show and that’s how we could get others to follow.”

“We dropped the first two PCL games, we were really serious with both of those games but then we kind of laid back a little bit and started loving the game we were playing,” Bretschneider said.

Trying to simply pick up where the 2021 team stopped wasn’t going to work for this year’s squad and the players had to make it their own. Once they did, that’s when the growth started to come. Kell and Bretschneider both agreed they don’t see any letdown next year with players like Tahir Parker and Matt Gannon back in the lineup plus whoever emerges to seize their own role plus the foundational pillars of the program serving as a guide. La Salle center fielder Tahir Parker breaks his bat on a groundout against Liberty during a PIAA 6A quarterfinal Thursday at Boyertown. (Austin Hertzog – MediaNews Group)

On the field Thursday, Werman stated he was disappointed to see the season end because he didn’t feel this team was a finished product yet either. For whatever reasons, from a confounding spring in terms of weather, various injuries and their usually inopportune timing or spells of inconsistency, La Salle never quite seemed to reach its zenith.

That didn’t make it any less enjoyable though.

“Every day was different,” Werman said. “We had some really different characters. Aidan Bretschneider, he’s a rugby player and that personality is really unique at La Salle. We had some guys with some edge to them and some fire, and that’s what I’ll remember as a coach, just trying to corral that energy these guys bring, which is really fun and when directed the right way, really powerful.

“There was definitely a unique kind of identity for quite a few guys in this group.”