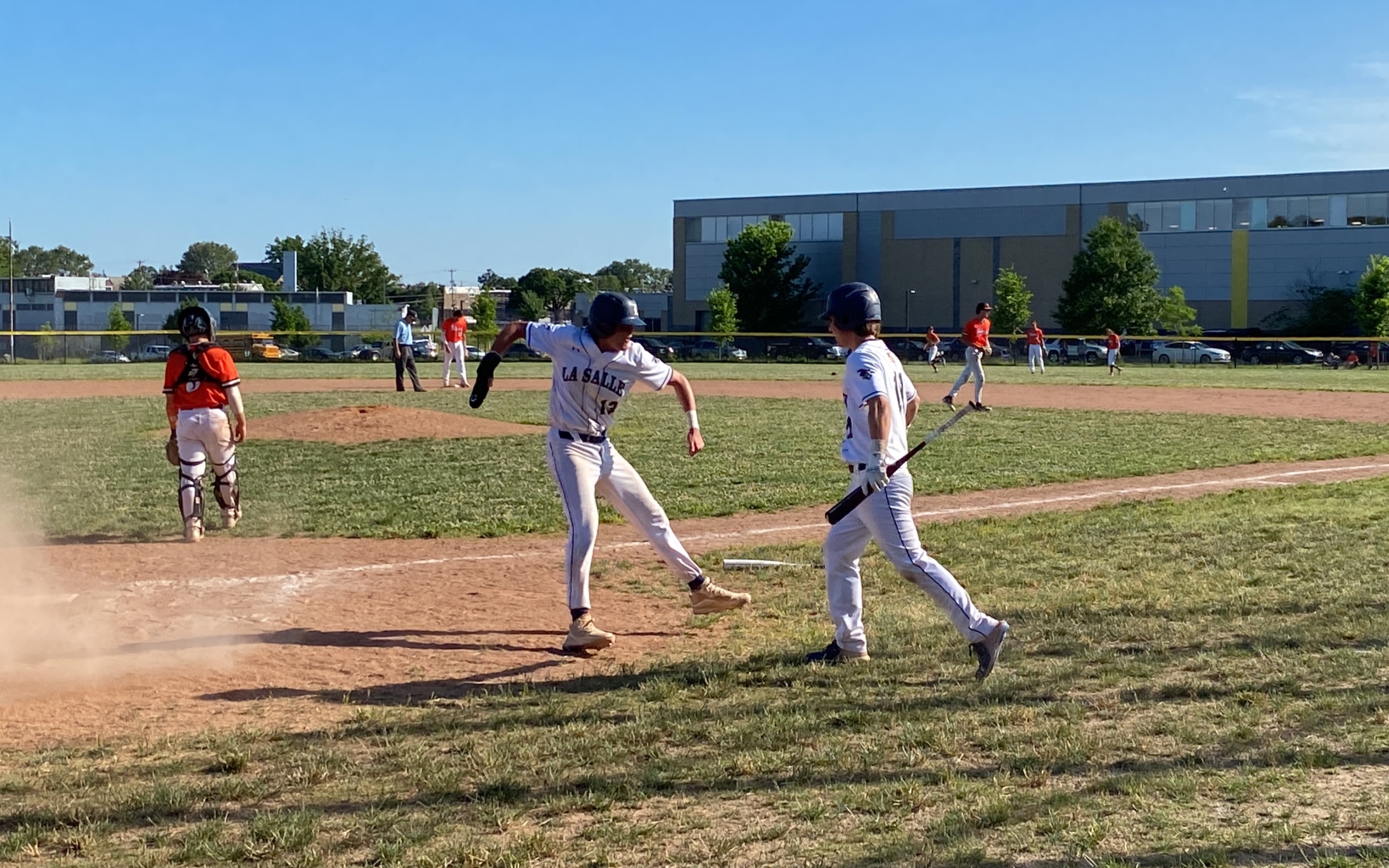 PHILADELPHIA >> La Salle baseball coach Kyle Werman was quick to recall the recent chances the Explorers had with the bases loaded and no outs and could not find a way to score a run.

La Salle, however, did not come away empty when the same situation happened once again in Monday afternoon’s PIAA-6A first round matchup with Pennsbury.

Jephson Hadson-Taylor broke a 2-2 tie in the bottom of the third inning with his bases-loaded infield single while Kevin Kell followed with a sacrifice fly to right, putting La Salle up two.

“We’ve left some runners stranded in big games before so it was nice to get them in this game,” La Salle senior left fielder Tommy Convey said.

The Explorers tacked on three more runs in the frame to build a 7-2 lead then held off the Falcons to earn a 9-6 victory at Lincoln High School.

“We talked about approach and how to be competitive and it started with Jeph fighting off a bunch of pitches,” Werman said. “Looked overmatched on a couple but kept grinding and seeing if he could get a ball in play and a good thing happens. Kevin Kell, same thing with his sac fly.

“Those are the at-bats that really turn the tide as you got contact off a guy that was really on the defense. Pitcher’s making his pitches and we didn’t let in and I think that was the story.”

Convey, hitting eighth in the lineup, finished 2-for-3 with a pair of doubles – his second driving in a run to make it 6-2 in the third – and three RBIs. Starting pitcher Kell, meanwhile, threw six innings in earning the win while at the plate collected two RBIs as La Salle, the defending state champ, advanced to the quarterfinals for the third time in the last four PIAA tournaments.

“We’re kind of playing with a chip on our shoulder,” said Kell, a right-hander committed to Fairfield. “We’re representing the PCL here and showing how good it is. If we roll up on these teams that are in their respective districts like Suburban One, beating each other up, it really shows how good the PCL is with us, Bonner, and Wood making a run right now.

“We’re just playing without any worry of the consequences. We have this little motto, it’s ‘Surrender the Outcome.’ That basically means if you just have the focus on what you can do and the results’ll take care of itself. You can only control what you can control. And I feel like we did good with that today.”

Jacob Overton was 2-for-3 with an RBI and a run scored while Aidan Bretschneider went 2-for-4 with two runs scored as the Explorers recorded 10 total hits. Tahir Parker and Brian Baquero both scored twice.

“We’ve seen a lot of good arms all year and we’re definitely used to velo so I don’t think we were really that fazed,” Convey said. “We’ve prepped for it and practiced with the pitching machines and I think we always feel confident against those pitchers.”

Joe Tiroly was 3-for-3 with a home run, three RBIs and two runs scored for Pennsbury. The Suburban One League Patriot Division champs, who placed fourth in District 1, finished their season at 19-6.

“You’re just disappointed because you put all that time and energy in,” Falcons coach Joe Pesci said. “And we tell the kids, ‘Look, it’s one moment, it stinks but we had, as a whole, we had a great season. You won the league title, district final four and you lost here. So you’re upset here and it stings but you have to look at the season as a whole and we had a great season.’”

Making its first state appearance since 2017 when it won the 6A title, Pennsbury took a 2-0 in the top of the second on Sam Labrecque’s two-out, two-RBI single up the middle. But La Salle pulled even in the bottom of the inning on a Convey two-out, two-RBI double to left center.

After the Explorers’ five-run third, Pennsbury cut the margin to 7-4 in the top of the fourth on Joe Tiroly’s two-run home run to left. La Salle, however, responded with two runs in its half of the frame to go back up five.

The Falcons pulled to within 9-6 in the sixth after a balk and Tiroly RBI single but in the seventh Cole Kochanowicz came in for Kell and put Pennsbury down in order.

Kell went six innings in claiming the win, allowing six runs – all earned – on five hits. He walked one, hit two batters and struck out five. Kochanowicz had two strikeouts in picking up the save.

“My off-speed in the beginning of the game wasn’t there,” Kell said. “It was flattening out. I couldn’t locate it well but I overcame that a little bit but my fastball control was there all day.”

Falcons starting pitcher Callan Fang took the loss, giving up seven runs – all earned – on seven hits in 2 2/3 innings. He walked one, hit one batter and struck out four.

The bottom of the third started with Parker getting hit by a pitch. Bretschneider lined a single to center with Matt Gannon’s bunt single loading the bases with no outs.

With the infield in, Hadson-Taylor reached out and chopped a ball past a diving third baseman with no play for the shortstop – the infield single scoring Parker for a 3-2 La Salle lead.

The next at-bat, Bretschneider got a hand to the plate just ahead of the tag to score on Kell’s RBI sac fly.

“It’s taken some time for us to settle in and kind of find an identity offensively,” Werman said. “And I’m just proud of the way they attacked and executed an approach against a good arm, multiple arms that they brought in.”

After a double steal put runners on second and third, Baquero’s grounder was snagged by first baseman Labrecque, who threw home but Gannon slid in safely to make it 5-2. Hadson-Taylor attempted to score on the play when home plate was left unattended but Fang hustled to make a diving tag.

Baquero, who went to second on the play, scored for a 6-2 as Overton dropped a two-out RBI single into right center.

Convey pushed the Explorers’ lead to 7-2 by ripping an RBI double into the left-field corner to bring home pinch runner Jaylen Ivey.

In the top of the fourth, Justin Mitrovich led off by getting hit by a pitch while Tiroly followed by connecting on a two-run runner homer to left to get the Falcons with 7-4.

Parker walked to start the bottom of the fourth then went to third on a Bretschneider single. Parker scored on passed ball while Kell’s two-out RBI single up the middle plated Bretschneider for a 9-4 lead.

Pennsbury chipped two runs off its deficit in the sixth. Ryan Zuckerman began the inning getting hit by a pitch while Mitrovich doubled to the right-field corner – the ball just eluding the right fielder’s diving reach – to put runners second and third with no outs.

A balk brought in Zuckerman while a Tiroly RBI single through the right side made it 9-6 but a 6-4-3 double play then a groundout to third kept La Salle’s lead at three.