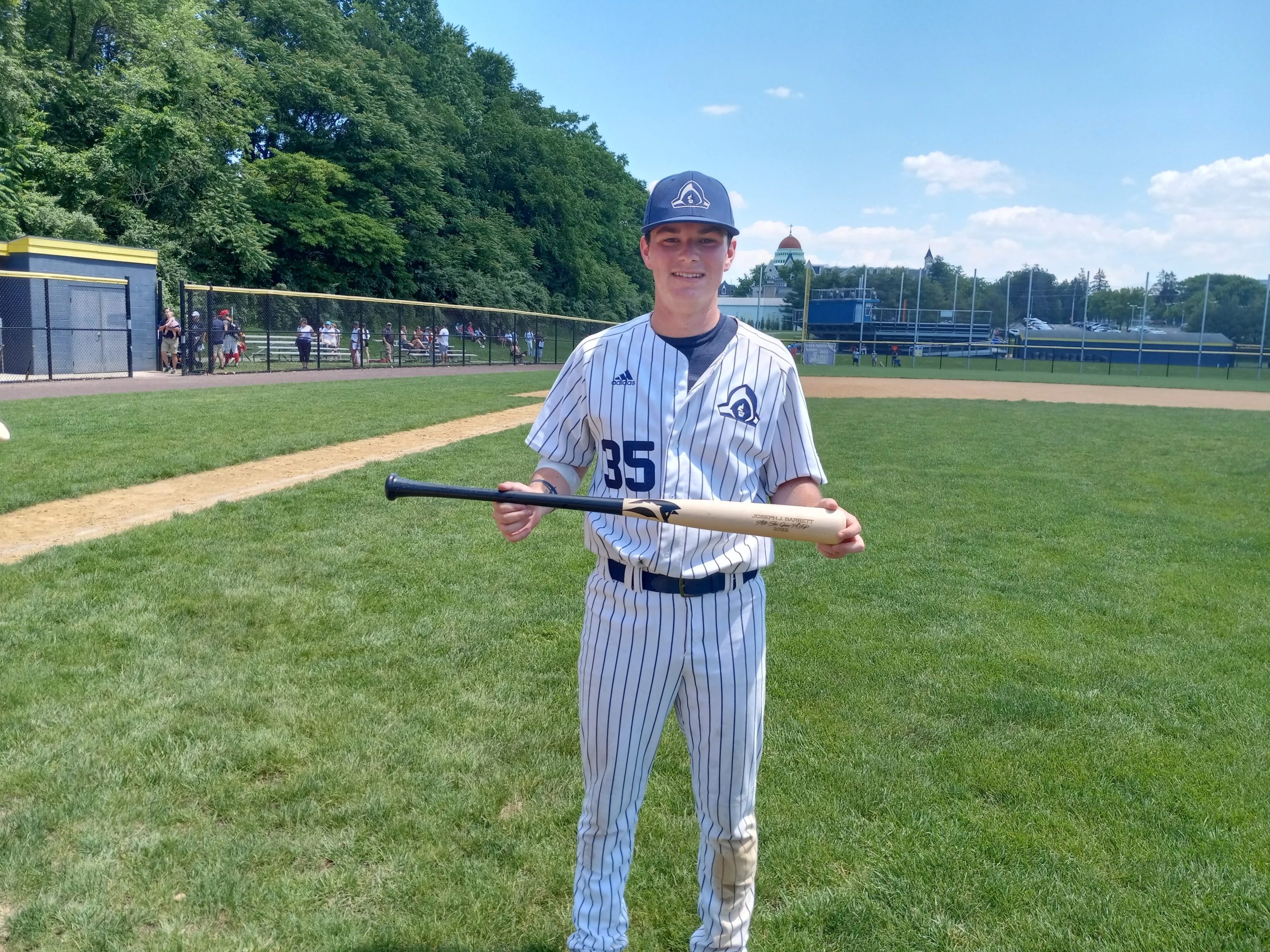 ASTON — With both teams short of players, especially pitchers, due to a few teams still alive in the PIAA baseball playoffs, Malvern Prep’s Mike Gordon knew he was going to get the call to throw for the Del Val All-Stars in the 36th Joseph J. Barrett Memorial All-Star Game Saturday.

The Ridley resident didn’t know when or how long he would be asked to pitch, but he was ready when the call came in the fourth inning.

Gordon threw four perfect innings to get the win and had a double and a run scored to lift the Del Val over the Central League All-Stars, 3-1, at Neumann University’s Bruder Field.

The Malvern lefty was an easy choice for Most Valuable Player honors.

Colby McNeely of Haverford School started and went the first three innings. He allowed two hits, one earned run, struck out three and walked three. Gordon entered the contest with game tied, 1-1, in the fourth inning and retired all 12 hitters he faced. He struck out the side in the fifth inning and closed the game with back-to-back punchouts to finish with five Ks.

“My changeup was working well,” said Gordon, who will play baseball at Pitt Community College in Winterville, N.C. “I was able to paint the corners with my fastball. The catchers were calling good pitches. It all worked out.”

Gordon also played a key role in the fifth inning when the Del Val scored twice to break the game open. He ripped a one-out double, moved to third on a bloop single by Sun Valley’s Vincent Proietto and scored on a throwing error by catcher Patrick Collins of Haverford High. Three batters later Mark Zecca of Cardinal O’Hara singled home Proietto with an insurance run that Gordon would not need.

While Gordon was somewhat unhittable on the mound, Will Ferris of Haverford School had trouble getting out of the way of pitches. He was hit twice, the second one coming with the bases loaded in the bottom of the third inning, forcing McNeely home with the Del Val’s first run.

“One of them, the one that hit my left thigh, is still stinging,” said Ferris, who will play at Dickinson College.  “The other one just nicked my hand. That didn’t hurt at all.”

Springfield’s Cody Grande had the only hits for the Central League. He belted a single to center field in the first inning and then ripped an RBI double in the top of the third inning to chase Springfield teammate Joey Little home.

Gordon made sure that’s all the runs the Central League would get.

“Playing in this game is a privilege,” Gordon said. “It’s fun being out here with all the guys. The game’s important, you want to win, but it’s a fun game. You’re used to all these games where you’re fighting for a spot in the playoffs, but his is a game where you come out and play with guys you don’t normally play with and have fun.”

NOTES >> Joey DeMucci of Bonner-Prendergast, Owen Mathes and Dillon Can from Marple Newtown and Strath Haven’s Mike Valente and Matt DeFalco were selected to play in the game but could not participate because their teams are active in the PIAA playoffs. … Chichester’s Anthony “A.J.” Ricco and Ridley’s Jimmy DiCarlo were the winners of the Joseph J. Barrett memorial scholarships … Garnet Valley’s Ryan Wootten and Kevin Henrich of Bonner-Prendergast were the recipients of the Cakey Dougherty/Jumbo Faulkner Award as the top pitchers in Delaware County. … Bonner-Prendie’s Steve DeBarberie was named winner of the John Mooney Coach of the Year award. … Bill Ford Sr. was the first recipient of the Rich Merchant lifetime achievement award.