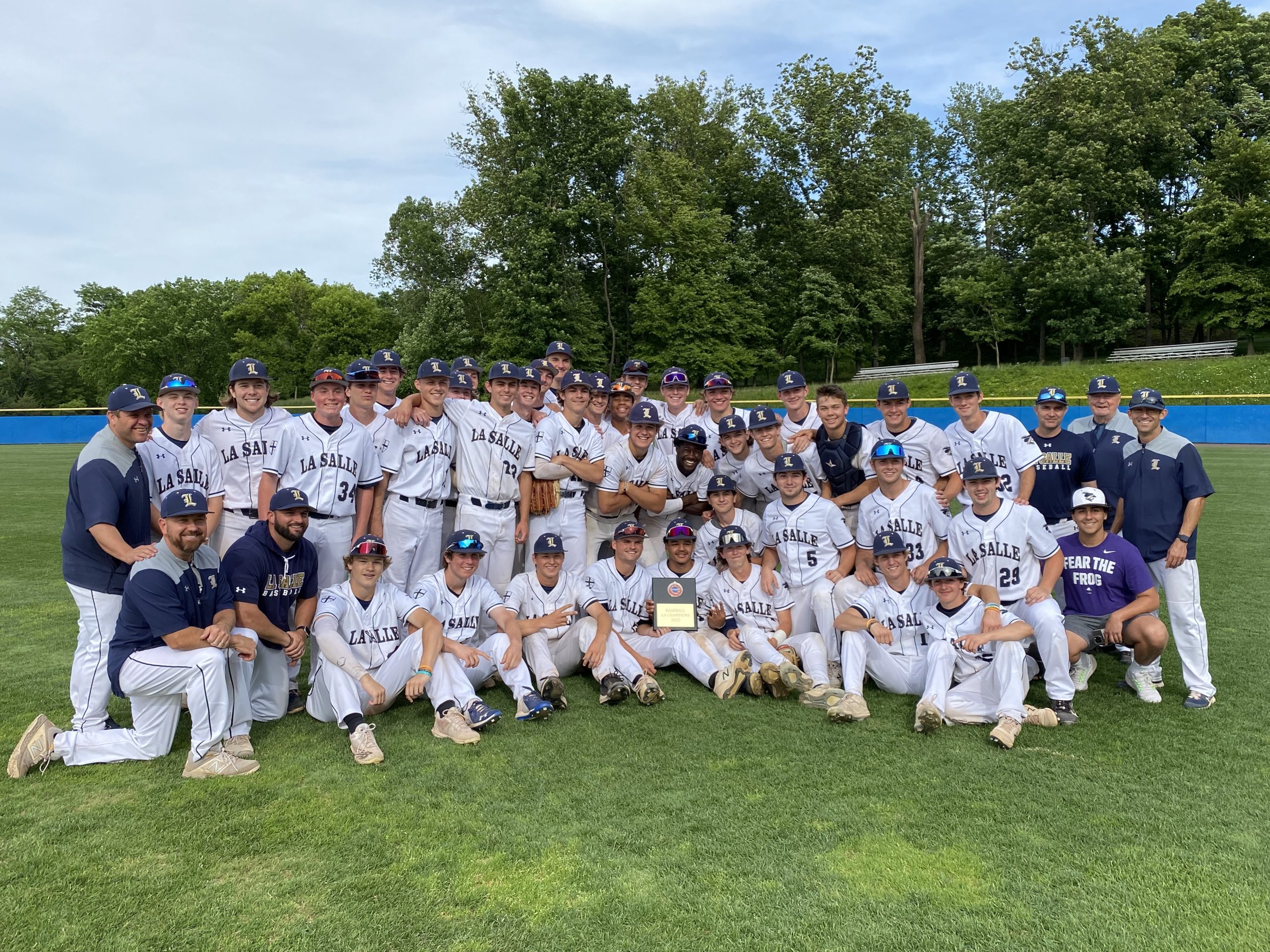 The La Salle baseball team takes a photo with the District 12 championship trophy after defeating Olney in the Class 6A final on Friday, June 3, 2022. (Mike Cabrey/MediaNews Group)

SPRINGFIELD >> Aidan Bretschneider was preparing to pitch Thursday when weather suspended the District 12-6A baseball final with La Salle up 3-0 on Olney after two innings.

When the game that began at Archbishop Wood resumed Friday at La Salle’s Ward Field, Bretschneider – an All-Philadelphia Catholic League first-team selection for his play in the outfield – was up first on the mound for the Explorers.

“I was warming up in the bullpen and I was going to go in then it got rained out,” he said. “So he’s like you’re starting today. So I was like ‘All right,’ and then just came in.”

Bretschneider got into a jam in the top of the third, as a hit batter, an error and a walk loaded the bases for the Trojans with one out. But the senior Monmouth commit found his way out of it unscathed with a strikeout then a lineout to the first baseman.

“I was kind of just overpitching a little bit,” he said. “Just my curveball was missing outside so coach just kept calling fastballs and then I was blowing it by them.”

After maintaining its three-run lead, La Salle had no trouble securing a fourth consecutive district title. In the bottom of the third, the Explorers sent 13 batters to the plate, posting nine runs for all of the afternoon’s scoring as they rolled to a 12-0 five-inning victory.

“You really have no control over the weather and we talked to our guys about look you can script things out but life’s unpredictable and you got to go compete,” La Salle coach Kyle Werman said. “At the end of the day somebody’s got to go win a ballgame. I think the way it mapped out having a lead, starting a fresh inning, we had some younger guys mixed in so there was an opportunity for it to feel like a start for guys that hadn’t started the game.

“So I think that was unique and as I coach I was kind of excited to see that present itself and get some guys some guys opportunities once the game opened up a little bit.”

“We have a baseline of talent that if we play clean baseball we have a chance to beat anybody,” Werman said. “But baseball doesn’t necessarily hand you wins for being talented, we’re going to have to go out and compete. And we’ve had our ups and downs this year where we’ve learned and dealt with some adversity and I’m hoping we’re at a point where that can all come together at the right time which is what you need to do in the playoffs.”

The Explorers finished 8-4 in PCL play, which earned them the sixth seed in the league playoffs. They knocked off No. 3 Father Judge 6-1 but in the semifinals fell to No. 2 Archbishop Wood 6-1, ending their run at the fourth straight Catholic League crown.

“The general trend’s been up but you have setbacks,” Werman said. “I felt like we played very well against Judge, left guys on base but still found a way to win. Played well against Wood and then kind of fell apart. And I think that’s some of the inconsistencies and we’re learning and that hurts and I hope that that pain leads to some adjustments and we put it together when it really matters in the state playoffs.”

In Thursday’s portion of the district final, La Salle scored three runs in the bottom of the first while Friday used five walks, three extra-base hits, three errors and a sacrifice fly to plate nine runs in its half of the third – eight of those coming with two outs.

Colin Kuczborski began the bottom of the third with a walk while a Colin Dunlap one-out double to left center put runners on second and third. Pate Banmiller’s RBI sac fly to right scored Kuczborski for a 4-0 lead.

After Casey Nealon ripped an RBI triple to left, La Salle drew three straight walks – the last by Nathan Kress with the bases loaded bringing in a run to make it 6-0. An error on a pop up to the shortstop allowed two more runs home for an 8-0 advantage.

“They’re short-handed – their shortstop’s hurt, their best pitcher threw 100 pitches the other day and that’s not their best version,” said Werman of Olney. “And had they been fortunate with weather last Friday we get a very different version, different ballgame with Olney. But they’re fun to compete against, they clearly love the game and it’s just fun energy out here today.”

Eddie Jeitner scored on a wild pitch before Kuczborski’s RBI triple down the third-base line put the lead at 10-0. After a Frank Provenzano walk, an error on Dunlap’s flare to right brought in a run with another scoring after an errant throw on the play to make it 12-0.