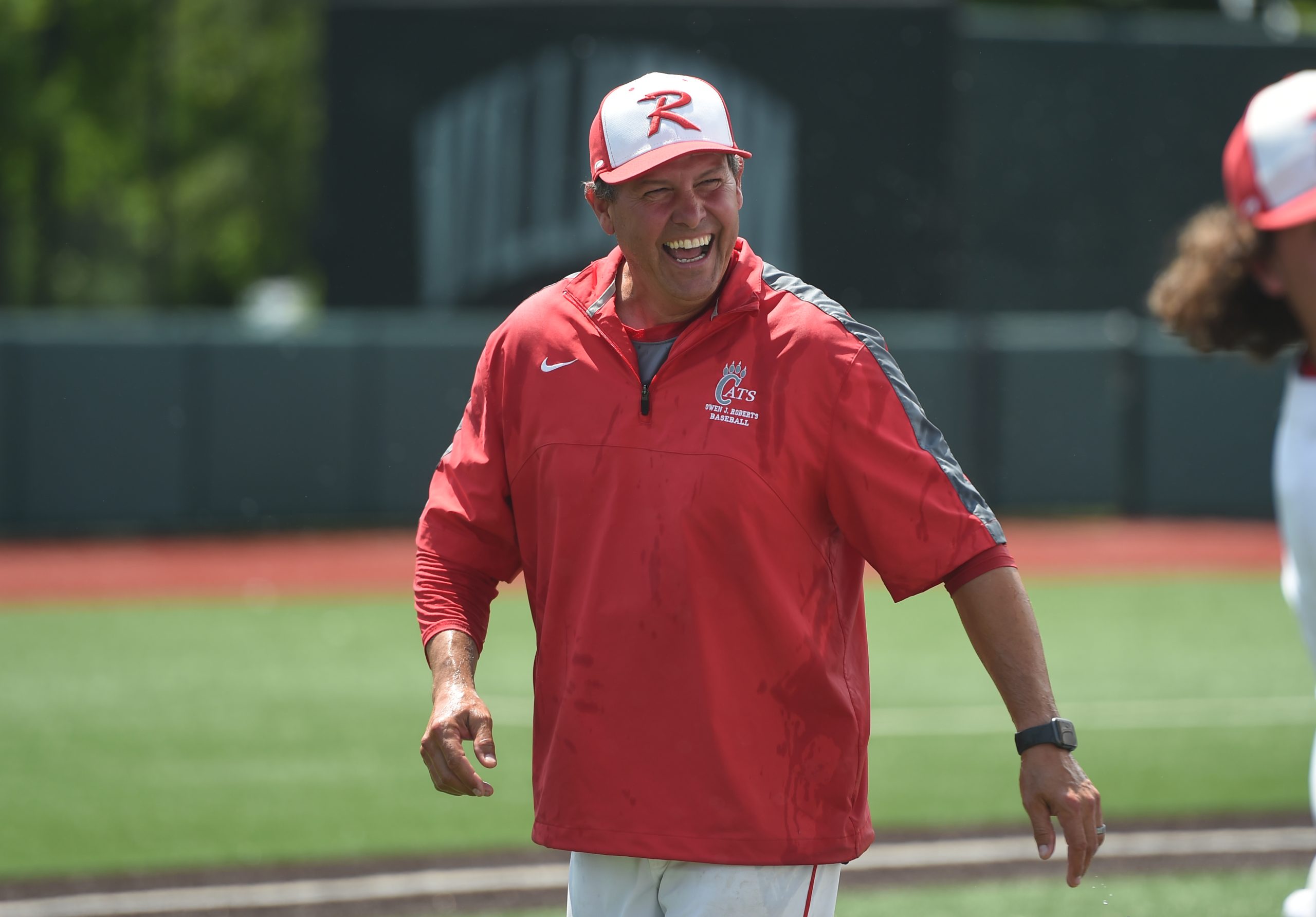 PLYMOUTH MEETING >> Coming into Thursday’s District 1 6A championship game between West Chester Henderson and Owen J. Roberts, the two squads have something more in common than their respective 22-1 records. The two, who met in the 2010 PIAA 6A championship game (won by Henderson) boast two of the longest-tenured head baseball coaches in the state of Pennsylvania.

And with a roster that changes every year due to graduation, the consistency these two programs have had is a big reason both teams are annually at the top of the District 1 baseball landscape. The Warriors’ Luke McNichol is currently in his 35th season as head man at West Chester Henderson while the Wildcats have been led by Greg Gilbert for the past 25 seasons.

This time Gilbert got the better of the Warriors as Owen J. Roberts rallied for six runs in the top of the seventh inning to take the district title with a thrilling 7-5 win. But, no matter who won or lost on Thursday afternoon, the two teams exude all that is right about the game of high school baseball.

Both coaches run tight ships that are borne in respect. The two teams always respect their opponents, the umpires and their teammates. With McNichol and Gilbert, there is no room for some of the ridiculous and nonproductive antics that some high school programs have morphed into, making themselves into clowns on the baseball diamond. You will definitely not see or hear either the Warriors or Wildcats chirping constantly and disrespecting their opponents. And the same can be said for the two teams in leaving the umpires alone. You will not see a team coached by these two men embarrass their team or themselves. It is simply not accepted in these two programs.

In a game that unfortunately too many times mirrors our society, the behavior of some teams and coaches borders on the ridiculous. And people wonder why there is an umpire shortage. No, these two old-school coaches teach baseball the right way. After losses they both credit the other team, never criticize their own players and generally keep things as classy as can be no matter how tough the loss.

And Thursday’s district final was no different. The two teams both executed the bunt better than any team I have seen this season and played very clean and hard baseball. The Warriors took a 3-1 lead into the top of the seventh but the Wildcats rallied for six runs to take a 7-3 lead.

West Chester Henderson did not give up however. The Warriors scored two runs, and had the tying run up at the plate before Dylan Grim grounded out to shortstop to give Gilbert his first District 1 crown. The jubilant coach talked about his longevity and what it means to the Owen J. Roberts program.

“I think the consistency we have had in our program has been a big reason for our success,” Gilbert said. “The kids come up to the program and they know what to expect and what is expected of them. And it never changes, the expectations are the same.

“I mean this group has come from behind all season. We were down six runs in our first district game and came back to win. We came back against a good Phoenixville team and won and these kids never quit on each other. They are a very tough bunch to defeat.”

One of Gilbert’s key players is leadoff man Kyle O’Connor who stroked two hits for the Wildcats Thursday. O’Conner likes the fact that Gilbert has been and is his coach.

“The fact he has been here so long really helps,” O’Connor said. “He really is a leader, and coming up it is good to know who you are going to have as your high school coach. I think he is a great coach. He gives us a lot of freedom to do things like bunt and steal bases and we are taught to play the game the right way and respect our opponents.”

Both Henderson and Owen J. Roberts will be moving on to the state playoffs beginning next Monday, and Thursday’s result will not mean anything as far as the PIAA tournament is concerned. In 2010 West Chester Henderson lost the district final to Spring-Ford before capturing the state title, and many District 1 champs have gone down to defeat in the first round of the PIAA dance.

But no matter where these two squads finish, they will both be doing the game justice by playing with respect and professionalism. The two long-term coaches instill that long before the season even starts.

Expectations and rules are set early on and the kids know there will be no variances or exceptions. It is how McNichol and Gilbert have run the game for a combined 60-plus seasons. The respect and teaching moments these two coaches give daily are going to last a lot longer for the young men under their direction than any score on a scoreboard.

And that is the way it is supposed to be.