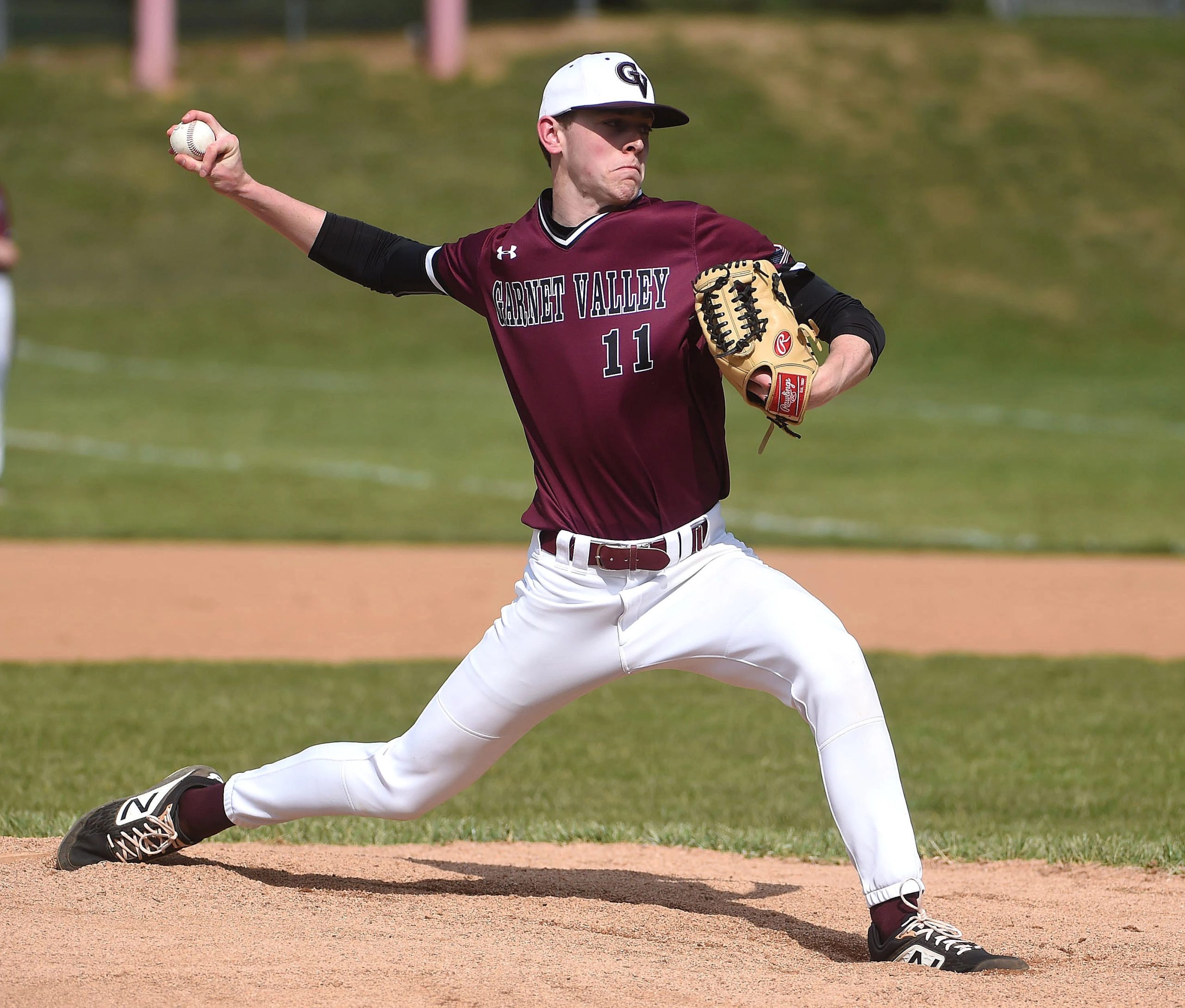 CONCORD — Ryan Wootten, his Garnet Valley baseball teammates fondly point out, has a tendency to sum up his duties on the diamond succinctly.

Pitchers pitch, Wootten will say, to the point of good-natured mockery from his fellow Jaguars.

Well, Wootten is a pitcher. Monday afternoon, the Washington College signee pitched, and beautifully so.

Wootten scattered two hits and two walks in seven stellar innings, the only blemish an unearned run in the first on the way to a 5-1 Central League win over Radnor.

Garnet Valley Zack Liberatore celebrates at second base after hitting an RBI single in the second inning of a 5-1 win over Radnor Monday. (PETE BANNAN-DAILY TIMES)

It took Wootten, a lanky righty who likes to mix speeds and work quickly, time to settle in. But once he shook a bit of errant command in the opening frame, he found his groove and kept the Raptors at bay.

“I think I just started off rough,” Wootten said. “Reed (Farrell, his catcher) came out, kind of calmed me down, he talked to me a little, just normal conversation, and that kind of calmed me down. I knew once I got out of that inning, I was going to try to bounce back and get through the rest of the game.”

The only run he allowed was unearned, leadoff man and opposing pitcher Austin Marx opening the game by reaching on an error and scoring on Pat Mannix’s RBI single to left. That inning involved a pair of walks, Wootten laboring through 25 pitches to escape a bases-loaded spot by inducing a groundout to second baseman CJ Wood.

But from there he rattled off four straight innings needing single-digit pitches. Jack Paccella singled with one out in the third, which would be Radnor’s last hit. He was erased on a 6-4-3 double play started by Nick Van Horn, and the only other Raptor to reach came on an error in the sixth. Wootten recorded 14 outs from the game’s final 14 batters.

“Woot’s obviously our ace,” first baseman Zack Liberatore said. “It’s always a great day when he’s on the mound, because you know he’s going to deal through the whole lineup. We’ve got his back, but he does most of the work for us, so it’s pretty nice.”

Wootten struck out the side in the sixth, then got two more punch outs in the seventh, strengthening as the game wore on. He threw 87 pitches, never needing a reliever to so much as start stretching.

Radnor’s lead didn’t last long, with Garnet Valley tacking on runs in four consecutive innings. Liberatore did the job early, with RBI singles in the second inning, to score Farrell and tie the game, and in the fourth, to plate Colin Simmons and make it 3-1.

In between, Wootten put his team up for good. Logan Nelson singled with one out in the third, then came around to score when Wootten bashed a double to the wall in right-center field, though Radnor right fielder Jude Wallin caught Wootten trying to stretch it to a triple.

“We always talk about trying to bounce back when the other team scores first,” Liberatore said. “So it was pretty big to next inning get that run back. That kind of set the tone for the rest of the game.”

Simmons clubbed up a triple two innings later, his long fly to the fence in left scoring Nelson, who’d singled. Simmons was booking around the bases, and he forced an overthrow at third that allowed him to score the fifth run.

Marx was done after three innings, allowed five hits and two earned runs. Jonah Horwitz allowed runs in both of his innings of relief before Danny Armstrong tossed a clean sixth.

Wootten wouldn’t need all that insurance. A pitcher who works so quickly seems to create a feed-forward mechanism. Wootten keeps the defense on its toes, so they’re more likely to make the plays. Quick innings build momentum to get into the dugout and hit, which leads to runs supporting Wootten, which allows him to pepper the zone and pitch to contact. And on and on.

“In those innings, they put the ball in play, and our defense made the outs, so it made it feel faster,” Wootten said. “Our offense had some big hits, scored some runs for me, so that made it go faster because we wanted to get back in the dugout and hit.”

Ridley 5, Springfield 4 >> The Cougars struck for two quick runs in the top of the first, but the Green Raiders crossed the plate three times in the fifth to take the lead. Mike Happersett shut the door on the mound with 1.1 innings of scoreless relief

Jeremy DeCarlo had a triple and two RBIs, Ryan McNichol added two hits, and Jim Stranix finished with a hit and an RBI for Ridley.

Cody Grande was 4-for-4 with two RBIs for the Cougars, whose seven-game winning streak ended.

Alex Pak was 2-for-4 with a home run and three RBIs. Mike Valente had three hits, including a double, and a pair of ribbies. Zane Malarkey added two hits, three runs scored and two RBIs. Valente pitched five innings with four Ks to earn the win.

Max Franzini was 3-for-3 with a pair of runs scored for the Royals.

Kevin Henrich (four runs) and Jaxon Kehoe (two runs) each went 3-for-4. Despite allowing five runs, five hits and five walks, Anderson struck out six over 3.2 innings to get the win.