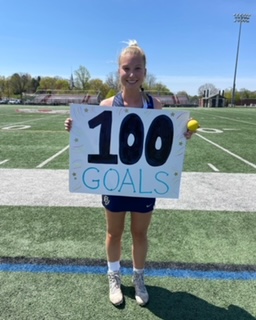 Highlights: Alyssa Mozi’s milestone outing was the highlight of the Rams’ non-league game with the Bulldogs Saturday.

Mozi got the 100th goal of her scholastic career as part of a game-high six goals she netted alongside an assist. Alexa Kairis and Kayla Wilkes each had five goals and Mia Riccitelli had two for the Bulldogs in their non-league victory over the Rams.

Highlights: Avon Grove outscored the Phantoms 8-0 in the second half to walk away with Saturday’s non-league win.

Highlights: Gracyn Smith led the way for the Wildcats as they celebrated Senior Night with a decisive victory over the Vikings.

Highlights: Dane Hagen provided the offensive sparsk the Vikings needed to edge out the Hornets in Saturday’s non-league game.

Hagen had four goals and three assists for PV, with Jack Cooper and Ethan Schauer each adding two. Gino Nave had a career-high six caused turnovers, and senior goalie Caleb Woolsey had 9 saves in the day.

Highlights: Outscored 6-4 in the second half, the Rams saw their early lead overturned by the Trojans Saturday.

Chris Marchini netted a hat trick to head Spring-Ford, which held a 3-2 advantage at the half. The Rams were also edged by Parkland in shots on goal (25-24) and ground balls (21-20).

Highlights: Dom Gerasimowicz doubled twice and drove in a pair of runs to highlight the Falcons’ non-league loss Saturday. Yasir Gardner-Sizer also doubled as part of a two-hit day.

Highlights: the Blazers scored 4 runs in the 5th inning with two outs and added 4 more runs in the 6 to pull out an 8-2 victory over Wyomissing.

Cam Hirshman lead the Blazers with two hits, an RBI and a stolen base. Mason Walter drove in three runs to back up winning pitcher Eli Rhoads, who went six innings allowing five hits and two runs while walking none and striking out three.