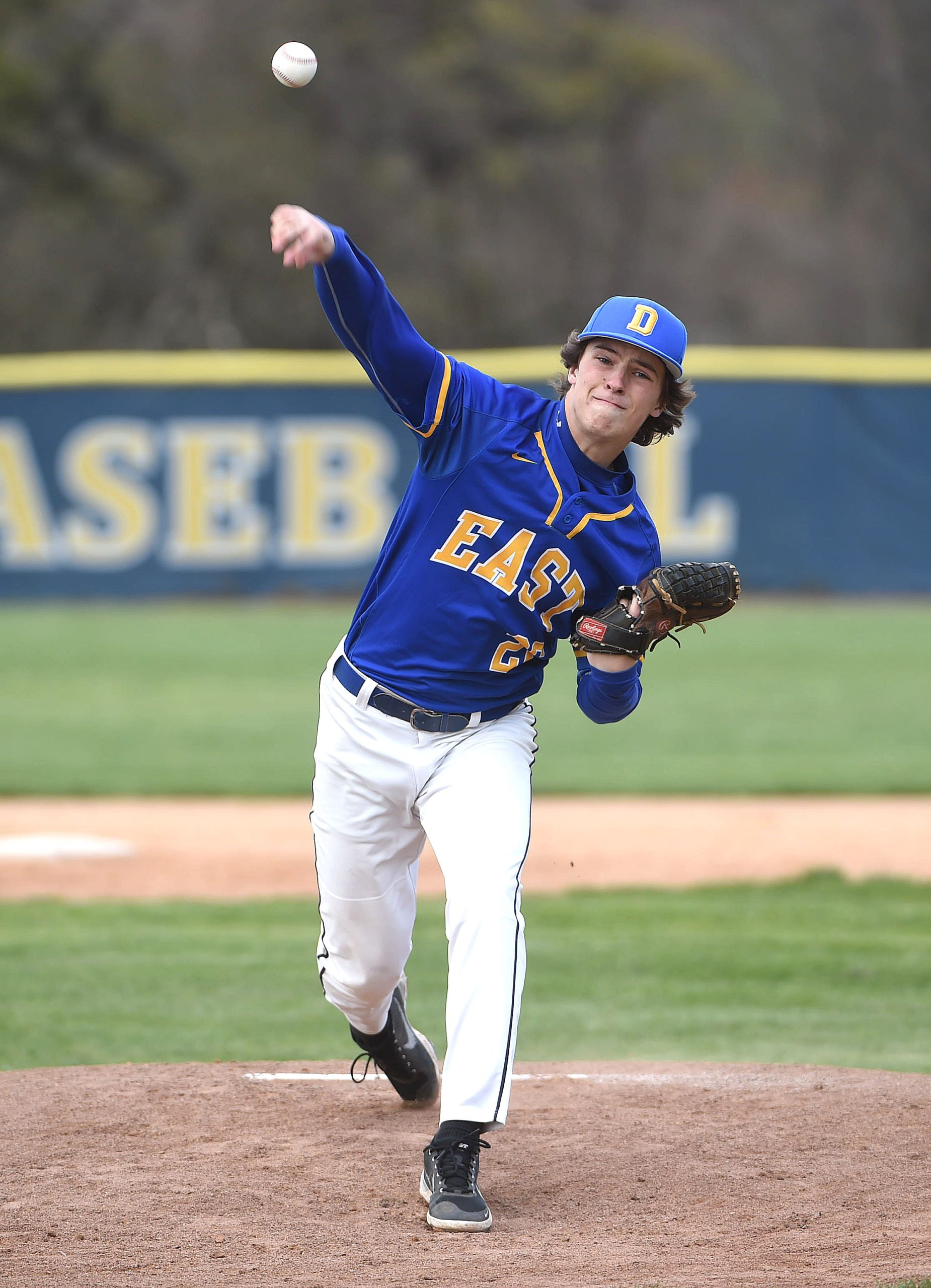 EAST MARLBOROUGH >> The Downingtown East baseball team bounced back from a tough loss to West Chester East on Monday to beat back Unionville on Wednesday afternoon at a cold and blustery Longhorn Stadium. The Cougars got a strong starting pitching performance from senior Luc Rising and held off a seventh-inning rally to take a hard-fought 8-6 Ches-Mont League victory.

Rising went 5 2/3 innings, allowing the Longhorns (1-10 Ches-Mont, 1-10 overall) just four hits while striking out eight. Nate Kabatt came in for Rising in the bottom of the sixth inning to get the save for the Cougars (7-3 Ches-Mont, 8-3 overall).

“My guys got that early lead for me. It is really a lot easier to pitch with a lead,” Rising said. “You get to relax and a little and a mistake is easier to take. Today, my fastball and curve were working well and I thought my change up was really good and that is what I was using for my strikeout pitch today.”

Downingtown East took an early 4-0 lead after two innings as they scored four runs on just two hits against starter Braden Pomponi. James Lambe started the second with an infield single. After Nick Mullen flied out, Jake Schultz was awarded first base on a catchers interference call. Kyle Marinola then singled to load the bases.

Jamey Jenkins brought in the first with a grounder to first. Pomponi then walked two straight batters to bring in two runs. A wild pitch plated the fourth run and it looked like the Cougars were on the way to an easy win.

They piled on two more runs in the top of the fourth to make it a 6-0 game, and knocking Pomponi from the contest.

Unionville started the fight back in the fourth. After Rising got the first two batters out, the Longhorns put together three straight hits and a walk to plate three runs. The big hit was a ringing two-run double by Ben Baccelierri to right field and the lead was cut to 6-3.

“Things were going along pretty smoothly and the guys were making all the plays behind me. Then it got a little messy in the fourth inning.” Rising said.

It stayed 6-3 until the seventh. Marinola led off the inning with a single. Pinch hitter Ryan Grissom laid down a bunt that was fielded by reliever Jake Ahfeld, but his throw to first went into right field to put men on first and second.

“One of our sophomores in the dugout were asking why we were bunting up 6-3,” Downingtown East coach Pete Susi said. “But in high school baseball you try to put the ball in play and force the other teams to make a play.”

Andrew Dewese then bunted the runners over to second and third with one out. Alex Lehman lofted a sacrifice fly to right to make it 7-3. Their final run scored on an infield error and the Cougars had what looked like a comfortable 8-3 lead.

But, the Longhorns kept battling. Unionville scored three runs on only one hit. East helped out by committing a costly infield error to allow a run to score and an outfield error. Kabatt also walked a batter to start the inning, who would come around to score.
With the tying runs on, Kabatt ended the crazy affair by striking out Sean Regenye to give the Cougars the win.

“We got a good start from Luc,” Susi said. “He has been strong for us all season. His breaking stuff was really working wel. He pounds the strike zone. Those two runs we got in the top of the seventh inning were huge for us.”

It was another tough loss in a difficult season for the Longhorns and coach Chris Valis.

“The kids get fighting just like they have all season,” Valis said. “But, a couple of mistakes hurt us. A catcher’s interference and a couple of errors and that was it.”