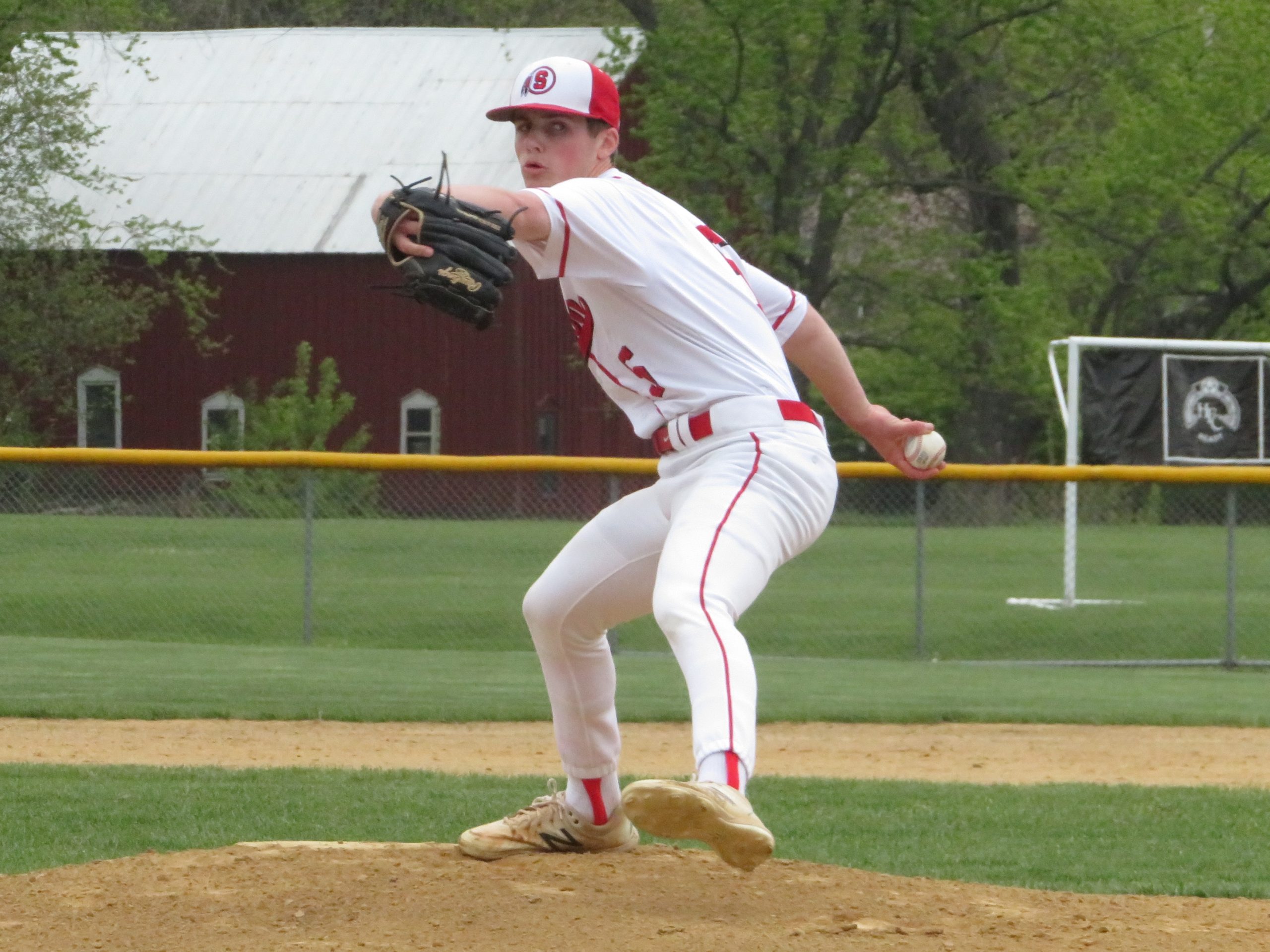 Souderton's Will McCausland pitches during a game against Neshaminy on Tuesday, April 26, 2022. (Ed Morlock/MediaNews Group)

LOWER SALFORD >> Joey Crecca had a plan when he stepped to the plate with two outs and the winning run in scoring position in the bottom of the 11th inning.

That’s what he did.

His groundball to second took a hop and got through Neshaminy’s second baseman, scoring Ethan Warner from second and giving the Indians a 2-1 Suburban One League crossover win at the Harleysville Baseball Complex Tuesday afternoon.

Warner got hit by a pitch to lead off the bottom of the 11th and advanced to second on a sacrifice bunt by Justin DiCesare. After a strikeout, Crecca stepped to the plate and hit a ball to second that found it’s way into the outfield.

“We always say, ‘Put the ball in play,'” Souderton coach Mike Childs said. “Just put the ball in play and see if they make mistakes. With a game like that, it’s long and focus sometimes falls away from them. Both teams are hyped and it’s a long game, working on three hours. Put the ball in play and in this case it went our way and we scored the run. It happens. I’ve been on the other side of it, too, but today it went in our favor.”

As the 2-1 score after 11 innings suggests, both teams had dominant pitching performances.

Will McCausland started for Souderton and went 7 2/3 innings before reaching his pitch count. The senior right-hander struck out 13 batters to three walks and allowed one unearned run on one hit.

“I just felt pretty good,” McCausland said. “The ball felt like it was coming out of my hand good. I had great guys behind me. I’m never worried when the ball’s put in play. I’ve got a solid defense.

“I had my fastball really working for me and then later in the game I started mixing in some more off-speed when they started to get on, but I felt pretty good.”

The Indians lost the lead and McCausland lost his no-hitter and shutout with two outs in the bottom of the seventh inning. Neshaminy’s Joel Bonner stepped in as a pinch hitter and singled to left centerfield. Luke Hardnock, who reached on an error, was trying for third and the throw went out of play. Hardnock was sent home to tie the game and Bonner went to third. McCausland, who threw a JV no-hitter against Neshaminy as a freshman, struck out the next batter to end the threat.

“He did his job without a doubt,” Childs said. “It’s a shame he didn’t get the win. Pitching like he was and as dominant as he was, I think he struck out eight of the first nine batters, I haven’t seen that kind of dominance in a long time.” Souderton pitcher Will McCausland gets the sign from his catcher during a game against Neshaminy. (Ed Morlock/MediaNews Group)

McCausland allowed four base-runners before losing his no-hitter. He walked batters in the second and sixth innings while Neshaminy’s Anthony Trommer bunted and got on when the throw to first was off-target in the fourth. Hardnock got to first base in the seventh when he grounded to shortstop and the throw took the first baseman off the bag.

Jackson Morrissette came on in relief with two outs in the seventh inning. He threw 3 1/3  scoreless innings, striking out five batters to two walks while allowing one hit.

“Jackson – it doesn’t matter what his role is,” Childs said. “Whether he’s coming on in relief or starting, he’s been effective all year. A couple ups and downs because it’s his first varsity season, but I’m very, very impressed with what Jackson’s done for us so far.”

Evan Krippel made his first varsity start for Neshaminy and allowed one run in seven innings. He struck out six batters to two walks and allowed three hits.

Ryan Fox took the loss, allowing one run on two hits in 3 2/3 innings. He struck out four batters to three walks.

“I brought two sophomores into the game today and it’s pretty exciting for the future watching those guys who are probably going to anchor our crew for the next three years including this year,” Neshaminy coach Dan Toner said. “It’s real good to get them the experience and they’ve been getting in a whole bunch.” Souderton nearly won the game in the bottom of the 10th inning. With two outs and a runner on first, Carter Jagiela hit a deep fly ball to left field. Neshaminy’s Jake Kozlowski tracked the ball, found the fence, jumped and caught the ball to rob Jagiela of a walkoff home run.

The Indians took a 1-0 lead in the bottom of the first inning. Shanley Wall led off with a single and advanced to second on a Chris McKenna walk. He moved to third on a fly out to right field and scored on Jagiela’s sacrifice fly to left.

Wall went 3-for-5 Tuesday after going 3-for-4 in a 9-8 win over Central Bucks South Monday.

“(Wall) can’t wait to step to the plate,” Childs said. “It doesn’t matter who’s out there. He wants all pressure situations. He comes up, gets on base and we just have to work on executing when he does get on. If everyone has the attitude of Shanley – that’s what I talked to them in the huddle about – as far as how aggressive he is at the plate and knows nothing phases him. If we get that as a team, all 21 guys, we’re going to be tough.” Souderton’s Shanley Wall kneels on third base after advancing on a wild pitch against Neshaminy. (Ed Morlock/MediaNews Group)

Neshaminy, the 2019 and 2021 District 1-6A champs, are currently on the outside looking in of the 24-team playoff field, but Toner’s confident they will get things right.

“We’re young and still figuring some things out,” he said. “A lot of games we lost earlier was just us kicking the ball around a little bit or making an immature play. What I’m seeing so far is pretty good and I can fully see us making a nice run at the end. Just need everything to start coming together.

“Our goal is always just get in. We won it as an 11 seed, we won it as a seven seed. As long as we get in there, that’s what we’ll be fighting for the rest of the way moving forward.”