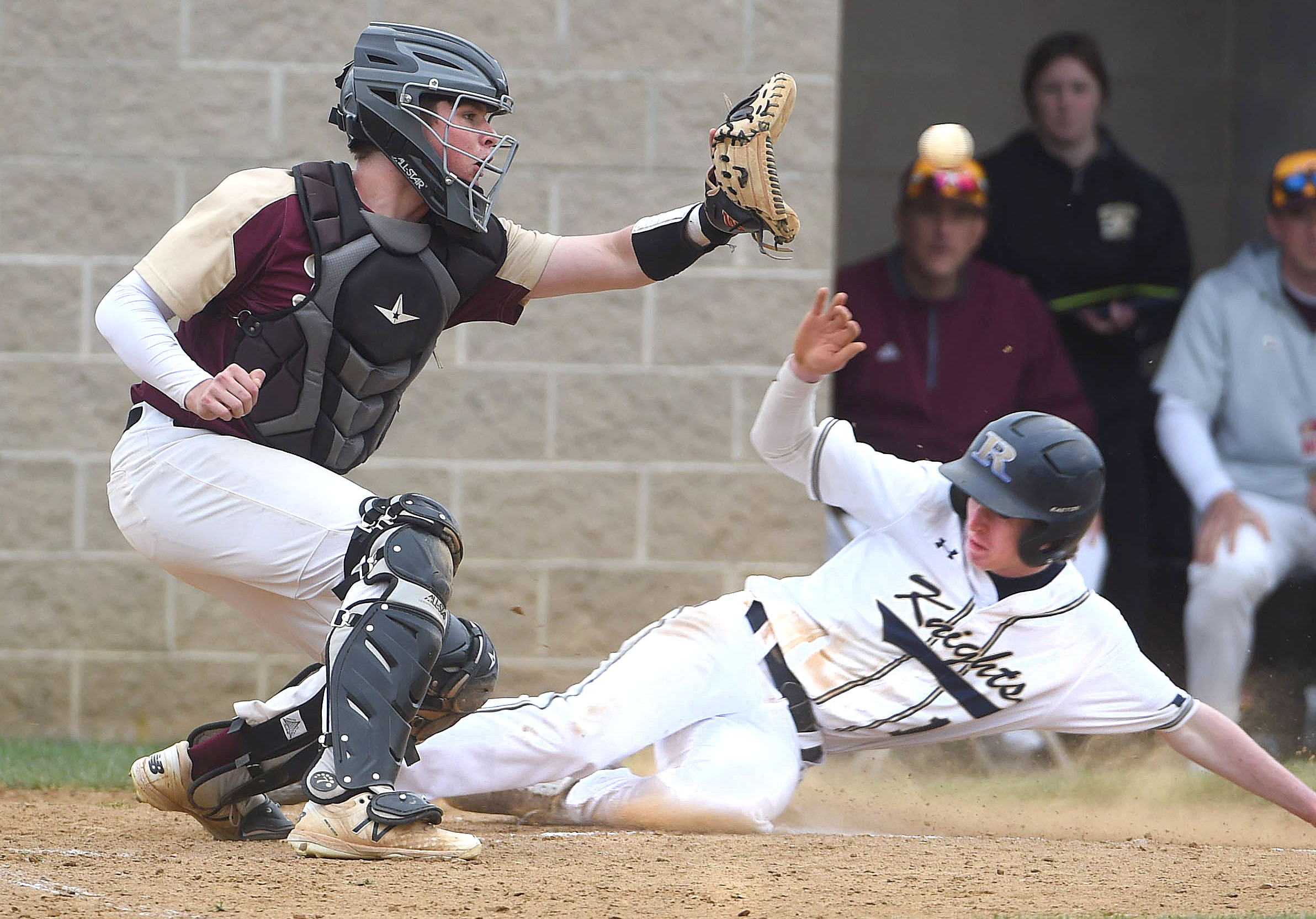 WESTTOWN >> After an uncharacteristically poor season last year, the West Chester Rustin baseball squad is making its mark in the Ches-Mont League American Division in the early going. Tuesday afternoon, the host Golden Knights used a suicide squeeze in the bottom of the eight inning to cap a comeback and defeat Avon Grove, 6-5.

Rustin got a solid five-inning starting pitching performance from Kyle Kearns and a stellar relief outing from junior Nick Covis to hold off the Red Devils (1-3). Covis came in to replace Nate Wooters in the sixth inning and held Avon Grove scoreless as the cagy hurler picked up the win.

“This was my first time pitching in relief, although I warmed up a few times,” Covis said. “I just try to come in and throw strikes and keep the ball down in the zone. When we got the double play in the top of the eighth inning, it gave the team a lot of energy for the bottom of the eighth.”

Avon Grove took an early 2-0 lead in the bottom of the first when Rob Weer took Kearns deep over the left-field fence. But, Rustin came back on a solo home run from Aiden Devlin and a solo bomb from Carter Piercey to tie the game at 2-2 after three innings.

Rustin took a 5-3 lead in the fifth when two big errors opened the door for the Golden Knights. They scored twice without the benefit of a hit. They took the lead into the sixth and coach Brad Harkins went to his bullpen in relief of Kearns.

“Kyle is a very composed pitcher and he kept us in the game today,” Harkins said. “He is very efficient with his pitches and we are looking forward to a good year for him.”

Avon Grove did not go away easily, however. They came right back in the sixth when Wooters walked two runners home after an Owen Yoder single loaded the bases and the Red Devils ended up scoring two runs on just one hit and it was a 5-5 game.

The teams both went scoreless in the seventh inning. Avon Grove came up in the top the eighth with chance to break the deadlock. With one out, Caleb Strohecker singled to left field. Up stepped Trevor Dosenbach, who homered earlier, lined a shot to third base. Devlin fielded the ball smartly and started a 5-4-3 double play to end the inning and send the Golden Knights charging off the field.

“Nick Covis is a kid who is a strike thrower,” Harkins said. “And he keeps the ball down and he did that for us today and we were able to roll up the double play. Nick did a real good job today for us.”

With the momentum on their side, the Golden Knights mounted a threat in their half of eighth. Drew Brown led off by drawing a walk. Devlin then laid down a perfect sacrifice bunt that turned into a man on first and third after a throwing error —  the fifth of the game for the Red Devils. With Wooters at the plate, pinch runner Brendan Duffy sprinted to the plate as Wooters laid down a bunt. Duffy slid for home and was ruled safe and the Golden Knights bench exploded in joy with the with to improve to 3-1 on the season.

“This is a really good group of kids that work very hard and are not afraid of putting in the work,” Harkins said. “They show up everyday looking to put in the work and get better and I was real proud of their effort today.”