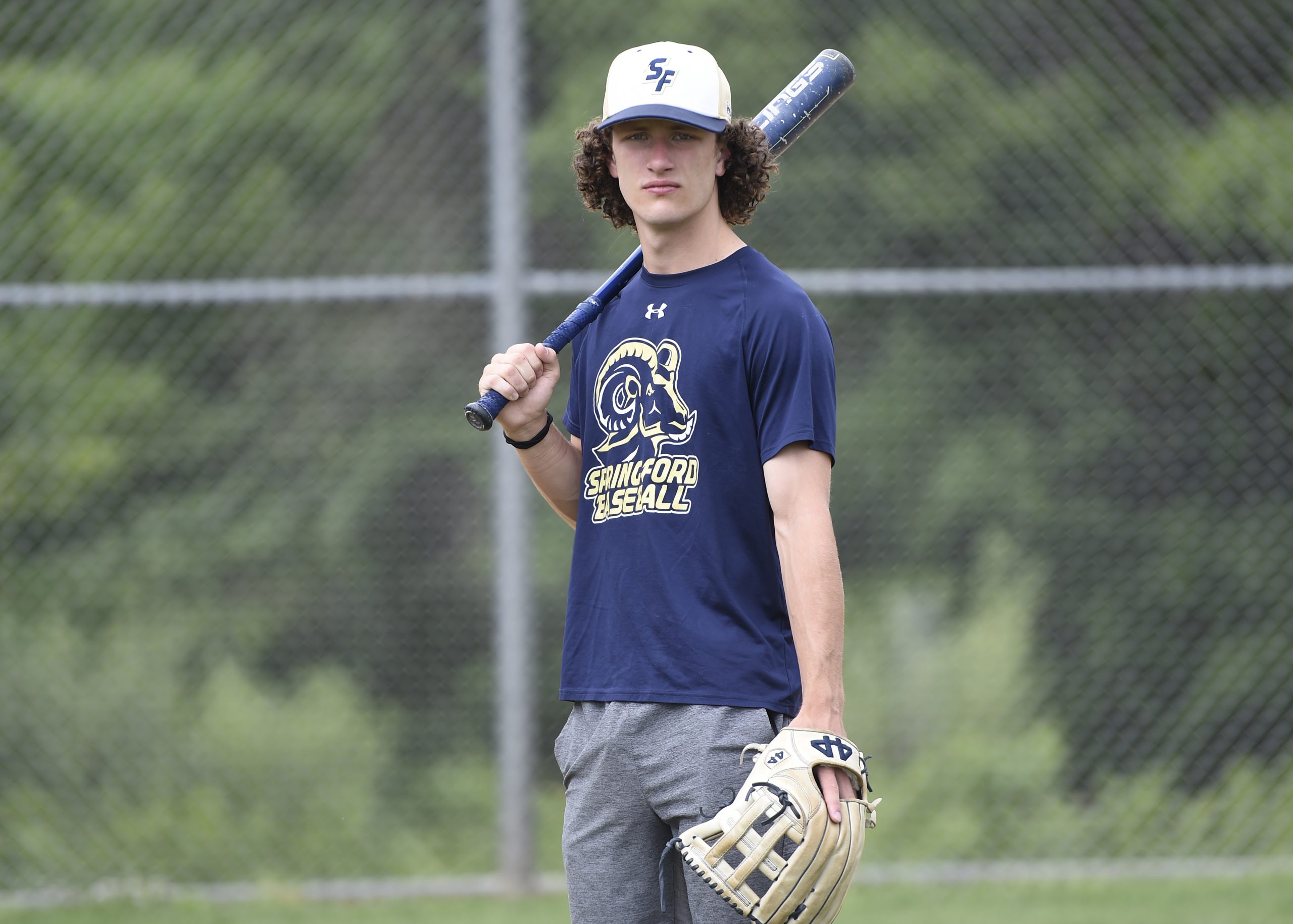 Jack Kisela’s outlook was different from many of the area’s other top baseball players entering this spring.

The Spring-Ford senior knew the 2021 baseball season would mark the last of his career.

Having decided to attend the University of Pittsburgh and play club ice hockey for the Panthers in the days leading up to the season, Kisela had one final chance to leave it all out on the diamond.

He did just that.

Both on the mound and in the batter’s box, the Spring-Ford senior guided the Rams to a dominant season that ended just one game short of the PIAA championship game.

Though others will add on to their resumés beyond this season, there was no question in 2021 Kisela was the area’s best, earning him the 2021 Mercury All-Area Player of the Year.

“It was a lot of emotions mixed in there,” Kisela said. “At some points, it was the best time of my life, no complaints. It was a little frustrating at other points, every team has their ups and downs. But in the end it was a once-in-a-lifetime experience that will never be replaced.”

Kisela batted .484 with nine doubles, five triples, a home run and 23 runs batted in. He also toted an on-base percentage over .600 and swiped nine bags in 10 tries.

His two-way efforts helped the Rams post a 15-1 Pioneer Athletic Conference record, including a 10-0 record in the Liberty division, on the way to league title.

They earned the No. 1 seed in the district and advanced to the District 1 Class 6A quarterfinals before winning two straight games in the playback bracket to qualify for the PIAA playoffs, where they extended their season all the way to the state semifinals.

“In this day and age of baseball where everyone is committing early and showcasing and it’s almost like, ‘Who’s getting looked at and who’s going where?” he just played the game,” Spring-Ford coach Rick Harrison said. “He just played the game and he played it the right way. He wasn’t a big-time college commit, which I think I certainly think he could have been if he wanted to.”

“I feel bad for Jack because I feel he would have had two very special seasons (if not for COVID), but for him to just roll that over into this year and looking back going to the state semis and winning the PAC, the amount of runs scored and the amount of runs we gave up and him being a big key in that, that’s pretty impressive.”

Even while he excelled on the ice — he captained Spring-Ford’s ice hockey team to a league title this past season — there was a time Kisela pictured himself playing baseball at the next level.

He’s been one of the standouts in Spring-Ford’s Class of 2021 since the group started playing together in elementary school.

A missed junior campaign cancelled by COVID certainly impacted his recruitment and other callings made him decide this season would be his last.

“Going into my high school baseball career, I had fully intended on playing in college,” Kisela said. “I had been told by other coaches that I would be able to if I just kept working, and I did. I worked, worked and some things just didn’t pan out.

“I don’t want to say I fell out love with it because I didn’t. I still love the game like nothing else, but playing in college was just something that didn’t interest me anymore, and I just had to step up and make a decision for myself.”

Kisela made sure nothing was left in the tank by the end of the season, giving the Rams everything he had.

Harrison figured Kisela, a lefthanded-hitting outfielder, would be one of his team’s top bats as a junior before COVID-19 wiped away the 2020 season after only a handful of scrimmages.

This year, Harrison anticipated Kisela would provide some innings on the mound, but he didn’t have the righthander penciled in at the top of the rotation before this spring.

That changed after his first varsity start under the lights at Boyertown, beginning his career with five no-hit innings before exiting a third of an inning later and picking up the win.

Kisela finished the league season with a 1.93 ERA in five starts, striking out 42 batters and walking seven. He went at least five innings and didn’t allow more than three runs in all of those starts. The highlight was a complete game shutout against Methacton when he struck out 10.

“I was always a pretty decent hitter, and honestly, my pitching has never really blossomed until this year,” Kisela said. “We didn’t have very many arms this year, so I knew I was going to have to throw. I was doing a lot more pitching preseason than hitting, and I felt good. I felt good on the mound. I always felt good on the mound in prior years, but this year was something else because I had really good coaching behind me as well. It wasn’t just going out and throwing a baseball. It was being a pitcher.”

He pounded the zone with an above average fastball he spotted around the zone and mixed in a breaking ball for a strike that kept hitters off balance.

With injuries to seniors Jack Price and Michael Cunningham, he was the Rams’ No. 1 starter on their postseason run.

“He was pretty lights out,” Harrison said. “He’s got the velocity and he just has a great pitcher’s mentality. He doesn’t get rattled. I thought he located pretty well for the most part. He wasn’t afraid to pitch inside. … He’s like a throwback. He just followed our program in the offseason and just got out there and pitched and played, which is kind of rare anymore.”

Even in a loaded Rams’ lineup, Kisela distinguished himself with the bat as well. He led the Rams’ starters in batting average and often came up clutch in RBI situations.

He said his successful approach at the plate came under the tutelage of former Spring-Ford junior varsity coach and current Pope John Paul II head coach Charles DeLuzio. The goal every time he stepped into the batter’s box was to attack.

“Having that mindset, just being aggressive, is so lethal for a hitter.”

With guys like Aydan McNelly and Jake Books getting on in front of him, and another top bat Dylan Ducharme often following him in the order, there was often plenty for Kisela to attack.

“I remember halfway through the season looking at the stats and the numbers and going, ‘This is pretty special,’” Harrison said. “It’s hard to sustain that when you play 20 games in high school and we played 27. When you look back at the arms we saw, the amount of Division I arms, it was impressive that he was able to put those numbers up against the quality of pitching that we had to see, especially in the postseason and even in the PAC.”

Kisela wasn’t sure how to feel as he departed the field for one last time following the Rams’ season-ending 3-1 loss to North Allegheny in the PIAA Class 6A semifinal.

It was his last time for at least a long time he will be out on the baseball field as he is coaching at a hockey camp this summer in Cincinnati before heading to the University Pittsburgh.

Before heading out, he made sure to spend some time with his Rams teammates and reflect on a truly special send-off.

“When we got the last out at states, I was on first base and I was kind of standing there,” Kisela said. “I didn’t feel upset, but I think the disappointment set in a few days later. I just all the sudden couldn’t stop thinking about it and me and a couple of the other guys would get together and we would talk about it obviously. It just brings up all the memories like, ‘Man, that’s awesome.’ It’s something you’ll never forget.”