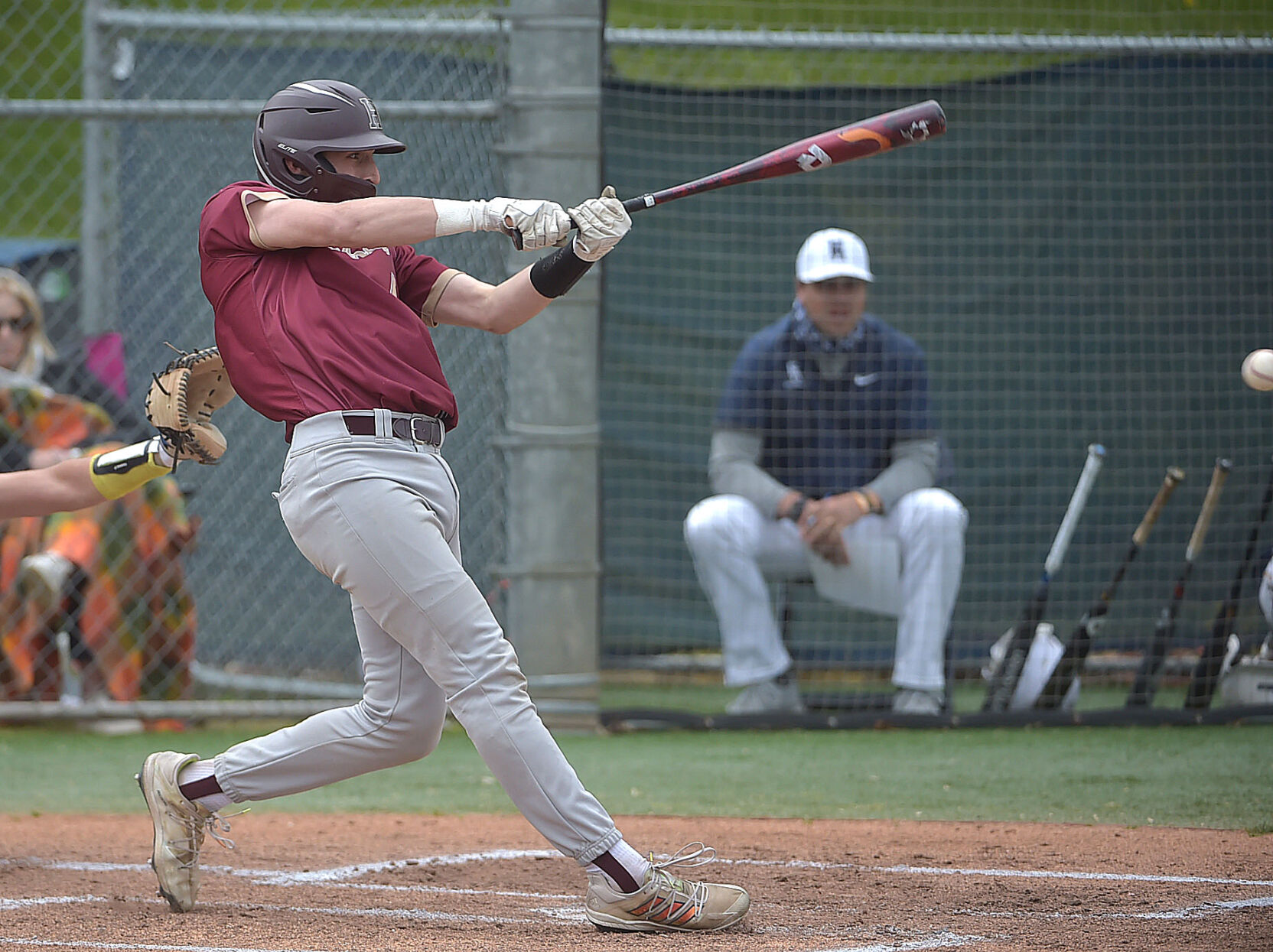 In addition to Strath Haven’s Koll Peichel, the 2021 Daily Times Player of the Year, the All-Delco baseball team includes:

Kyle Lazer, Bonner-Prendergast: The senior was the ace of a Friars team that advanced to the state semifinal round (PIAA Class 4A) for the first time in program history. In 34 innings pitched, Lazer had a 2.06 ERA with 47 strikeouts and only 24 hits allowed. An injury late in the season robbed Lazer of participating in the Friars’ two state tournament victories, but he made a gutsy appearance late in B-P’s loss in the semifinals. Lazer also had an amazing run as starting quarterback for the Friars football team. He will continue his baseball career at West Chester University.

Bonner-Prendergast shortstop Kevin McGonigle, right, catches Wyomissing’s Luke Terefenko off the base in the fourth inning Monday. McGonigle started a big double play in the seventh inning that propelled the Friars to a 9-7 victory over Holy Ghost Prep Thursday. (Pete Bannan/MediaNews Group)

Ryan Reed, Haverford School: The junior was the Fords’ workhorse and ace. A University of Pittsburgh recruit, Reed was an All-Inter-Ac League selection. He was superb in starts against Malvern Prep and respective PIAA district champions Bonner-Prendergast and Holy Ghost Prep. Reed started opposite every team’s best arm and stymied some of the best-hitting lineups in the area. The 6-foot-5 southpaw posted five wins, a 1.68 ERA and 63 strikeouts in 45.2 innings.

Kevin McGonigle, Bonner-Prendergast: The sophomore shortstop was highly touted before he played an inning of high school ball for the Friars. Last summer, in the midst of a pandemic that canceled his freshman season, the Aldan native made his verbal commitment to SEC power Auburn. All McGonigle did in 2021, his rookie season, was earn Catholic League Offensive Player of the Year honors. He batted .519 with seven home runs, five doubles, two triples, 23 RBIs and 28 runs scored. McGonigle’s all-around excellence helped the Friars to a 15-win season and a run to the PIAA Class 4A semifinals.

Josh Hankins, Chichester: The senior shortstop was the leading man for the Del Val League champs. The future Coppin State University Eagle crushed the opposition to the tune of a .627 batting average. Chichester coach Dan Singley called Hankins the best shortstop the program has seen since the 1980s. “His leadership, drive and determination … will carry him as far as he chooses to go as a student-athlete, person and whatever he chooses to do in life. Josh is an amazing young man who left his legacy here at Chi that will be talked about for years to come.” In 17 games, Hankins managed 32 hits, 30 runs, 10 walks, five homers, eight doubles and three triples. Hankins also scored more than 1,000 career points for the Eagles basketball team.

Josh Dell’Arciprete, Delco Christian: The junior infielder/pitcher shattered school records and was a critical piece to the Knights’ run to the District 1 Class A championship. Dell’Arciprete’s .560 batting average is the new high-water mark at Delco Christian, besting the records previously held by 2008 All-Delco Mike Connelly and Brett Hontz, who was 2004 Daily Times Player of the Year. The slugging Dell’Arciprete registered a 1.552 OPS with nine doubles, two triples and a homer. He also stole 18 bases and threw a no-hitter in a game the Knights lost, 2-1. Said coach Jeff Wisnewski: “He had consistently good at bats the whole year.”

Will Higson, Haverford: The senior third baseman was the captain of a Fords team that caught fire late in the season. He batted .368 with 16 RBIs and seven extra-base hits in 17 games. Higson earned All-Central League honors and a slew of other recognitions, including the Haverford High Norman Wiggins Award for best male athlete. Higson was recently named Male Athlete of the Year by the Delco Athletes Hall of Fame. As a junior he was an All-Delco football player for his excellence at the linebacker position. He will play football at Franklin & Marshall.

Jonny Flieder, Haverford School: The senior shortstop was an excellent leadoff hitter for a Fords lineup loaded with run producers. An All-Inter-Ac League second-team selection, Flieder set the tone offensively for an 18-win Fords crew, batting .370 with 34 hits, including six doubles and three home runs. He scored 34 runs and collected 18 RBIs. Flieder will play baseball next spring at Haverford College.

Owen Mathes, Marple Newtown: The junior flourished on the mound and in the infield for the Tigers. Mathes was the team’s No. 1 hurler, posting six wins, and earned All-Central League recognition as an infielder. Mathes delivered at the plate, too, hitting .405 with 31 hits, 21 RBIs and 19 runs scored. Mathes tossed a complete game with four strikeouts in MN’s 2-1 victory over West Chester East for third place in the District 1 Class 5A tournament. Owen is the third Mathes sibling to take home All-Delco honors, joining big brothers Cam and Alden, who was the 2019 Daily Times Player of the Year.

Kellen Davis, left, flourished in the outfield and on the mound for Penncrest. The senior finished with a 1.20 ERA and 69 strikeouts in 44.1 innings and hit .456 with 19 RBIs. (Pete Bannan/MediaNews Group)

Kellen Davis, Penncrest: The senior excelled as the Lions’ centerfielder and No. 1 pitcher. He posted a 4-2 record with a 1.20 ERA and 69 strikeouts in 44.1 innings. At the plate Davis was one of the premier hitters in Delco, finishing with a .456 average and .667 slugging percentage. He collected five doubles, two triples and 19 RBIs. While Penncrest struggled to an 8-13 record, Davis is highly regarded among peers and rival coaches. Said Penncrest coach Rusty Abrams: “Kellen is a complete player. (Has) speed and is an excellent defender in centerfield. He never came off the field.” Davis will continue his playing career at Old Dominion.

Gavin Severa, Ridley: The senior outfielder tortured opposing pitchers with his ability to make contact and run the bases. Severa was the top player on a rebuilding Green Raiders team. He batted .528 with a .585 on-base percentage and 10 stolen bases. Severa finished with 28 hits, including four doubles and five triples, 23 runs scored and 11 RBIs. His outstanding season resulted in All-Central League recognition.

Zach Tropiano, Springfield: The junior centerfielder was a terror at the plate. Tropiano set a school record for most hits in a season with 33 en route to a .550 batting average. He worked 12 walks and stole 15 bases on a Cougars team won nine games. Tropiano smacked nine doubles and a triple while scoring 25 runs and driving in 11. He was a unanimous All-Central League selection and is considered one of the top two-way outfielders in the county.

Eric Genther, Haverford School: The senior was the most complete catcher in Delco. He was a unanimous All-Inter-Ac League selection. Genther also was a candidate for Daily Times Player of the Year honors and voted team MVP. The Rhode Island bound catcher hit .521 (.586 league) with 38 hits, including five homers and three doubles. He scored 25 runs and drove in 37. Genther struck out only four times in 104 plate appearances and threw out eight baserunners. Haverford coach Bob Castell said: “Eric was our team leader and excelled offensively and defensively all year,”