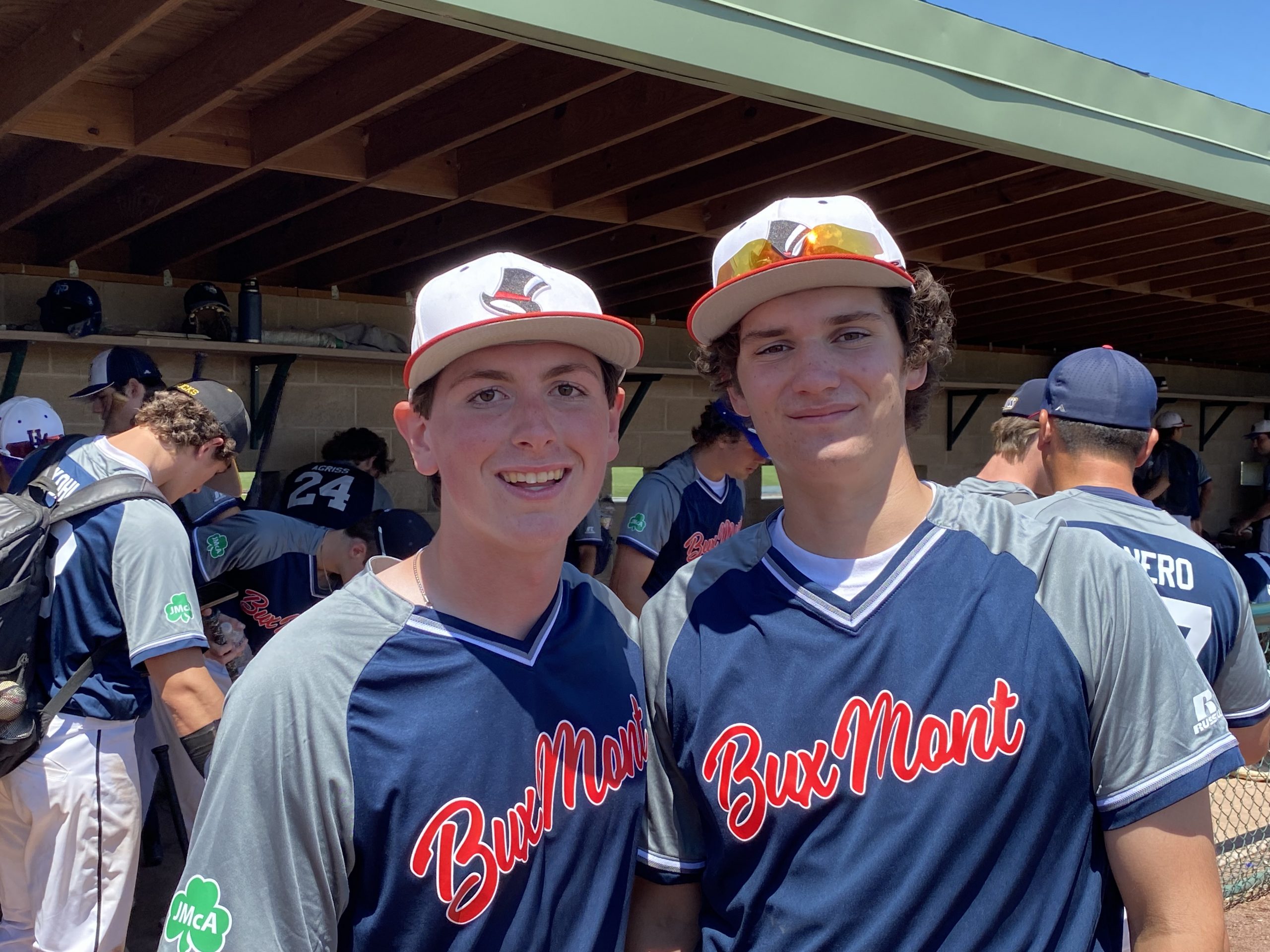 PHILADELPHIA >> Will Bruner was not coming up empty a second time on a chance to turn two in the bottom of the ninth inning.

“I was waiting for it, I knew it was coming, one right to me,” the Hatboro-Horsham junior said. “I was tagging him, getting to first – trying again. It worked out this time.”

With the bases loaded, one out and Bucks-Mont holding just a one-run lead over Chester County, Bruner scooped up the ground ball to the right side, got the tag on the runner heading to second then threw to first to complete the double play and seal Bucks-Mont’s 5-4 victory in the Carpenter Cup first round Wednesday morning at FDR Park.

“That is the crazy part about the game,” Bucks-Mont head coach Chris Manero said. “And not only that, it was great that he got the opportunity to do it twice.”

Chester County broke a 2-2 tie in the bottom of the sixth on Kevin Wheeler’s two-out RBI triple but Bucks-Mont answered with three runs in the top of the seventh to take a 5-3 lead.

Gehrig Fleming started the bottom of the ninth reaching on an error while Wheeler followed with a single. Sean Matson’s grounder gave Bruner the opportunity for a double play but Bruner could not apply the tag and Matson was safe at first to load the bases with no outs.

After Tristan Cairnes struck out the next batter, Owen Rector singled through the left side to score Fleming, pulling Chester to within a 5-4. The next batter hit another grounder to Bruner, who got the tag and throw for the 4-3 double play, sending Bucks-Mont to a quarterfinal matchup against Tri-Cape 10:30 a.m. Friday back at FDR Park.

“Just missed him, rushed the throw a little wide, it was a little soft as well – didn’t get him,” said Bruner of his first attempt. “Second time, got him, spun around, threw to first.”

Nick Katherine, Bruner’s fellow HH junior, provided the tying hit in the seventh then later in the frame scored the winning run despite not knowing he was going to play in the game until late Tuesday.

“I actually got a text at like 10 last night to come out,” said Katherine, who was an alternate on the team roster. “So I was like ‘All right, might as well come out.’ Got a big hit in that one inning.”

Katherine knotted the matchup – which was delayed a day due to wet field conditions – 3-3 on a one-out RBI single to right that brought another Hatter, sophomore Trey Porter, who had led off the seventh with a walk.

Bucks-Mont added two more runs on wild pitches – Katherine scoring on the second to put his side up two.

“A few years ago I think it was Nate O’Donnell from North Penn, we called him up like somebody didn’t show up the day of and he ended up having a big series,” Manero said. “Nick, unfortunately we had one of our guys get hurt in a legion game last night, so fortunately he reached out to me right away and then we went on the list and looked for the best fit in that spot.

“So it’s good to get that last-minute call. We always tell these guys at our trial, we always end up needing an alternate somewhere.”

Bucks-Mont used six pitchers with Wissahickon junior Nate DeVincent earning the win after pitching a scoreless seventh. Cairnes, an Upper Dublin junior, picked up the save, giving up a run on two hits and striking out one in the ninth.

Wissahickon junior Ben Junker took the mound in the bottom of the third and threw two scoreless innings, allowing two hits, one walk and struck out two. Plymouth Whitemarsh senior Joe Rauscher struck out two in working a 1-2-3 eighth.

“Everybody just has to do a job,” Junker said. “So it’s my job to go out and throw two innings then I just got to pass the ball off to my teammates and let them do their work.”

Wheeler, a West Chester Henderson junior, was 3-for-4 with a triple and RBI for Chester County while Unionville senior Jack Regenye was 2-for-5 with a run scored.

Chester County took a 2-0 lead in the bottom of the first. Regenye led off by reaching on an error, stole second and went to third on Aaron Kirby’s infield single. After Kirby stole second, Griffin Straface singled to left center to score both runners.

Bucks-Mont made it 2-2 with a pair of two-out runs in the top of the fourth. Owen Petrich started the inning with a double to right center then went to third on a one-out groundout. An infield single up the middle by Justin Butler plated Petrich, cutting the margin to one.

Butler went first-to-third on RJ Agriss’ single to right then scored to tie the contest on Carter Hinds’ RBI single to left.

Chester went back ahead 3-2 in the sixth when a two-out hit Wheeler sent to center got past the center field for a triple to score Ryan Dewees from first.

Porter began the seventh with a walk while two batters later Leo Soriano dropped a one-out single to right to put two on for Katherine, who singled to right to bring home Porter to tie things at three.

“It was a curveball so I just sitting back a little bit,” Katherine said. “Just take it the other way. Just a little outside.”

Soriano, an Upper Dublin sophomore, scored on wild pitch to put Bucks-Mont up 4-3 with Katherine coming in on another wild pitch for a 5-3 advantage.