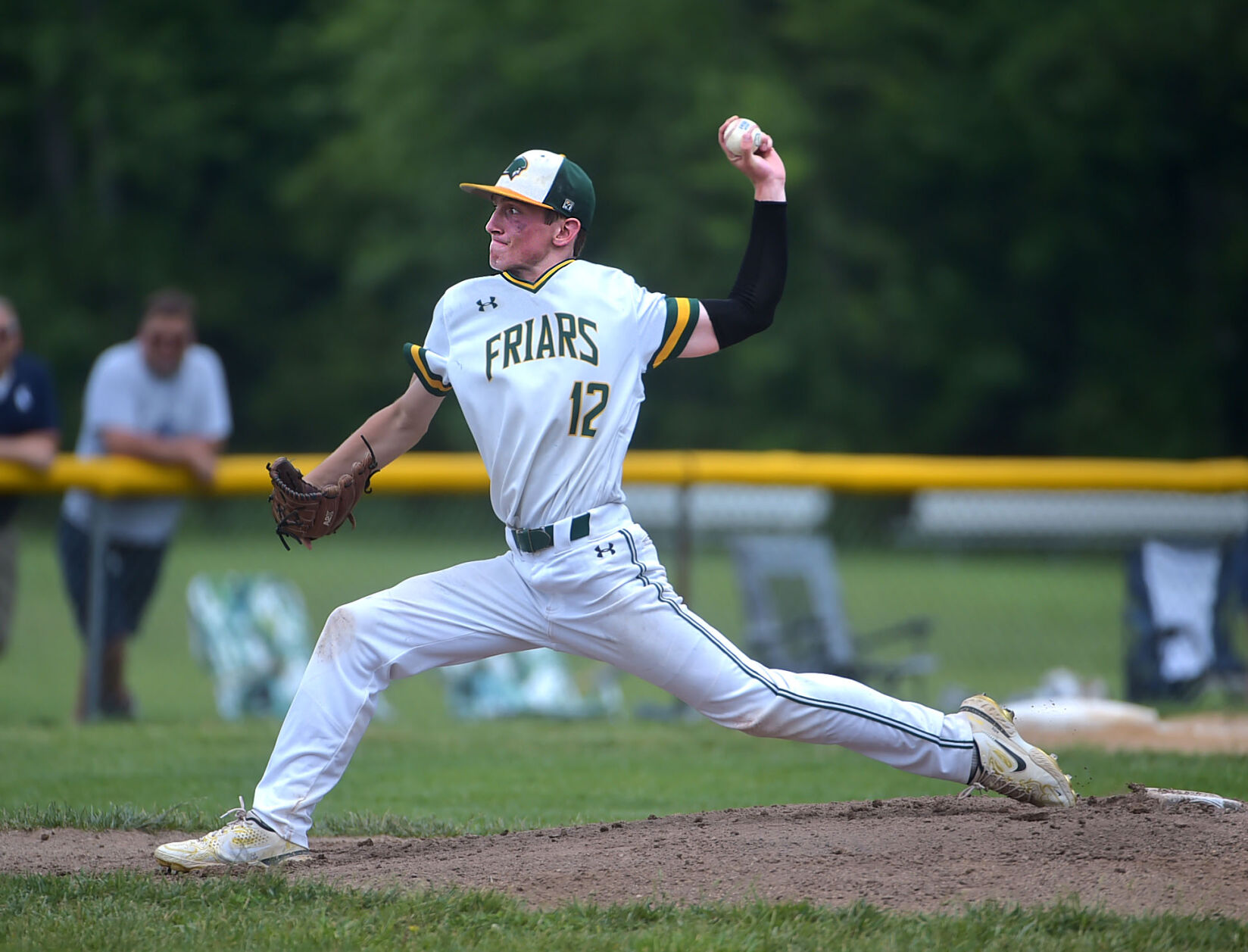 Bonner-Prendergast's Ryan Kearney delivers a pitch during the Friars' PIAA Class 4A opener against Wyomissing last week. Kearney went 6.2 innings Monday and left with the win in sight, but the Friars couldn't seal the deal in the seventh in a 5-4 loss to Wyoming Area. (Pete Bannan/Medianews Group)

UPPER SAUCON TWP. — There was no blueprint for Nathan Novakowski as he stepped into the batter’s box Monday evening.

The Wyoming Area sophomore was pinch-hitting in the eighth spot of the order. Bonner-Prendergast starter Ryan Kearney was rolling, the Friars were leading by three runs, one out from the PIAA Class 4A baseball final, and Novakowski was their last hope. Oh, and the rain was starting to pelt DeSales University’s Wieland Park, just for cinematic effect.

“I thought if he threw me a fastball down the plate, I was going to swing at it,” Novakowski said. “But the first two strikes, in my opinion, were outside. He threw outside the whole at-bat, and the last four pitches weren’t even close.”

Just as Novakowski had no certain path to follow at the dish, there was no readymade script for coach Steve DeBarberie to deliver in the huddle, after Bonner’s hopes of a first PIAA final appearance were snatched, one strike away, one out away, with six spurned chances to record out No. 21.

“You just tell them that you love them,” DeBarberie said. “You trust them, you love them. It’s tough in those moments right there.”

The rally by the District 2 champion was equal parts gritty comeback and epic collapse. It scored four runs in the bottom of the seventh by putting two balls in play – a lineout to third for the second out, and the groundball booted at second base to score two runs and end it. The four runs came on five walks and an error.

The Warriors advance to the state final on the back of five runs on precisely two base hits, both singles.

It started with Novakowski working a seven-pitch walk. That sent Kearney, who was magnificent, past his 105-pitch limit and to the dugout, having struck out eight.

In came Kyle Lazer, who’d missed the last two weeks with a leg injury but who DeBarberie said had looked 100 percent in bullpens. And off came the wheels.

“We had to ride him out in that situation,” DeBarberie said. “He’s our guy. He’s our senior. I don’t think he was missing the zone. I think he was getting squeezed. It’s unfortunate. He gets a ground ball, it takes a bad hop, it turns our second baseman around – and that’s the game.”

Lazer walked the nine man, Jason Wiedl, on five pitches to turn over the order. He walked leadoff man Evan Melberger as the tying run. The rain intensified, the power righty’s grip on the ball loosened, the zone became more elusive. Already highly variable on the day, Lazer couldn’t seem to locate it, after Kearney thought he’d found it for the crucial third strike on Novakowski.

In any event, the bases were loaded, and up stepped Casey Noone, who’d looked terrible in three at-bats against Kearney, the lefty twice striking out looking on Kearney’s array of dazzling breaking stuff.

“I knew they have a fresh arm in there,” Noone said. “I knew he hasn’t really warmed up a ton, so I knew he was going to be a little wild. I was just trying to work that at-bat as long as possible, use as many pitches as he had in him and hopefully get to first base.”

Noone held his ground, waiting for Lazer to come to him. He never did, and his base on balls forced home a run to make it 4-2. Then came three-hitter Jake Kelleher, who’d trudged off dejectedly in the bottom of the sixth after a six-foot ground out in front of the plate. He too was issued a free pass and just like that it was 4-3. Bases loaded. Two outs, and JJ Hood at the plate.

There wasn’t a more motivated person to dig in. Hood, Wyoming’s starting pitcher, needed 40 pitches to escape the first. He allowed the first five Friars he faced to reach, capped by Michael Anderson’s two-run single. Playing catch up the whole way, he barely scraped out five innings, allowing an insurance run in the fifth when Kevin McGonigle tripled and scored on an overthrow from Noone on John DeMucci’s foul out to second. It was part of a three-hit day for McGonigle, who was a homer shy of the cycle and reached base four times. Anderson also doubled among three hits.

Hood had used his bat to unnerve Kearney in the second with a 345-foot foul ball down the line in left that was long gone had it not hooked foul. He’d also golfed one to the track in the fourth. Hood was hit by a pitch in the at-bat with the long foul ball, scoring on Jack Mathis’ bases-loaded walk. That bit of foreshadowing stood as the Warriors’ only run until the seventh.

So up stepped Hood, with Lazer flailing. He started with a strike. Then came a meek two-hopper to second that stayed down on Harry Carr. He booted it, struggled to find it, then looked up to see Noone streaking around third. It was just a moment’s delay, but enough for Noone: The throw home drew DeMucci up the first-base line, too late to deny Noone’s headfirst dive into the state final.

“I was running on contact no matter what, so I had my head down,” Noone said. “I was digging as fast as I could, and I was scoring no matter what.”

“He hits the ball to second, I’m thinking, game’s over. We lose,” Novakowski said of his dugout vantage point. “JJ runs it out, Jake runs it out, we win the game. Crazy feeling. It doesn’t even feel real yet. It’s crazy.”

The shock that Warriors have another game left, against District 7 champion New Castle, hadn’t yet worn off as they boarded the bus.

“It’s unbelievable,” Noone said. “Deep down, we knew we had it in us. But at times it did look like we were out for the count. But we kept fighting.”

That appraisal, of the game’s unbelievability, is one Bonner won’t argue. Even if it sets the mission for an underclassmen-laden side to exceed next year.