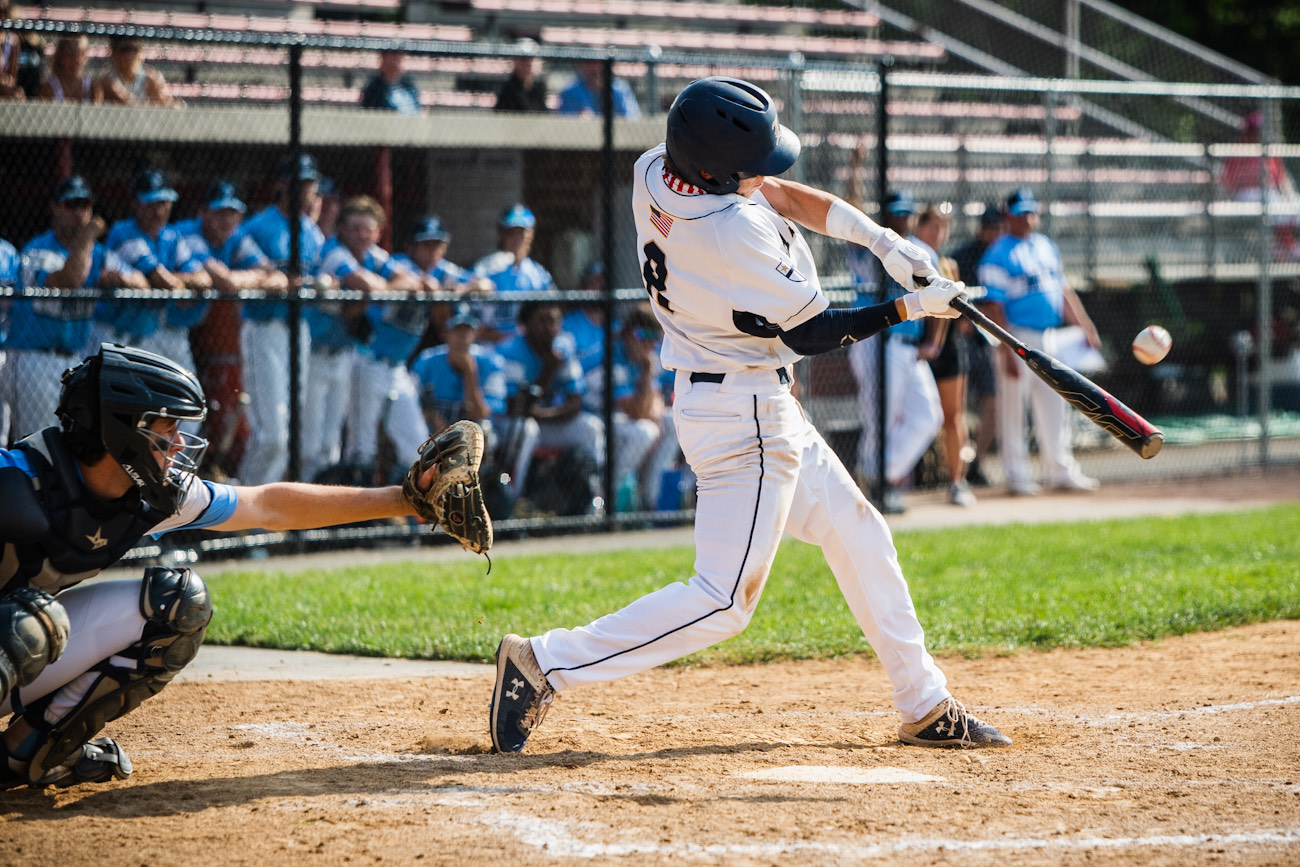 La Salle’s Eric Shandler (8) hits a sacrifice fly for 1-0 lead in the bottom of the fifth against North Penn during their PIAA-6A semifinal on Monday, June 14, 2021. (James Beaver/For MediaNews Group)

BOYERTOWN >> It was quality – and timely – offense rather that quantity that sent the La Salle baseball team to the PIAA Class 6A championship game.

But those two – on consecutive sacrifice flies from Eric Shandler and Mason Sermarini in the bottom of the fifth inning – were two more than Ryan Marler allowed the Knights as La Salle reach the PIAA final for the first time since 2014 with a 2-0 victory at Bear Stadium.

“We just wanted to put barrels on balls and I feel like we did a good job,” Shandler said. “First couple innings they were hanging up for them then in that fifth inning I think it broke open, just put some things together, got some sac flies, that’s all you can really do. Just piece some runs together and that was the difference.”

Since a 3-2 win over Archbishop Wood in the Philadelphia Catholic League final, the Explorers had plated a combined 47 runs in rolling to three victories.

They cruised past Central 12-2 in five frames in the District 12 final then opened states by topping Hatboro-Horsham 14-1 in five. Three days later in the state quarterfinals at Bear Stadium, La Salle erased a 7-2 deficit to Emmaus with a 15-run fifth and bested the District 11 champ Hornets 21-8 in six.

While the two runs against North Penn came up short of those previous totals, Explorers coach Kyle Werman did not see any difference in the team’s at-bats Monday.

“I felt like we were as productive today at the plate with the kinds of the swings we got as we were any other game this year,” Werman said. “I was really pleased with our swings against a good pitcher, I thought they executed our approach and we put ourselves in position to score runs. And sometimes you just don’t break through but we found a way to scratch a couple across. It took stealing a couple bags and being opportunistic to do that.”

North Penn ended up out-hitting La Salle six to five while the Explorers’ Jake Whitlinger had the day’s lone extra-base hit, leading off the bottom of the first with a double to right center.

“We didn’t want to start trying harder – we’ve been doing the right things at the plate,” Sermarini said. “Good things happen, the game rewards you.”

A Shandler sac bunt put Whitlinger on third but he was left stranded there. An inning later, the Explorers loaded the bases with two outs only for a fly out to right to keep things scoreless. Through three frames, La Salle left five runners on bases – four in scoring position.

“Their center fielder (Jeff Sabater) covers a ton of ground, he’s a really good ballplayer, can really run,” Werman said. “You feel the breeze at your back here pushing in. You know, Sermarini’s ball (in the fifth) goes out last week based on the way the field was playing. And today if you hit it in the air in the outfield, it was getting run down. If you hit it on the ground, the infield grass was slowing it down.

“It was just a hard day to put together hits, you had to string together line-drive hits together. We got a handful of those but the days where some of those hard-hit fly balls land for doubles are the ones where you’re scoring six, seven, eight runs and today wasn’t that day.”

After going down in order in the fourth, No. 9 hitter Jephson Hadson-Taylor began the Explorers’ breakthrough bottom of the fifth by hustling for an infield single.

“Starting off the inning like that, we knew good things we’re going to happen,” Sermarini said. “Later in the game, it’s about time we pushed some runs across.”

Hadson-Taylor stole second then went to third as Whitlinger reached on an error. Whitlinger’s steal of second put a pair in scoring position with no outs. Shandler finally broke the 0-0 stalemate on the following at-bat, his sac fly to left center plating Hadson-Taylor and allowing Whitlinger to take third.

“He threw me that curveball on 1-2 and laid off of it and I had a feeling a fastball was coming,” Shandler said. “I tried to put a good swing on it, use the middle of the field and then infield was in so I was trying to put a ball in the air somewhere and I got it deep enough in to score.”

The next at-bat, Sermarini made it a two-run game as his sac fly to center brought home Whitlinger.

“We were feeling good, I was talking to Eric, we were seeing the ball well, we knew good things were going to happen,” Sermarini said. “I thought I crushed that ball but it ended up being caught but we did what we needed to do, we got a couple runs.”

The 2-0 advantage proved enough for Marler, who gave up a leadoff single to Sabater in the top of the sixth but retired the next six to seal the shutout and La Salle’s trip to State College. The Explorers look for the program third PIAA title – having won in 2012 and 2014 – against District 7 champ North Allegheny 4:30 p.m. Friday at Medlar Field at Lubrano Park.

“First credit to Ryan Marler, he pitched an absolute gem,” Sermarini said. “And we knew we were going to get a couple runs on the board, we’ve been swinging it well. Barreling balls hard all game and finally they ended up falling and we did what we had to do.”