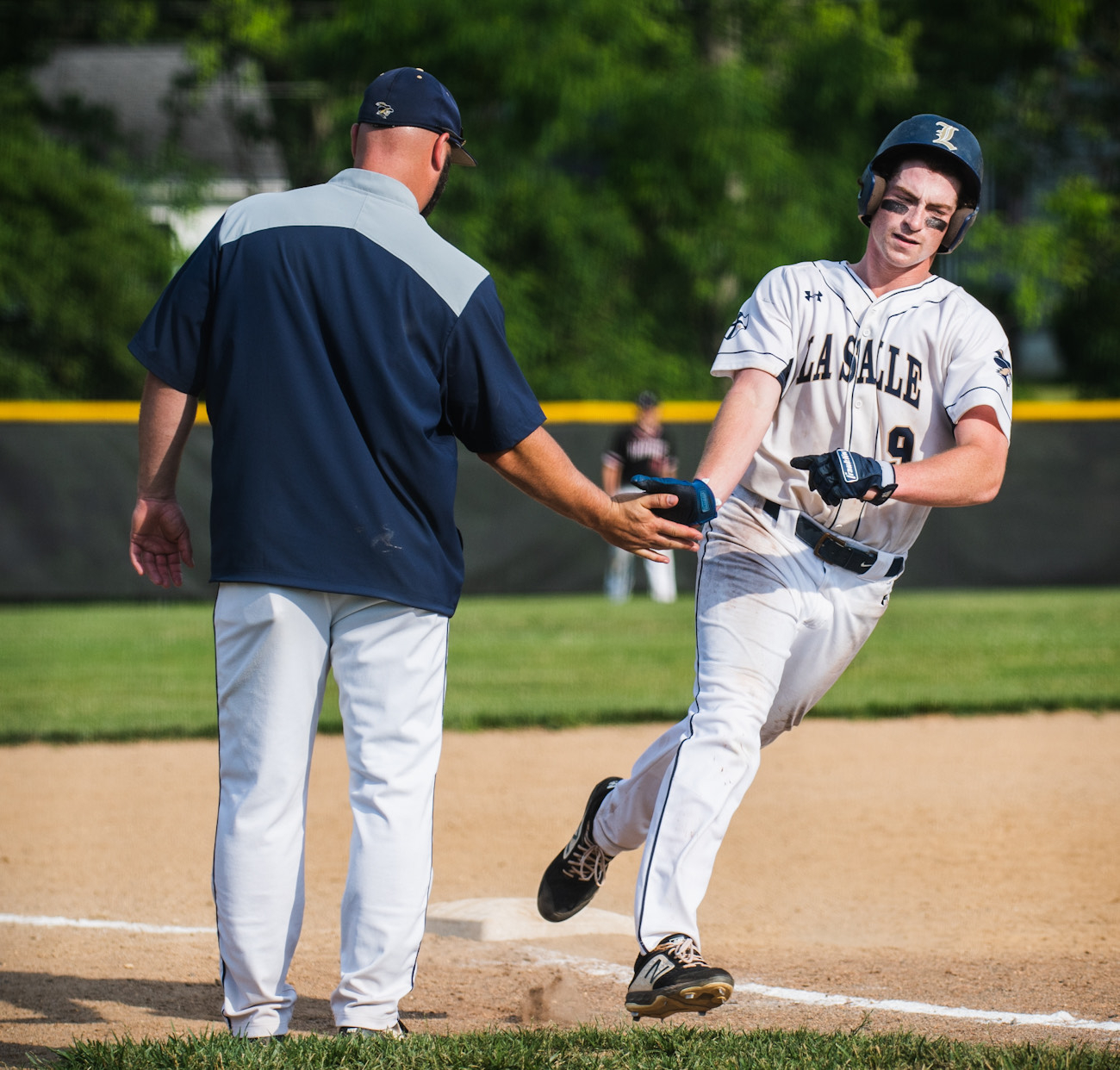 LaSalle’s Joe Cattie (9) celebrates with the third base coach after launching a home run over the left field wall against Hatboro-Horsham on Monday, June 7, 2021. (James Beaver/For MediaNews Group)

WARMINSTER >> Joe Cattie did just what his role as hitter called for and cleaned up on Monday.

The La Salle right fielder mashed his way to three hits, all going for extra bases and the first two accounting for his team’s first four runs of the day as the Explorers dueled Hatboro-Horsham in the first round of the PIAA 6A baseball tournament. Once they got going, there wasn’t much that could have slowed the Explorers down.

La Salle churned through its order and kept plating runs, topping the Hatters 14-1 in five innings at Archbishop Wood.

“I think a lot of it is the preparation we have day in and day out at practice,” Cattie, who went 3-for-4 with four RBIs, said. “Our coach (Kyle Werman) won Coach of the Year in the PCL for good reason. He does the research and gets us prepared for every game so when we come out, we can string hits together and play well.”

Preparation only gets a team so far though. The players still have to step into the batter’s box and produce.

Werman basically summed up his team’s production that way as well. La Salle didn’t struggle to put the ball in play with 10 hits and with many of them coming with runners already on base, there were plenty of scenarios ripe for offensive production. Cattie, who has been hitting the ball well of late, stepped into one of those situations in the bottom of the first inning. Despite a nice play on  a pick-off and rundown by Hatters starter Jimmy Tooley to get the first out, La Salle had two on with their cleanup hitter stepping up.

The outfielder didn’t need long, ripping the second pitch he saw out to center for a two-run double.

“He’s been consistent this year,” Werman said. “He takes aggressive, competitive at-bats and eventually, the game rewards you. His numbers in the regular season don’t jump off the page but the quality of contact does. 20 games is not very much, it’s three weeks of a big league season and you can get in a slump for that span so for a guy that’s been in the middle of our order taking competitive swings, it’s good to see him get rewarded.”

Two frames later, in the bottom of the third, Cattie again came up with a runner on and a chance to influence the score. This time, he went bigger, launching a two-run home run to left-center, doubling his team’s lead and getting the offensive march really underway.

“It’s a hot day, I was trying to see the baseball as well as I could, my timing definitely felt good,” Cattie said. “I don’t know, I had a good day.” LaSalle’s Joe Cattie (9) celebrates after hitting a double against Hatboro-Horsham Monday, June 7, 2021 in the opening round of the PIAA Class 6A playoffs. (James Beaver/For MediaNews Group)

That was all the offense La Salle would need but the PCL and District 12 champions were far from done. Three of the next four batters reached on walks, giving Hadson-Taylor his chance to produce from the No. 9 spot. The third baseman, sure-handed defensively all game, did just that with a two-run double to right and later scored on Jake Whitlinger’s two-run single in the sixth-run third inning.

If there was any remaining doubt it wasn’t Hatboro-Horsham’s day, that was erased the next inning when pretty much everything the Explorers put into play found its way to open space. Choppers flew over fielder’s heads, skipping balls eluded gloves and La Salle kept the line moving for another six-run inning started by a Cattie leadoff double.

Hatters coach Pete Moore credited La Salle for coming out aggressive and making the most of its opportunities. It wasn’t the kind of ending the fourth seed from District 1 wanted, but Moore had nothing but praise for his players.

“There’s nothing you can do, we’re making good pitches and those are the breaks sometimes,” Moore said. “We went from a team with one returning guy with varsity experience and no offseason at all that started 2-5 to making the state tournament. We just said out there how proud we are of the guys and all the work they put in.”

Tooley, a senior, was the only experienced player back and led his team as the ace pitcher and a clutch hitter. While he didn’t have the pitching outing he wanted, Tooley went 2-for-2 at the plate and echoed his coach in praising his team’s character.

“This year was absolutely crazy,” Tooley said. “We built this as a team. I was the only guy with varsity experience, so it’s crazy we were able to do all of this.” LaSalle’s Eric Shandler (8) makes a nice play to get Hatboro-Horsham’s Justin Kahrimanian (25) on a close play at first in the opening round of the PIAA Class 6A playoffs on Monday, June 7, 2021. (James Beaver/For MediaNews Group)

Brian Baquero had the big hit of the fourth with a two-run single to kick off a string of four straight RBI knocks. Nick Astolfi followed with an RBI single, Hadson-Taylor doubled in a run and Whitlinger got his third RBI on a single. Mason Sermarini added a sac fly for the final margin.

Masked by all that offense was an efficient outing from right-hander Ryan Marler, who gave up one unearned run in his four innings. The senior came out firing and managed to keep the Hatters mainly off-balance using his three pitches, save the two hits to Tooley and a bunt single by Jack Elwell that ended up being the SOL Liberty side’s only run.

“He wasn’t predictable,” Werman said. “It didn’t feel like you could sit on anything on any count and that makes you uncomfortable, maybe you can’t get your best swing off. (Hatboro-Horsham) is a dynamic group, they run, they’re aggressive but we wanted to make them string multiple hits together to beat us.” LaSalle’s Mason Sermarini (4) after Joe Cattie (9) connected on a double early in the game against Hatboro-Horsham in the opening round of the PIAA Class 6A playoffs on Monday, June 7, 2021. (James Beaver/For MediaNews Group)

La Salle returns to action Thursday when it faces District 11 champion Emmaus, a 2-1 winner over Governor Mifflin, at a site and time to be determined.

“Everybody does better when we’re all doing well,” Hadson-Taylor said. “We all want keep playing and keep going. Everybody can do their part and once that momentum is going, we’re rolling.”