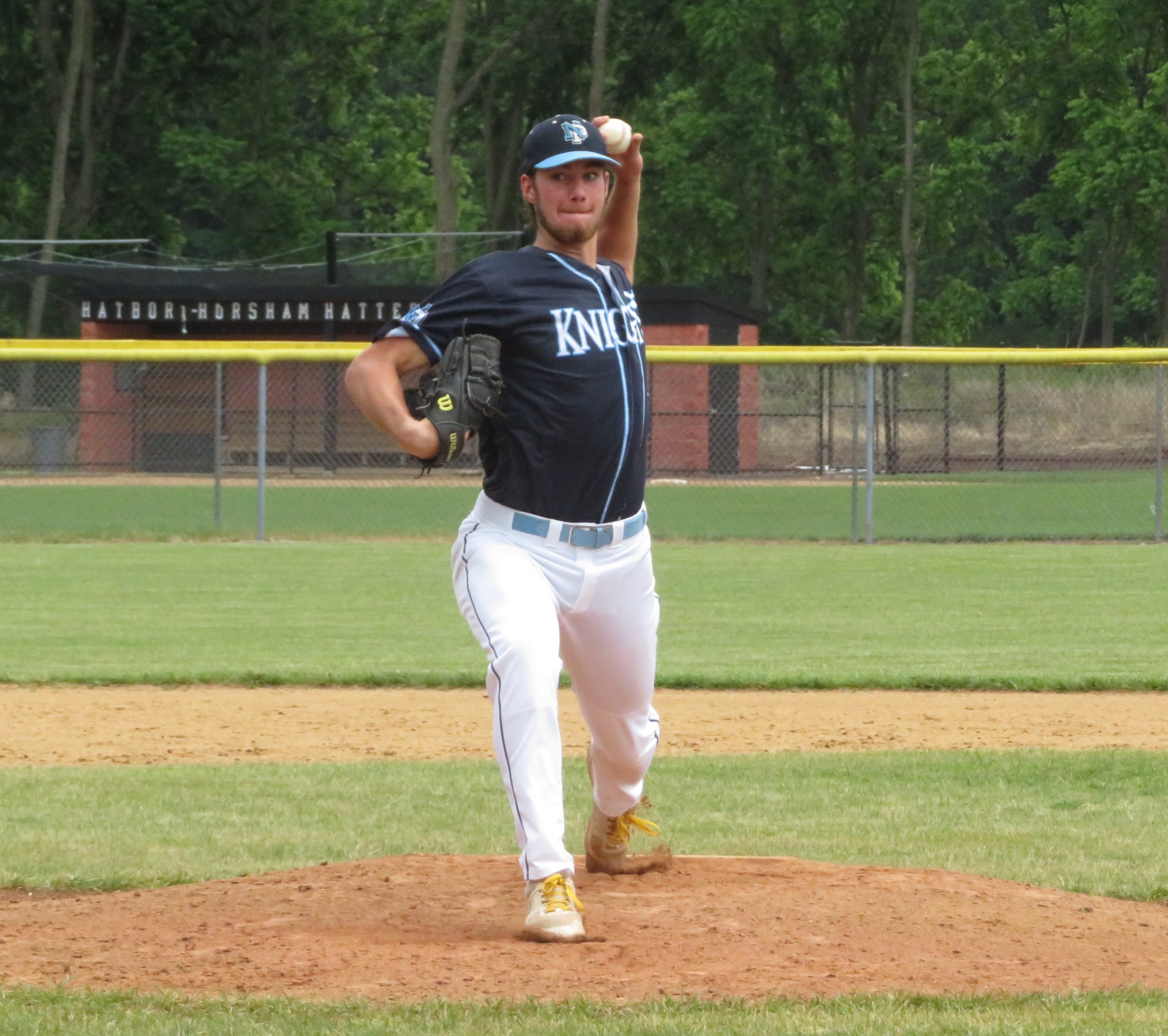 HORSHAM >> It took almost five innings and a little bit of good fortune, but North Penn’s lineup put crooked numbers on the scoreboard in a PIAA-6A seeding game against Hatboro-Horsham.

Evin Sullivan hit a three-run home run in the top of the fifth inning to put the Knights ahead and RJ Agriss hit a grand slam in the top of the sixth to add some breathing room in an 8-1 win at Hatboro-Horsham Senior High School Thursday afternoon.

Sullivan’s fifth-inning three-run blast came after a bit of controversy. With one out, a runner on second and trailing 1-0, Agriss hit a fly ball to left centerfield. Hatboro-Horsham’s Jimmy Tooley raced into the gap to catch the ball and quickly throw it into the infield. During the process, the ball came out of Tooley’s glove and hit the ground. The umpire ruled no catch and the three-man crew huddled up after the Hatters said it was dropped on the transfer. After a lengthy discussion, it was ruled no catch.

After a fielder’s choice, which would have ended the inning if the play was ruled a catch, Sullivan stepped to the plate with runners on first and third. Manero didn’t have Jeff Sabater steal second because he thought Sullivan would get walked. The No. 3 hitter delivered with a no-doubt-about-it home run over the left field fence, giving the Knights a 3-1 lead.

“I got to the 3-1 count after he threw a couple curveballs, couple fastballs,” Sullivan said. “I was just sitting right down the middle and I was fortunate enough to get it right there.

“I think (the home run) showed everyone we can get on (Hatters starter Cole Fisher). He was pitching really well and shutting us down. Finally we got something started.”

“They were being real careful with (Sullivan) and he was real patient and then he got one to hit,” Manero said, “which we needed. We were saying the other day it would be nice if some of the guys in that top part of the order could come up with some big hits – that’s what we struggled with against Boyertown (2-1 district semifinal loss). That was a game changer there, without a doubt.”

North Penn added more runs in the sixth. Colby Seelig pinch hit and came through with a one-out double before scoring on a Sam Cohen single. Jack Picozzi worked a walk and H-H relieved Fisher with Logan Fischer. Quinn Marett walked to load the bases before Agriss hit a grand slam to left centerfield, extending the Knights lead to 8-1.

“RJ needed that real bad,” Manero said. “RJ squared the ball up a lot today and he’s been putting a lot of pressure on himself. He hasn’t been exactly what he knows he can be. Today – to see him hit the ball hard every time – that bodes real well for us going into next week.”

On the mound for North Penn, left-hander Dylan Brown was dominant. He threw a complete game, scattering six hits to go along with seven strikeouts and no walks.

“His fastball was working on both sides of the plate,” Sullivan, the Knights catcher, said. “His curveball was here and there, but we started throwing his changeup later in the game and that was really effective.”

The Hatters only run came in the bottom of the third inning. Justin Kahrimanian hit a one-out single and courtesy runner Christian Gear advanced to second on a wild pitch. Jack Elwell bunted for a single with two outs to put runners on the corners and Fisher delivered with a single, giving Hatboro-Horsham a 1-0 lead.

“We didn’t seem overmatched at the plate,” Moore said, “but (Brown) was very effective changing location, moving up and in, down and out.”

Both North Penn and Hatboro-Horsham hoped to be playing for the District 1 championship Thursday, but the Knights lost to Boyertown in the semifinals Tuesday while the Hatters fell to Neshaminy. The seeding game was less about battling for the No. 3 seed and more about getting on track before the state playoffs.

“Every single time you go on a baseball field you play as hard as you can to win,” Manero said. “Nothing else feels as good as that and I think momentum is important. I don’t think you want to go into states losing a couple in a row, you want to get back and feel that confidence again. That’s what I think today was about – a little confidence, a little bit of a rebound game. Win or lose today, we’re going to face tough opponents when we get into the state tournament.”

“We knew that no matter what coming out of this game you’re going to play somebody very good in states,” Moore said. “Our goal was to come out and feel good about the way we played. For five innings I thought that we played very well and I was proud of the effort and the attitude. We’ve got to play a complete seven innings and we talked about that and I have no doubt that next week we will get back to doing that.”