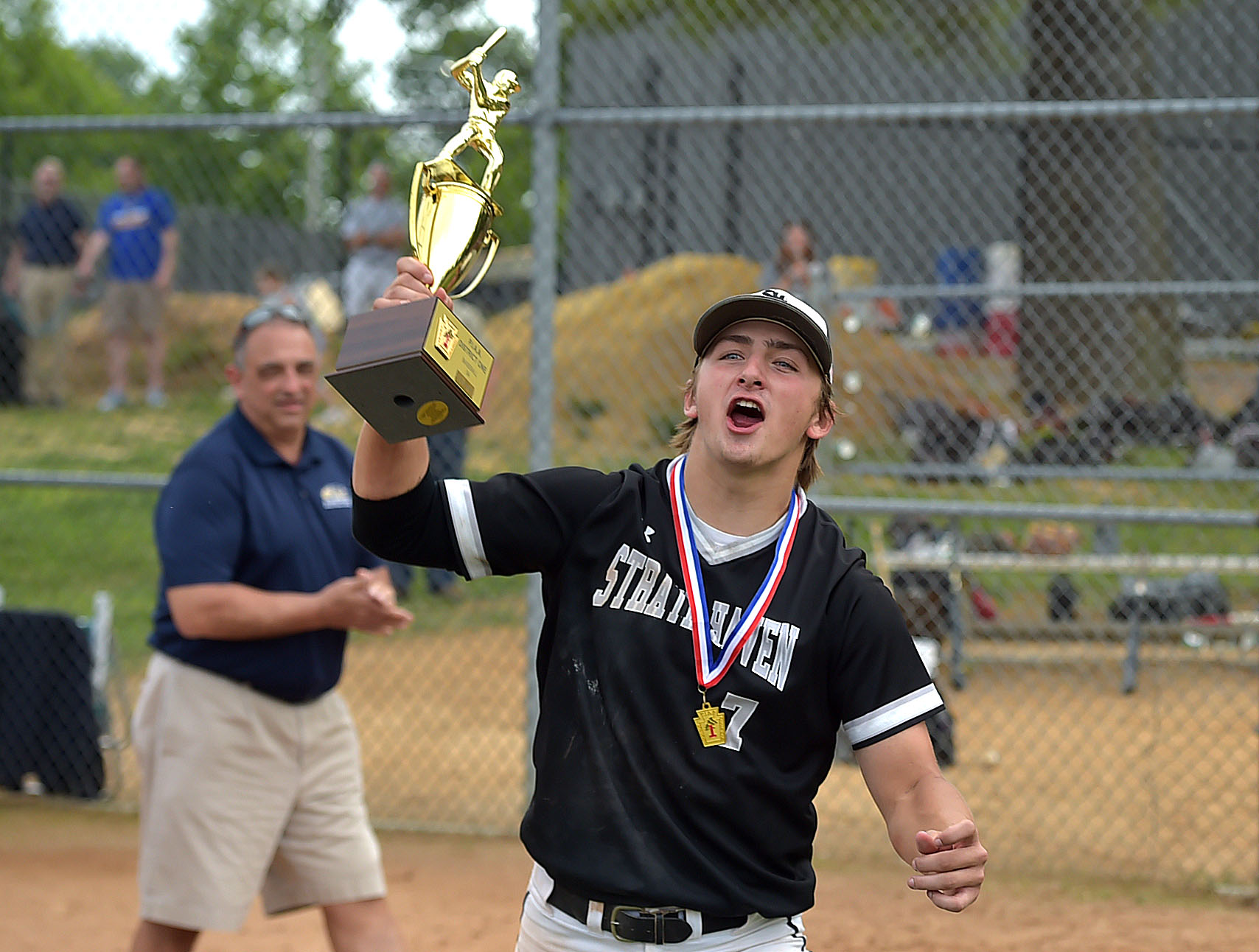 NETHER PROVIDENCE >> Strath Haven senior pitcher Koll Peichel has been the man on the mound for the Panthers all spring. And as the calendar flipped to June, that fact didn’t change.

Tuesday afternoon, in the District 1 Class 5A championship game against Oxford, Peichel worked through some early-inning woes that threatened to hike up his pitch count, before reverting to his dominant self as he hurled six and two-thirds innings, struck out seven, and allowed just five hits as the Panthers claimed the title with a tidy 6-0 win.

Strath Haven will now play the fifth place team from District 3 on Monday at a place and time to be determined, while Oxford gets the District 12 champion, also on Monday.

“I did not have command of my fastball early and my pitch count was like 65 pitches going to the fourth inning,” Peichel said. “But, I found my groove after that and became very efficient. My slider was awesome today and I was pounding the strike zone. I wanted to finish the game but my pitch count did not allow it.

“This feels amazing to be holding this trophy,” Peichel said. “I came to the field today and really wanted to take this championship and get this trophy for the school.”

Oxford left five men on base in the first three innings as the Hornets (15-5) could not get the big hit in the first, second or third innings against Peichel. Oxford had men on first and third in the second inning, but Peichel ended the threat by striking out Owen Rector. Strath Haven’s Chris Felder slides home safe with a run in the fifth inning of the Panthers’ 6-0 win over Oxford in the District 1 Class 5A final Tuesday. (Pete Bannan/MediaNews Group)

Oxford hurler Ryan Dewees breezed through the first two innings against the potent Panther (19-2) attack. But in the bottom of the third inning the Panthers broke through. After striking out Sam Milligan to start the third, consecutive singles by Marc DeCarlo and Alex Hemmingway put men on first and third with one out.

Mike Valente lofted a long sacrifice fly to right field, scoring DeCarlo and Strath Haven had a 1-0 lead. An Oxford error allowed the second run to score and after three innings, the Panthers led, 2-0.

Strath Haven loaded the bases against Dewees in the bottom of the fourth, but the Hornet hurler struck out Milligan, DeCarlo and Hemmingway to get out of a major jam, keep Oxford within reach at 2-0.

“We got those two runs but I knew we were going to need more,” Strath Haven outfielder Chris Felder said. “We need to pack on some more before we felt comfortable, and feel like we were going to hold that trophy.”

Dewees left the game after four innings due to elbow discomfort, and the Hornets turned to Connor Warren on the hill. The Panthers greeted him right away as Strath Haven piled on four runs on just two hits in the bottom of the fifth inning to take a commanding 6-0 lead.

The Panthers got a big two-run single from Luke Jacobson and a sacrifice fly that plated two runs (due to an Oxford error) from Christian Thack. With Peichel falling into his groove, it was only a matter of time before the Panthers hoisted the District 1 trophy.

Peichel got two Oxford outs wrapped around a single in the top of the seventh inning, but with his pitch count at 106, had to leave the game to widespread applause. Brett Mutz stepped in and ended things by getting Tim Haftl to wave at a 2-2 curve, and the Panthers celebrated their district title.

“He was at 41 pitches after two innings and we were starting to see what we were going to do,” Strath Haven coach Brian Fili said. “But he is such a bulldog out there. Nothing seems to faze him no matter what the situation. He just bears down and gets the job done for us.”

While the loss was depressing for the Hornets, Oxford coach Tim Rector said there is a lot of baseball to be played yet.

“They played very good situational baseball today,” Rector said. “They hit two sacrifice fly balls and got a single against a pulled in infield, so give them credit. But we are not down. A lot of people did not pick us to win our division, let alone be in this game, so we will be all right.”