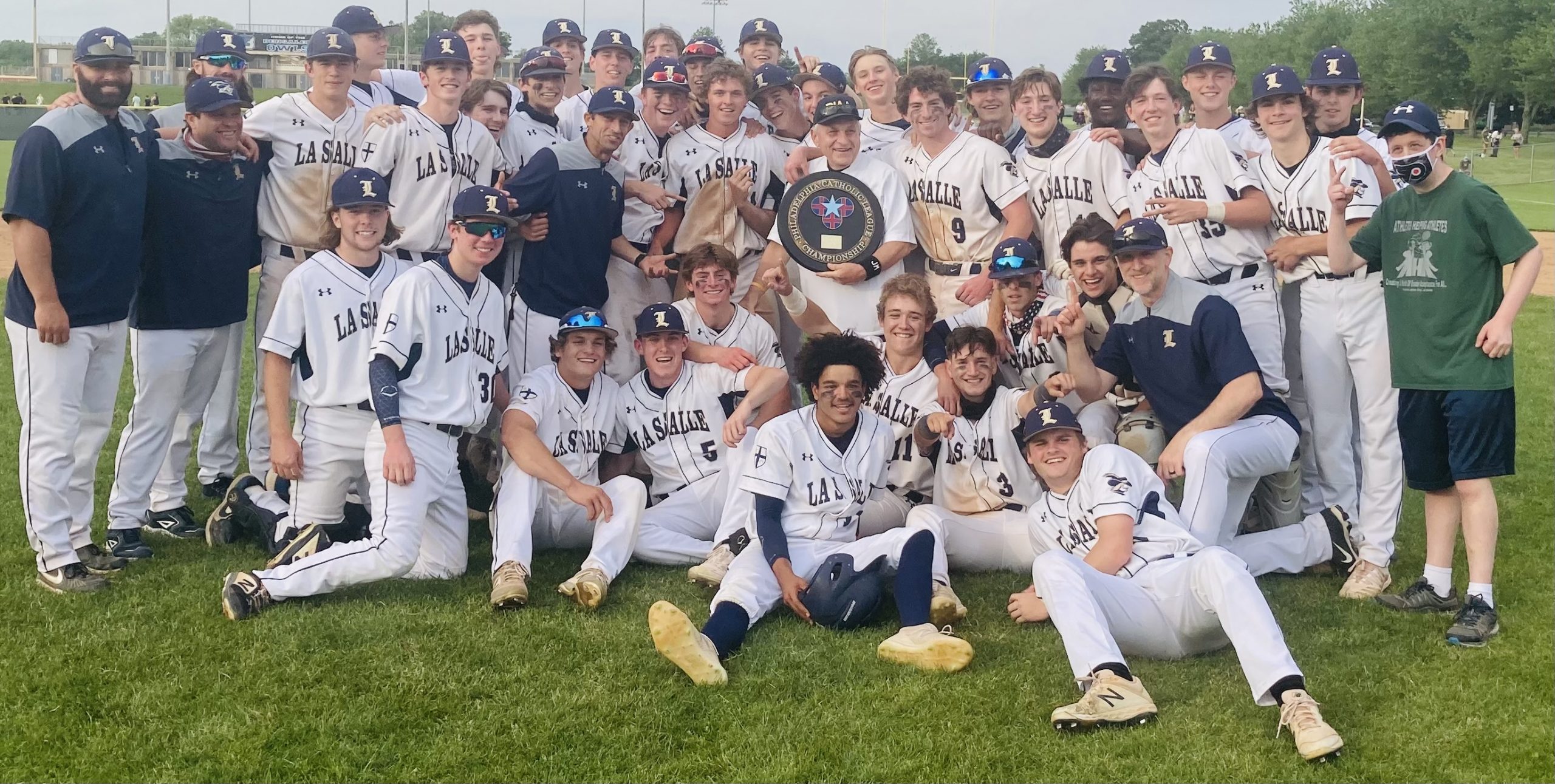 La Salle huddles with the PCL Trophy after its win over Archbishop Wood on Tuesday, June 1, 2021. (Kev Hunter/MediaNews Group)

BENSALEM >> La Salle had to work overtime for this one, making it all the sweeter.

“I’m just so proud of them for stepping up, competing, and just grinding their way to a championship,” La Salle coach Kyle Werman said. “They should be really proud.”

The Explorers rallied back from a 2-0 deficit against rival Archbishop Wood and prevailed 3-2 in eight innings Tuesday, capturing the Philadelphia Catholic League title at Bensalem High School.

“We finished,” center fielder Danny Wagner said. “That’s what it’s all about.”

Wagner doubled and scored the winning run in the bottom of the eighth, lifting the Explorers to the victory and a 15-0 mark.

“It feels awesome. You’re excited for these kids. You lose last year (to the pandemic), when you have guys ready to go for a third title in a row, and you have these guys coming back,” Werman said. “I’m just really proud of them.”

With one out, Wagner belted one to right field, and right fielder Joey Gale gave chase. The ball was just out of the reach of Gale, bouncing off his glove, and Wagner coasted into second.

Brian Baquero stepped to the plate for the Explorers, and his ground ball to the left side resulted in a throwing error to first, allowing Wagner to race home, sending La Salle into fits of celebration. “He’s done that all year. He’s just really been clutch,” Werman said of Wagner. “And you look for that. At some point, a ball was gonna fall for us. And it happend to fall late, and we got an opportunity to do something.”

“I was just thinking, get the foot down, hit a pitch hard, and I got it done,” he said. “(Wood right fielder Joey Gale) almost made a really good play but it got down and we wound up winning.

“(When I scored), I was going on the pitch there, had a pretty good jump, and that’s usually not a pitch that I’m scoring on but rounding third, I saw the throw go high, get over his head, and I scored.”

Wood took a 2-0 lead in the top of the second on a two-run home run to left by Sean Slowinski.

The Explorers cut the margin in half in the third, on an RBI double by Eric Shandler.

The Viking lead held all the way until the seventh, when Mason Sermarini drew a bases-loaded walk to tie it with two outs.

The Explorers, with Ryan Marler throwing strong in relief, won it in the eighth.

“(After a win like this, you know) you have a team that can win a championship,” Werman said. “You win a game like this and you know you’re tested.”

Archbishop Wood huddles after its loss to La Salle in the PCL Final on Tuesday, June 1, 2021. (Kev Hunter/MediaNews Group)

Wood still has life left, as both teams now prepare for the postseason.

“It was a very good game. It was two very good teams out here playing,” Vikings coach Jim DiGuiseppe said. “I thought we did a lot of good things throughout the game. I thought Ryan did a real nice job for us to start the game and (relievers) Connor (Woodson) came in and did a good job to kind of hold things down, and Mike (Trommer) did a good there at the end. Sean didn’t play against them in the first matchup this season so it was nice to see him have an opportunity to play against them in the championship (and come through with a home run).

“We’ll get re-focused and come out ready for the state tournament.”