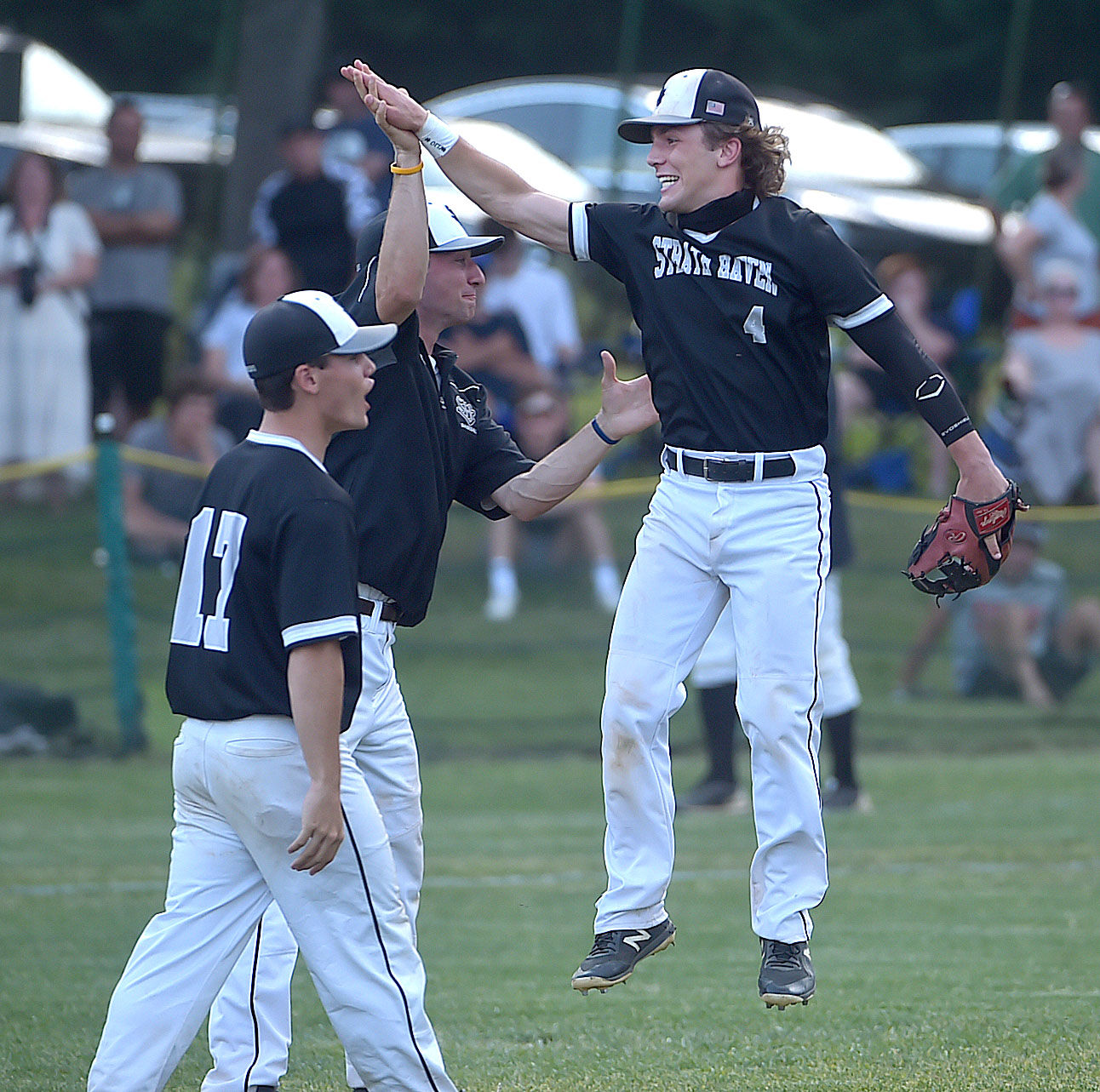 Strath Haven's Simon Bollinger celebrates after helping turn a double play in the fifth inning of the Panthers' 7-2 win over Radnor in the District 1 Class 5A quarterfinals. (Pete Bannan/Medianews Group).

NETHER PROVIDENCE — Koll Peichel said he didn’t have his best stuff Wednesday, but the Strath Haven ace was being a little too harsh on himself.

The senior righthander was effective in the Panthers’ 7-2 victory over Radnor in a District 1 Class 5A quarterfinal. He struck out eight and allowed two runs on six hits with three walks. Unfortunately, he was one out shy of a complete game after he reached his limit of 105 pitches.

“I didn’t pitch super well, I wasn’t super efficient,” Peichel said. “The ump was squeezing me a little bit, but I was hitting inner white, which is usually a strike with most umpires. But it’s … whatever. No excuses or anything. We stuck with it and, like I said, I didn’t have my best. But we kept at it and were able to come out with the win.”

Strath Haven will host another Central League rival in fifth-seeded Marple Newtown in the semifinal round Friday. The Tigers defeated No. 4 Phoenixville, 3-2, in a rain-shortened game Wednesday.

Peichel also delivered at the plate, hammering a two-run homer in the first inning off Radnor hurler Jimmy Sweet. The bomb to right gave the top-seeded Panthers a boost offensively. It was the first time in Peichel’s high school career he hit an over-the-fence home run.

“I didn’t expect it to be a fastball, but I saw it was going to be a strike, so I thought I might as well swing,” he said. “I hit it good. I don’t want to say I was lucky or anything. I mean, I’ve never hit one out that far, not even in BP.  I started walking down to first and thought there was no way it had that much tail (to go foul).”

Koll Peichel turns on a pitch and absolutely crushes it for a 2-run homer. @PanthersSH 2, Radnor 0 bottom 1st pic.twitter.com/bQ0C9eWtH6

On the mound, Peichel overcame a brief scare in the top of the first inning. Radnor leadoff hit Austin Marx jumped on the first pitch of the game, a hard-hit single to left field. The ball got away from Alex Hemingway in left, enabling Marx to scoot up to second base. Peichel settled in and got out of the inning unscored upon.

“He battled. I thought the strike zone was pretty tight, but he battled out there,” Haven coach Brian Fili said. “I thought he was putting a lot of pitches on the outside corner, but they weren’t giving them to him. It frustrated him a little but, but he’s got good enough stuff to get through.”

Peichel retired the side in order only once, but received plenty of help from his friends in the field.

In the fourth inning, Radnor’s Danny Rosenblum ripped an opposite field hit to right field, driving home the team’s first run. Rosenblum stepped on second base and kept running, but an excellent relay nabbed him at third. Sam Milligan fired from right field to second baseman Simon Bolinger, who threw a strike to third baseman Mike Valente.

“That felt good. It was a huge play,” Bolinger said. “I looked back a little bit right before I got the ball and I noticed that he was kind of lagging behind there, the runner was just passing second, so yeah … I just took the ball out of my glove and I threw it. I was watching the ball and it went in Mikey’s glove. It definitely felt really nice.”

Following a one-out walk in the sixth, Haven turned a 6-4-3 double play. Shortstop Christian Thack dove to his left to knock the ball down, then flipped the ball to Bolinger, who fired to first baseman Luke Jacobson.

The senior-laden Panthers pride themselves on their defensive execution.

“Christian and I, we’ve been playing with each for a while now and that’s something we do every day,” said Bolinger, whose one-out double in the first inning set the stage for Peichel’s two-run jack. “Our coaches work with us every single day and that comes from getting a lot of reps in practice up the middle and once you do it enough times, you get confident enough to do it in games. We’re confident enough to have a good pitcher like Koll, who can roll his ground balls and get into situations like that where we want to want to defend and help him out.”

“I thought the defense was superb,” Fili added. “The relay through from the outfield to second base and then the double play. Those guys have been doing that all year. We’ve turned probably more double plays this year than in 20 years with these two guys (Bolinger and Thack). They work at it and it’s the same two guys all the time.”

The Panthers scored the game’s first six runs. Valente knocked in Milligan, who singled, with a run-scoring grounder in the second inning to put the Panthers ahead 3-0. In the third, Haven batted around and scored three runs, knocking out reliever Shane Rebane, who replaced Radnor starter Jimmy Sweet in the first inning. Peichel laid down a drag bunt and scored on an ground out by Milligan. Marc DeCarlo and Hemingway added RBI singles in the frame.

The Panthers are enjoying the ride, but know that Marple will present a difficult challenge. Having home-field advantage throughout the district playoffs certainly helps.

“It’s awesome,” Bolinger said. “There’s no better feeling than winning at home. You know you’ve got your peers out there in left, you have your parents in the stands. It’s a familiar field, it’s great to play here and hopefully we can keep winning.”