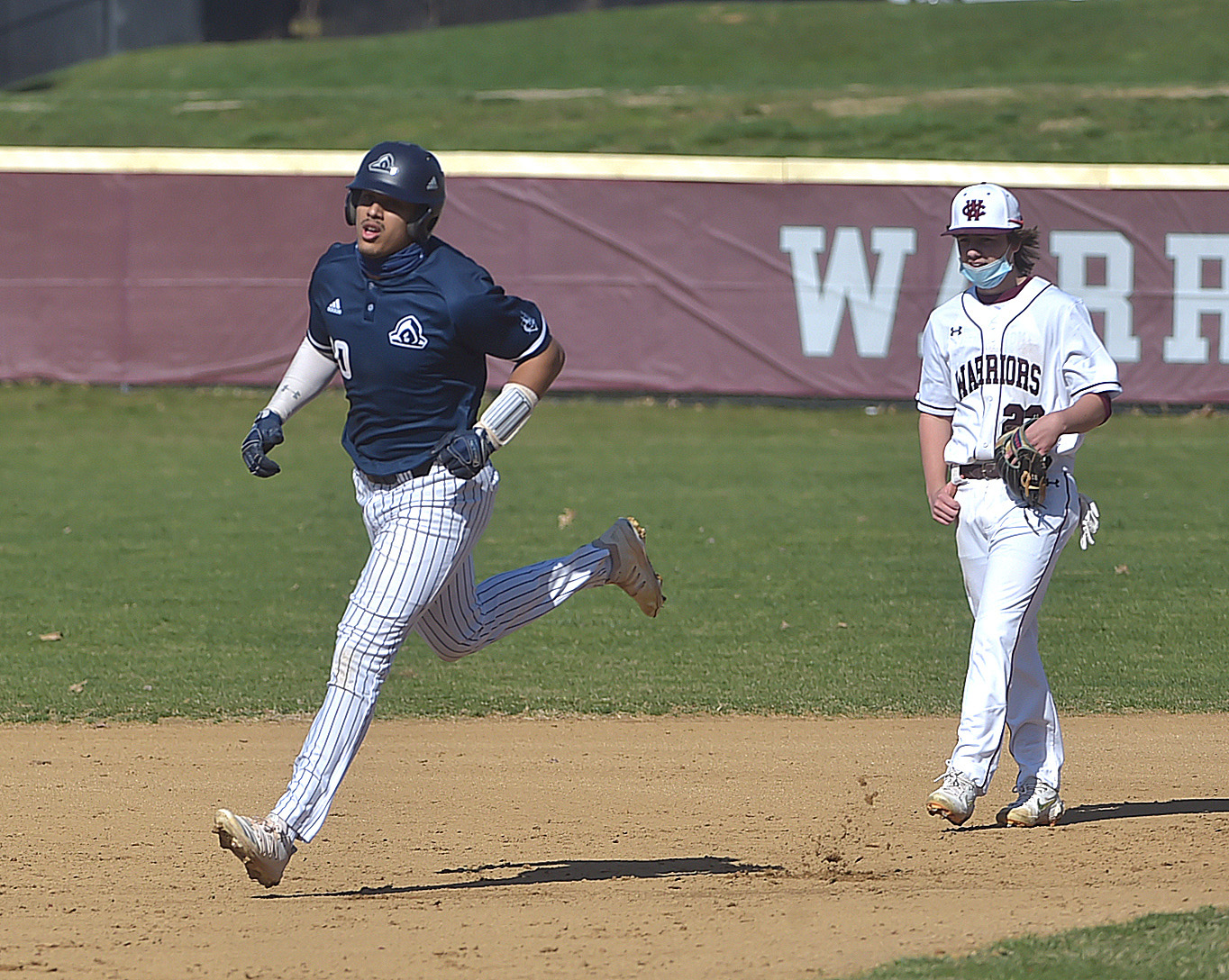 One year ago, the local baseball diamonds were empty. There were no pings from aluminum bats and pops of gloves, with the 2020 high school baseball season cancelled due to the COVID-19 pandemic.

But, 12 months has passed and area fields are abuzz with the sounds spring, and the chatter that goes along with the games as the 2021 baseball season is upon us.

Chester County has always boasted some of the best baseball in Pennsylvania, with the Ches-Mont League especially being one of the most competitive and contentious in the state. This season is no different, and one school that is looking to make its mark on the District 1 scene is Bishop Shanahan.

The Eagles, under coach Brian Boyko, have high hopes for the 2021 campaign and they are led by two University of Maryland commits: Simmi Whitehill, a flashy fielding junior shortstop, and senior pitcher Dan Shields, who leads a deep pitching staff.

Whitehill and his teammates are thrilled to be back playing baseball.

“Last year was very tough on all of us not having baseball,” Whitehill said. “It’s a great feeling to be out here again with my friends playing baseball. We are looking forward to having a real good season. We are a very tight-knit group and we realize that in the Ches-Mont League, because it is so tough, you have to really bear down every game. I really like the pressure of playing shortstop. My teammates trust me to make the plays and get the ball to first base.

“This league is so tough and has so many good pitchers, you get a lot of 1-0, 2-1 games and every play is so big,” Whitehill said. “I really feel good about this team, I love the coaches, the school and we are in a good frame of mind.”

Whitehill has really come on as a fielder and Boyko expects big things from him and his squad this season.

“Simmi can be very good obviously,” Boyko said. “He is a real good fielder and he is going to a good baseball school in Maryland. We also have a real good player in Jake McCarter, who is going to play in college at Louisiana-Lafayette. Simmi has a real big baseball IQ and is a very coachable kid that works very hard in practice every day. And getting back on the baseball field has been very good for the kids. They needed to get out after what happened last year.

“Dan Shields has a lot of potential and we are looking for big things from him on the mound this season,” Boyko said. “He has worked really hard on his game and we will need him because the Ches-Mont is no joke. We, as a league, play three games a week and pitching is so important. I tell the kids that if we get to districts we will be in good shape because we play three tough games a week in this league and see good pitching.”

Shields is also excited to be playing baseball with his team and he talked about how tough it was to see last season go by the wayside.

“It was really bad when the season was cancelled,” Shields said. “I felt really bad for our seniors because their high school careers were over and they did not have a senior season. We had a big group of juniors who did not play varsity baseball yet so we are really looking forward to this season to prove ourselves. We know that in the Ches-Mont any team on any day can beat you. That is why our coaches tell us to not take our foot off the gas pedal for any game.

“We really as a team want to make this season count,” Shields said. “I have been working my curveball. I would say that is my number one pitch, the one I go to when I need a big out. I have been throwing it a long time and I have confidence in it. With us missing last season, we are seniors now and we really want to have a successful season.”

Here is a look at the rest of Chester County baseball.

Avon Grove >> The Red Devils have a new skipper in John Bellavar and the coach is very excited to see his team on the field.

“I think we will be solid offensively,” Bellavar said. “We are led by seniors Jack Lincoln, Jacob Stretch, Sean Glatts and Ben Haughton. Each player played an extensive summer and travel ball season and we will be ready for the season.”

Coatesville >> The Raiders graduated nine seniors, six of whom who are now playing college baseball. But the cupboard is not bare for long-time Coatesville coach Hal Ziegler. The coach feels his team will hit the baseball and says this group of Red Raiders is one of the hardest working groups he has had. Coatesville will be led by junior catcher R.J. Rickabaugh, and two senior infielders Matt Stout and Joe Boccio. Ziegler also said he has about five or six pitchers who throw strikes.

Downingtown East >> The Cougars won the Ches-Mont National title in 2019, so coach Pete Susi knows about winning teams. Susi feels if his team can hit, East will be right in the thick of things in the National Division.

“I feel we have a good group of athletes,” Susi said. “I am not sure how we will do at the plate but I think our defense will keep us in games. If the bats get hot I think we will be in the thick of it at the end. We do not have the big time arms like we had the past few years but we have a bunch of kids who will throw strikes and compete.”

Downingtown West >> The Whippets will be led by first year head coach Scott Rambo, and although the Whippets were hit hard by graduation, Rambo is counting on West to be right in the Ches-Mont National race. West will be led by infielders Zach Gardner and Jack Ginsburg, who both can hit, and two junior pitchers, David Catanese and Connor Blence.

“Our players are excited to get back on the field after 2020,” Rambo said. “We feel we have the starting pitching to compete in the Ches-Mont League. We have some seniors we expect to be major contributors in our lineup and some young talent we are excited about.”

West Chester East >> The Vikings lost 11 seniors to gradation, but coach John Fleming feels he has a deep pitching staff led by senior Gavin Lilli. Offensively, Joey Wileczek is one of the fastest players in the league and freshman Ryan Price will help with the offensive production.

West Chester Henderson >> The Warriors are led by the dean of Ches-Mont League coaches in Luke McNichol. The Warriors skipper feels he has a pretty deep pitching staff, led by Stony Brokk University commit Eddie Smink. The Warrior offense should be led by junior cather Owen McCarthy and senior infielder Eric Angle.

Great Valley >> The Patriots have a new coach in Travis Turgeon and are looking to get back to the top the Ches-Mont American under the new boss. Turgeon is encouraged by his pitching staff, led by seniors Keenan Metrick and Justin Harrison, along with and junior Naveen Narayanan.

Oxford >> The Hornets are under the direction of former Avon Grove coach Tim Rector, and although they have only one varsity returning player — pitcher Joey Morton — Rector is encouraged by the talent he sees.

“We graduated 11 seniors and only Joey is back,” Rector said. “But we have a lot of talent I feel. They just do not have the varsity experience yet. Along with Joey Morton we have junior pitcher Ryan Dewees and senior infielder Tyler Harris. I feel we are going to be able to compete.”

Unionville >> The Longhorns are another group featuring a first-year coach in Chris Valis, who took over from Mike Magee. Valis takes over a team that is usually in the hunt for the division title, and senior outfielder Jack Regenye leads the Longhorns attack. Pitchers Sean Matson and Stevie Thomas are also going to be counted on and infielder Tiernan Daly is a very good infielder.

West Chester Rustin >> The Golden Knights may very well the preseason favorite in the American Division, and coach Brad Harkins talked about his team’s experience.

“I would say the strength of our team is a combination of veteran players, depth and the willingness of the players to play as a team,” Harkins said.

Collegium Charter >> Collegium will be competing in the Bicentennial League for the first time and Cougars coach Dave Slusser feels very good about his very young squad, led by senior infielder Brandon Traut and sophomore Cole Sutton. Slusser feels that his team will be able to score some runs.

Conestoga >> The Pioneers should be near the top of the Central League this season and coach Matt Diamond is counting on outfielder JT Zellfrow to lead the Pioneers offense. Zellfrow has a big arm and very good speed. Senior infielder Alex Jones is a power hitter and Diamond says Jones will play a very big part in the Conestoga offense. Junior pitcher Shane McCullen stays down in the strike zone and has good control.

Devon Prep >> The Tide compete in what is arguably the best league in the state — the Philadelphia Catholic League — and Tide coach Mark Aquilante feels he has a very talented roster this season that is ready to compete. Senior pitcher Jack Eshleman is the Tide’s number one man on the mound and senior catcher Paul Grycewicz and infielder Bere Bauers willed the Devon prep offense.

“Our biggest strength is our overall depth,” Hilliard said. “From a leadership standpoint, we have a very senior heavy team and some very experienced and mature players like Fran Oschell, Lonnie White and Cam Conley that have all been around for a bit and know what the expectations are and how to set the example for the group.”

Westtown >> In the 2019 season, Westtown advanced to the Friends League title game. After not having a season in 2020, Moose coach Kurt Kebaugh sees good things ahead for his team.

“I think we have a real good shot of competing for the Friends League title again after reaching the championship game in 2019,” Kebaugh said. “We have almost all of our team back from last year and are very excited to get to compete again after having our season cancelled in 2020. We have a deep pitching staff and talented lineup with five seniors and some underclassmen who will really contribute.”

Kebaguh is really high on pitchers Ewen Donald, a senior, and sophomore hurler Taj Donald. He feels the Moose offense will be led by junior catcher Jake Diaz and sophomore outfielder Carl Wagner.