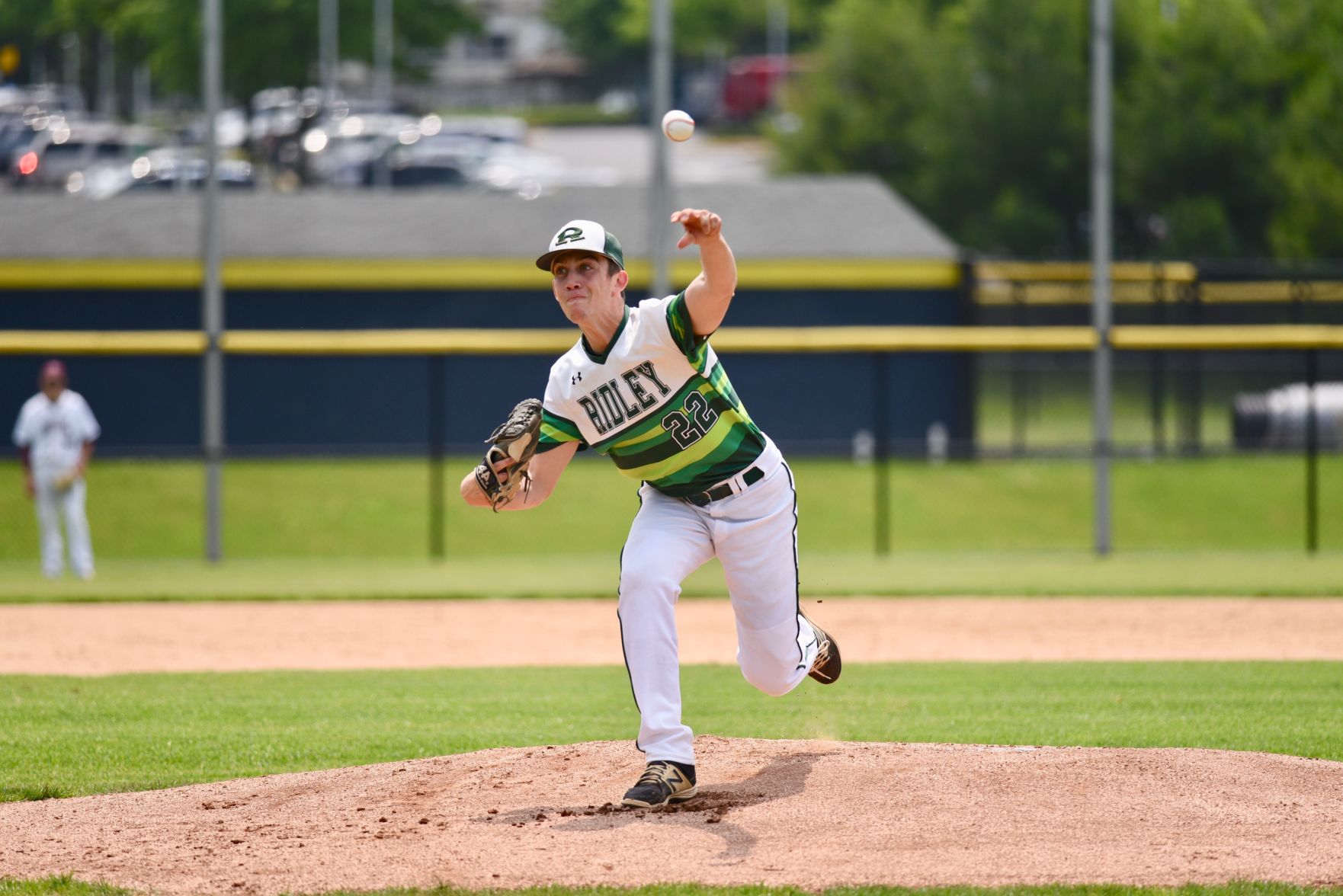 It turned into an impromptu Media Little League reunion.

On the Del Val League side were Ken Jensen of Sun Valley and Chuck Andress and Jake Haus from Malvern Prep, and over in the Central League dugout were Brady Mutz (Strath Haven), T.J. McNeely (Ridley) and Dylan Bittle (Penncrest) just to name a few. Sun Valley’s Ken Jensen, named as the Joseph J. Barrett Sr. Memorial All-Star Game MVP Saturday, shows off the prized bat awarded to him for the honor. Jensen had a hit and knocked in three runs, then tossed two innings of relief to get the save as the Del Val League team defeated the Central League team 6-4 at Neumann University.

All those players helped pump up the Media Little League competition not so many years ago.

“I didn’t expect it, so when I got here and saw all these guys, it made the game a lot more fun,” said Andress, a resident of Wallingford. “It definitely made everything exciting.”

There wasn’t much time to get reacquainted before the game, so the former teammates waited until after the “Del Val League” team held on for a 6-4 victory to catch up.

“This is the first time I’ve seen Kenny Jensen since then because at Malvern, we don’t play Sun Valley or any of the other schools,” said Andress, who hopes to walk on at Saint Joseph’s. “My dad (Mike) taught a bunch of us. I played district ball with Dylan since we were nine. So it was pretty cool to see those guys.”

Jensen and Andress had a pretty neat experience once the game started. They’re a big part of the reason the Del Val team – which actually was heavily supplemented by players from Catholic League and Inter-Ac schools, along with the Ches-Mont’s Sun Valley – was able to win for the second game in row, something that hasn’t happened since 2007, when Phillies infielder and Malvern Prep grad Phil Gosselin was part of the squad. The Del Val won the game in 2017. Last year’s game was cancelled by weather.

Jensen drove in three runs and threw two scoreless innings to save the win for Haverford School pitcher Sam Chase and earn game MVP honors, the first Sun Valley player to receive the honor since Sam Farnell in 2009. Jensen drove home a run with a ground ball in the top of the sixth inning and ripped a two-run single with two outs in the top of the seventh to break the game open.

But it was his work on the bump that was the difference for the Del Val.

Jensen took over for Interboro’s Jaren Delliprescoli after the Central put three runs on the board in the bottom of the seventh inning to cut the deficit to 6-4. Jensen gave up a single to McNeely in the eighth inning, then pitched out of a first-and-second, one-out jam in the ninth inning to nail down the save. He got Bittle looking for his only strikeout to end the contest. Jensen pounded the corners to keep the Central League hitters off balance.

“That’s usually what I try to do, work the outside and the inside,” said Jensen, who hopes to walk on at Widener. “I don’t have a fastball to blow it right by the hitter so I have to work around him.” Andress played a key role, too. He ripped an RBI double to start a three-run outburst in the sixth inning. Andress singled and scored again an inning later. He finished 3-for-4 with two runs scored and one RBI.

“I got a fastball down the middle and didn’t miss it,” Andress said of his double. “It was fun.”

Pitchers Steve DiBattista (Bonner & Prendergast) and the Fords’ Chase were the reason the Del Val only faced a 1-0 deficit until scoring three runs in the sixth and seventh innings. DiBattista started and allowed two hits and one unearned run in three innings. Chase, a converted catcher who will attend TCU, gave up one hit and one walk in three frames to get the win. Five of the nine outs he recorded came on popups or line drives to the infield.

“That’s usual for me, manufacturing outs with contact,” Chase said. “I was just looking to get outs with contact and I mixed in a two-seam fastball with my other pitches and it all worked out pretty well.”

The same can be said for the Media Little League guys. Jensen, Andress and Haus were a combined 4-for-9 with five RBIs and three runs scored. McNeely had two hits and Bittle one for the Central League.

“It was an honor just being here and seeing a bunch of people I haven’t seen since Little League,” Jensen said. “It was a lot of fun.

NOTES >> Garnet Valley’s Dom Picone was honored as the John “Cakey” Dougherty/James “Jumbo” Faulkner award winner as the top pitcher in Delaware County. … Cardinal O’Hara’s Rob Benedict received the John Mooney Coach of the Year award. … Brett Craskey (Cardinal O’Hara) and Paul Denman (Haverford High) were the scholarship recipients. … Ridley’s Ryan Schreiber, Garnet Valley’s Alex McKinnon and Ethan Boni of Harriton drove in one run each for the Central League. … Ridley pitcher Jack Liberio got the start for the Central. He allowed one hit, walked two and struck out two in three innings. … The first pitch was thrown out by Timmy Orner, the great-grandson of Joe Barrett Sr.