Taylor pitches Souderton to a shutout win over North Penn 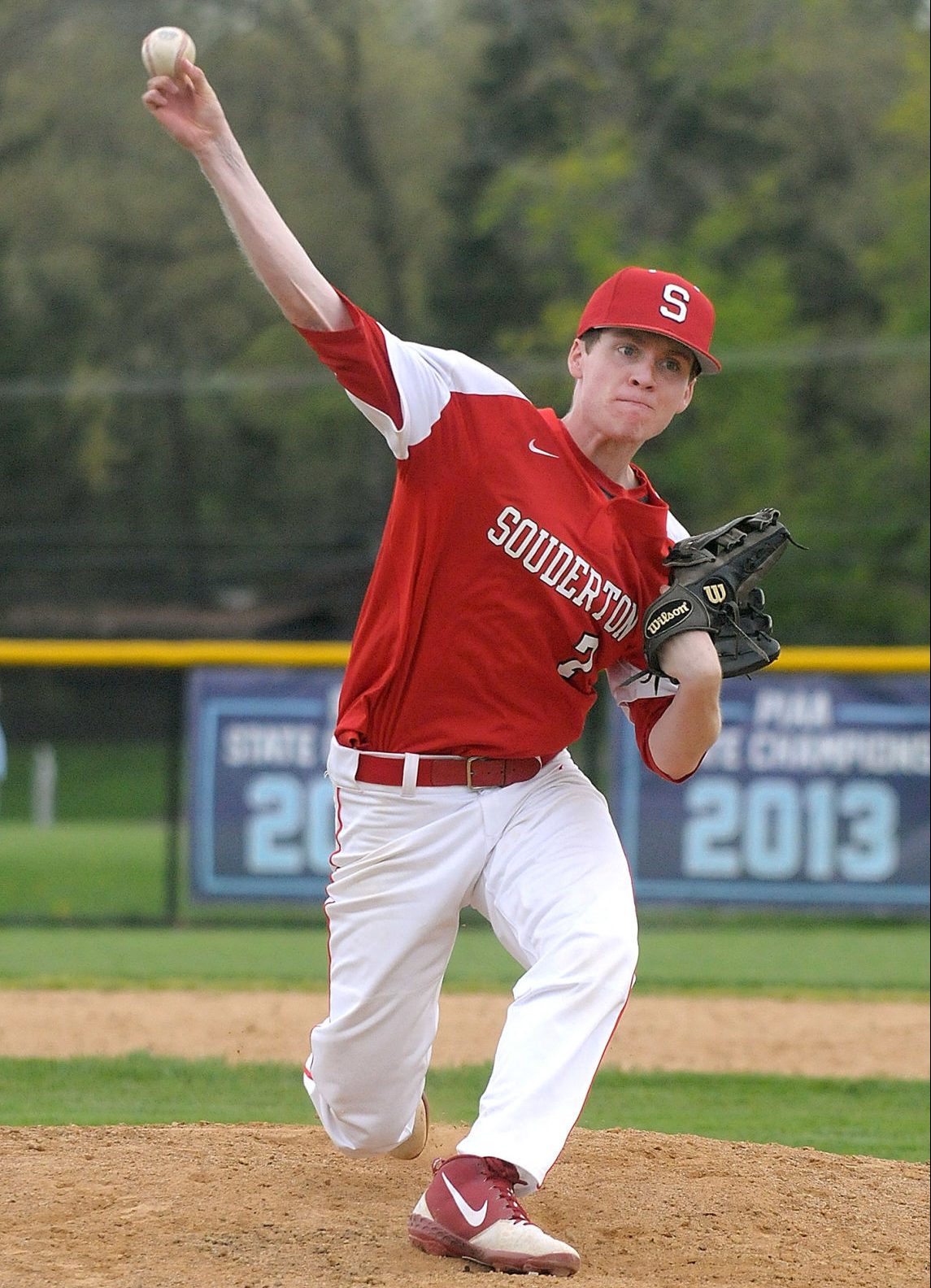 Souderton’s Luke Taylor on the mound during the Indians' game against North Penn on Tuesday, April 23, 2019. (Gene Walsh/MediaNews Group)

“We came here and got 10-runned,” Souderton Area pitcher Luke Taylor said of rival North Penn. “So to come back and beat them twice this year just feels great.”

Taylor was a major reason Big Red found their redemption, pitching a complete-game two-hitter in hurling Souderton to a 2-0 shutout of the two-time defending conference champs.

“(North Penn coach) Kevin (Manero) always puts a good team out there,” Indians coach Mike Childs said, “a team that is gonna challenge. And to do what we did this year (winning 3-0 and 2-0 over NP), I’m very proud of these guys.”

Both Jordan Morales and Taylor were 10-runned last spring in losses to North Penn. Both earned shutout victories against the Knights this season.

“Those guys were hungry,” Childs said. “Jordan got the win the first time we played them and Luke wanted it bad. He wanted it. We gave it to him and he stepped up.”

Souderton ran its unbeaten record in the Suburban One League Continental Conference to 7-0. Taylor was perfect through three, finishing with six strikeouts and zero walks.

“Mainly, (I was) just pounding the strike zone,” the right-hander said, “having them put it in play. My defense made the plays behind me.” Souderton’s Jordan Morales lays down a bunt during the Indians’ game against North Penn on Tuesday, April 23, 2019. (Gene Walsh/MediaNews Group)

With one out and one on in the seventh, Taylor struck out Colby Chan to bring the Indians closer.

“That was big. I don’t think I had that many strikeouts but I was just trying to pound the strike zone,” Taylor said. “My curve wasn’t really working that well but I just tried to locate my fastball a lot and put it in play.”

Taylor got Connor Ertel to hit into a force at second, and Souderton completed the shutout.

“He’s a senior — he gets in there and he wants the ball,” Childs said of Taylor.

With the right-hander in command, Big Red took a 1-0 lead in the third when Jacob Horton singled in Conlan Wall. Souderton extended its lead to 2-0 in the seventh when Moses Clemens reached second on an error, and moments later, his pinch runner, Dean Shaw, came racing home on a wild pitch. Other than that, Knights starter Joe Valenti was tough to hit. The lefty allowed just one earned run off of six hits.

“Joe has pitched his heart out all year,” Manero said. “He just continues to do a bang-up job every time out there. He’s gonna be one heck of a pitcher next year for Misericordia University and he’s doing one heck of a job for us this year.

“We didn’t score runs. We left a couple guys on base here and there but we just had too many strikeouts, too many bad at-bats.”

Taylor retired the first nine batters he faced. Jake Drelick led off the fourth with a single to right for North Penn’s (3-4 in the conference) first hit. “We’re playing very good defense and we’re getting very good pitching. But the hitting’s gotta click. I still think we are capable of being a team that just explodes and starts playing the best baseball of our season.”

North Penn heads to Pennsbury Thursday while Souderton is home against CB West that afternoon.