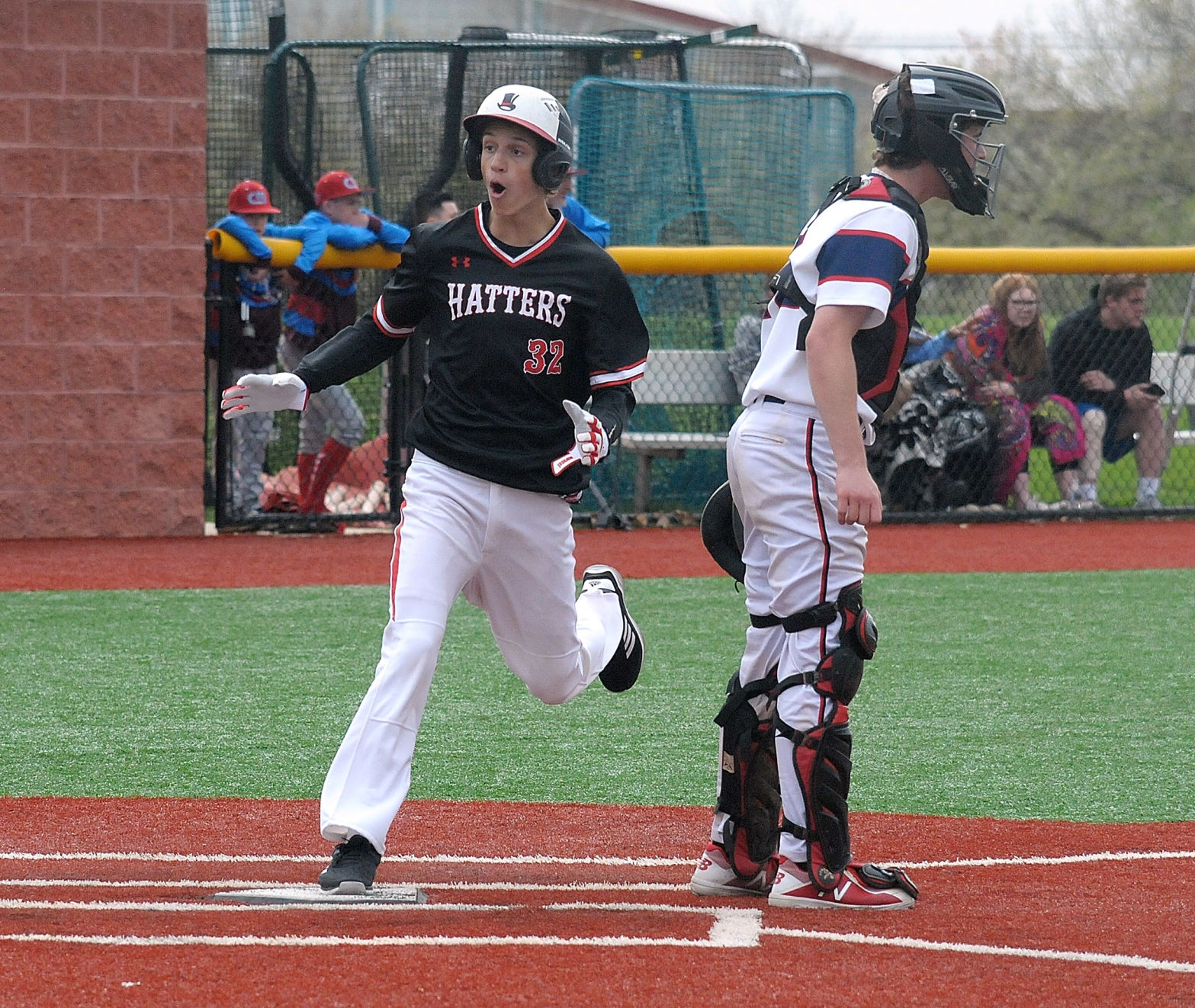 Hatboro-Horsham’s Anthony Liott celebrates as he crosses the plate during the Hatters' game against Plymouth Whitemarsh on Wednesday, April 17, 2019. (Gene Walsh/MediaNews Group)

WHITEMARSH >> During warm-ups, the Hatboro-Horsham baseball coaches weren’t sure what they were going to get out of Bradan Mallon.

The infielder had been battling illness all day Wednesday and he just didn’t have it during infield or in the batting cages. Hatters coach Pete Moore has a lot of trust in his guys however and when Mallon said he was good, Moore believed him.

Mallon rewarded his coach with an RBI triple in the second and a spectacular defensive play in the fourth to back up yet another stellar outing from Benny Wilson.

The Hatters used all of that to top host Plymouth Whitemarsh 7-2 to take over sole possession of first place in the SOL American Conference.

“I wasn’t feeling good before the game, but I knew I needed to be out here for my team,” Mallon, who went 2-for-4, said. “I wanted to help us get a big win today.” The teams entered the game tied for first in the American and it felt like a big game with a good crowd on hand and the Hatters (9-2, 6-1 conference) sending their ace to the hill. Wilson, who was coming off a combined no-hitter in his last start, was up for the game but so were the host Colonials (5-2, 5-2).

PW got off to a terrific start, with Joe Janoski belting the second pitch of the game to deep left for a double. A groundball by Kevin Reilly would have scored Janoski regardless, but a Hatters error gave PW another runner.

Moore took the blame for the first inning shakiness, saying his team hasn’t employed a lot of shifts this season but felt it was necessary against the Colonials’ Ben Mascio. Wilson didn’t falter and got out of the inning with just the one run against him.

“I think from the jump, them putting up a run to start the game, it gave us an edge to want to come back,” Wilson said. “We were fired up to do the work we needed to do in order to win the game.”

Wilson helped himself out by starting the Hatters’ second inning rally when he ripped a one-out double to the deepest part of the park. Anthony Liott followed that with a well-clubbed RBI double and Mallon followed them with an RBI triple down the left field line that plated Liott for the go-ahead run. Hatboro-Horsham’s Sean Gledhill slides into home but is tagged out by Plymouth Whitemarsh’s Kevin Reilly during their game on Wednesday, April 17, 2019. (Gene Walsh/MediaNews Group)

The Hatters were feeding on the momentum and unfortunately for PW starter Brett Bottinger, he couldn’t keep Hatboro-Horsham off the board.

“Hunting that fastball was big for us,” Wilson said. “I was working with a 2-0 count and thinking if there was a fastball down the middle, I was going to take it. I guess I started something up there.”

“The momentum there, you have to keep that rolling,” Mallon said. “He threw me a fastball and that’s what I was hunting. That’s the best pitch to hit.”

Hatboro-Horsham kept the pressure on all game, adding two more runs in the third on an RBI single by Anthony Bruno and an RBI hit by Liott who was 2-for-3 on the day. Jake Bianchini’s aggression on the bases led to a run in the fifth when he forced an errant throw stealing third and came home on the error.

Bruno hit the kill shot in the top of the seventh, lacing a two-run single into the third base gap to score Ryley Robinson and Bianchini.

“Honestly, the intensity coming into this game was just what we needed,” Wilson said. “We try to keep a high intensity anyway throughout the season, but coming into the dugout, I knew my team had my back out on the field.” Moore felt the final margin wasn’t a good indicator of the game, saying PW was a hit or two away from changing the complexion of the contest a couple times. With the teams set to meet one more time in their SOL American finale, Moore was already expecting the Colonials’ best effort.

PW coach Chris Manero felt his team did some good things but ultimately couldn’t get the big cash in it needed.

“We scored first and that’s always our plan, Wilson is a great pitcher and the one thing we’ve seen in this league is a lot of great pitching,” Manero said. “We tell the guys all the time if you want to be a good team, you have to hit good pitchers. I thought we had decent at-bats today but it was (Wilson’s) game.

“We had a nice stretch of games coming into this, but now we have to make sure we use this the right way and bounce back going into the second half.”

PW gets right back to the field on Thursday with a nonconference home game against Quakertown before a long weekend off.

“There are so many spots in our lineup where we’re capable of getting the big hit,” Manero said. “A couple things didn’t fall in where we needed them but our guys are still confident in each other that in games like this, someone will come up with that big hit.” Plymouth Whitemarsh’s Michael Radzwilka dives for third base while Hatboro-Horsham’s Jake Bianchini reaches for the throw during their game on Wednesday, April 17, 2019. (Gene Walsh/MediaNews Group)

About the only thing Wilson hasn’t done this season is finish out his starts. The junior righty again hit the pitch limit on Wednesday, forcing him out of the game with two outs in the bottom of the seventh.

Wilson said he tried to focus on his off-speed stuff Wednesday and felt good throwing his whole arsenal. Moore credited Wilson’s breakout season to his work ethic and has been impressed by the junior’s stamina.

“It’s just maturity,” Moore said. “He can throw four pitches for strikes in any count and his mound presence has improved throughout the year, which is so key at this level because kids are still maturing and learning to control their emotions. He loves to play the game; it’s his first year as a full-time starter. Last year he was our catcher and closer but man, he took the bull by the horns when he got an opportunity to start and he’s been dominant.”