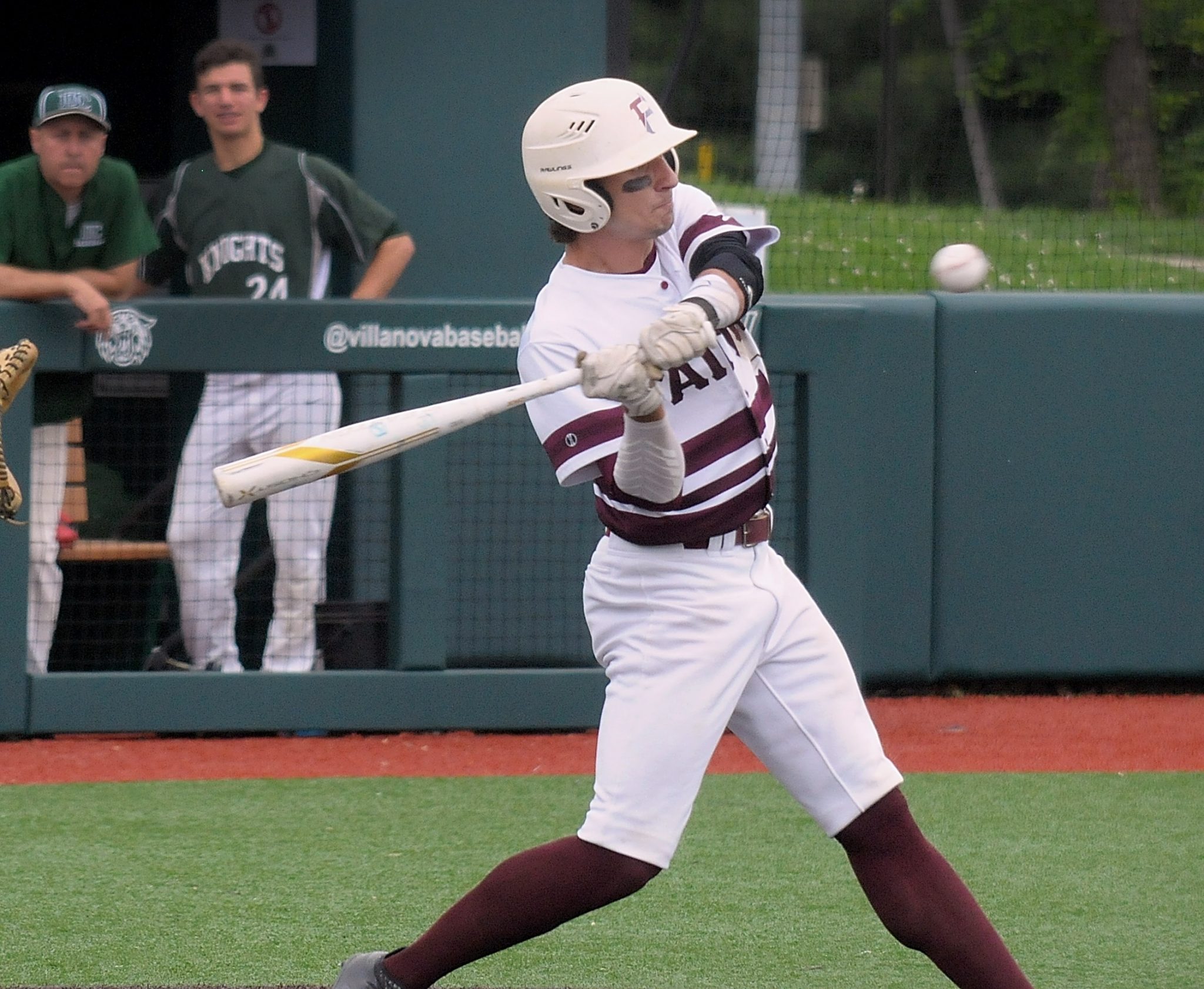 Faith Christian Academy's Josh Hodnett takes a swing against Delco Christian during the District 1-A final on Wednesday, May 30, 2018. (Gene Walsh/Digital First Media)

Defending that title was a little bit tougher.

Parker Curry hit a walk-off single in the bottom of the seventh inning to lift the No. 1 seeded Lions over No. 2 Delco Christian, 8-7, for their second straight District 1 Class-A championship Wednesday afternoon at Villanova Ballpark at Plymouth.

Curry stepped to the plate with one out and a runner on third base. Before seeing his first pitch, he walked down the third base line to talk to head coach Ed Curry.

“I was going to call a play,” Ed Curry said. “I talked to him about it. He was OK with it but he said, ‘I’d rather hit.’ I said OK. With Josh (Hodnett) on the bag we had some other plans, but I’m glad I went with the player-coach this time.”

Parker Curry singled through the right side of the drawn-in infield to break a 7-7 tie, score Hodnett and send his teammates into a celebratory dog pile on the field.

“I knew I had a guy on third,” Parker Curry said. “I just thought anywhere I could put the ball in the outfield or on the right side of the field I knew he would score. I just wanted to take this home for our team.”

Hodnett worked a leadoff walk in the bottom of the seventh, reached second on a Robert Lucas balk and advanced to third on a wild pitch. Two batters later he scored and the Lions were district champions once again.

“Leadoff baserunners are tough,” Delco coach Jeff Wisnewski said. “When that happens it’s a super high percentage that they score.”

Faith Christian’s Carter Heller on the mound during the District 1-A final against Delco Christian on Wednesday, May 30, 2018. (Gene Walsh/Digital First Media)

“We came into this game knowing we had experience from last year,” Parker Curry said. “We knew we were facing a team who hasn’t really been in many huge games this year and we’ve played a couple big games — a couple games where we’ve been down. So this wasn’t a surprise to us when we fell behind. We fell behind in a few games, but we’ve produced our runs late this season so we were banking on that and it came through for us.”

“We played hard,” Wisnewski said. “Obviously disappointed with the result, but we played hard. We played as hard as we could. They are a good team. I knew it was going to be a battle, for sure. I knew we had a good 50/50 shot. Honestly, I thought them being the one seed and it being so close a match, that might prove to be the difference and it was.”

David Forscht was the winning pitcher for Faith. He threw three innings of one-run ball on two hits in relief. He struck out four batters and walked four batters.

“David has stepped up huge for us this year,” Ed Curry said. “Last year he couldn’t throw 40 or 50 pitches without his arm being hurt. This year he’s thrown 100 and come on in relief as a senior. They don’t want it to end. I put it on their shoulders. If it ends, we went down fighting. If not, glory goes to you.”

Lucas took the loss for the Knights. He came in with a runner on first in the seventh inning. He recorded one strikeout and allowed one hit.

Faith also managed to capitalize on some Delco Christian mistakes. Hodnett scored from third on a first-and-third situation when the runner on first was picked off, Forscht scored on an error and Jacob Davis came around on a wild pitch.

Tyler Rossini and Josiah Chow each had 2 RBI for Delco. Clay Corcimiglia and Nathaniel Tutton each plated one run. Brett Tanis scored on a wild pitch.

Along with winning a district championship and clinching a state berth, this win avenges an 11-8 loss Faith suffered at the hands of the Knights back in April.

“It was a little bit of revenge,” Parker Curry said. “We were ready for it. We knew we were better. Our first game we made a few errors. We definitely did not play our best. We were ready (today). We knew we were going to come into this game prepared and ready to take on the team that was here.”

The loss brings an end to Delco Christian’s season.

“Disappointing today,” Wisnewski said. “Taking a step back that I’m not emotionally ready for right now — absolutely (it was successful season). Lots to build on.”