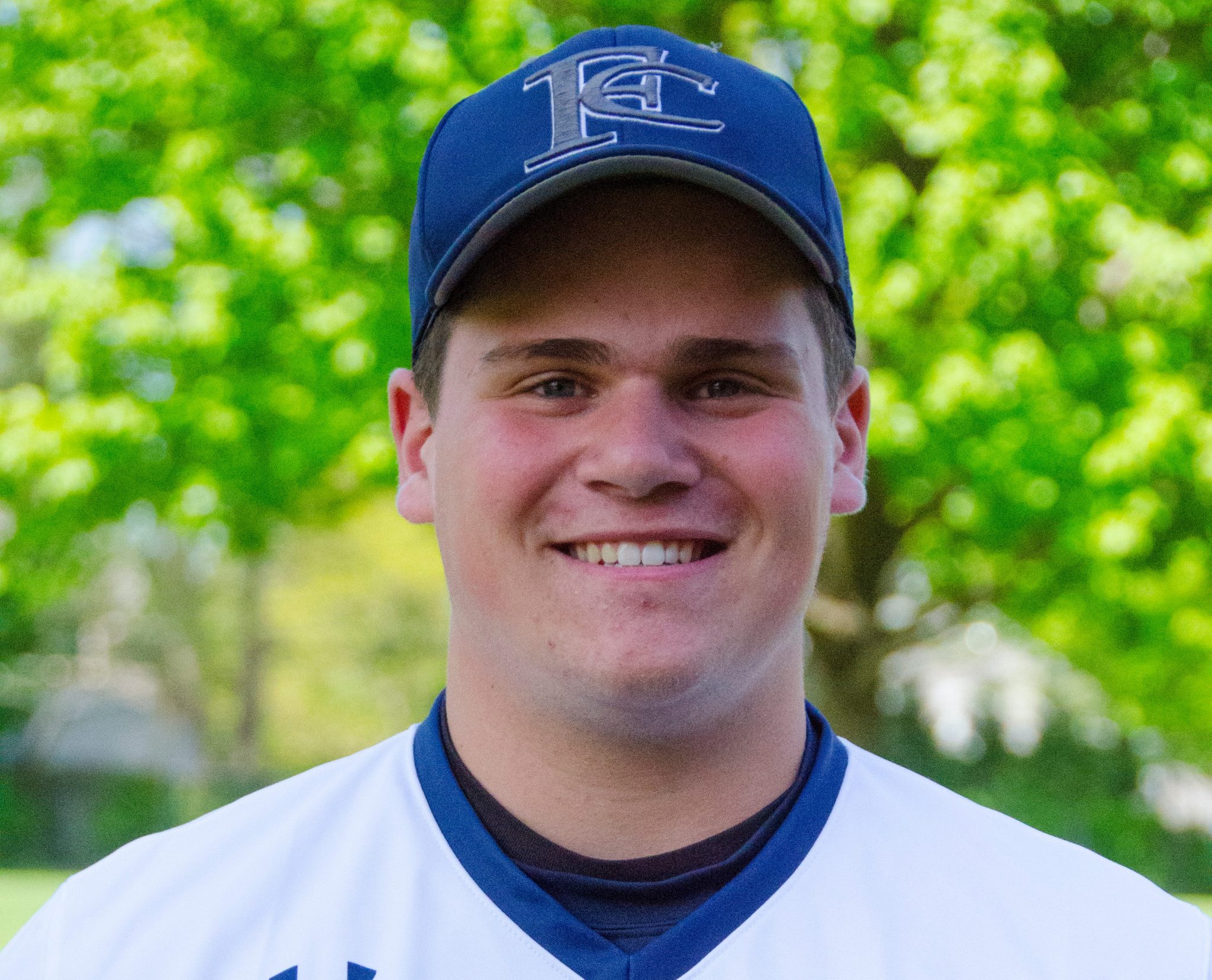 The junior captain is, in the words of Friends’ Central head coach Jon Rubin, “an outstanding defensive catcher” and is batting .381 (as of May 6) with an on-base percentage of .525, a slugging percentage of .690 and a 1.215 OPS. A Carpenter Cup participant and a second team All-Main Line baseball pick as a sophomore, Kollender is President of the Friends’ Central Student Athlete Advisory Committee. Off the field, he is a talented musician, playing the drums, guitar and piano.

Q: Have you always been a catcher? What sparked your interest in becoming a catcher?

A: I have been a catcher for about as long as I can remember.  I have always had a love of the position and a desire to be involved in every single pitch.  That said, when I was younger I thought the catcher’s gear was really cool and that was what initially sparked my interest in catching.

Q: What do you feel is the strongest aspect of your catching, and what are you working on most currently?

A: I feel that the strongest aspects of my catching are my blocking and receiving skills.  I have done a lot of work to develop these skills so when I am catching, our pitchers can trust me with any pitch they want to throw.  The thing I’ve been working on most recently is lowering my pop time. Throwing runners out has always been one of my favorite parts of catching, and the lower my pop time is, the more guys I get to throw out as they are trying to steal.

Q: What do you think has been the most important thing you’ve learned regarding hitting, particularly power hitting?

A: For me, the key to hitting is being quick to the ball and staying inside the ball.  I have this approach during every single at bat and that to me is the key to my success at the plate.  In terms of power hitting, getting my whole body involved more and more as I have gotten older has allowed me to hit for more and more power.

Q: As a catcher, after seeing an opposing hitter come to the plate a couple of times in a game, you probably have a better idea of what to throw him late in a game. Can you give us an example of how this has worked in your team’s favor?

A: I am always thinking about how we can keep a batter off balance.  So, early in the game I am looking for what makes a certain opposing player look off balance.  Our pitching coach and I usually talk a few times during a game about how we want to throw to a certain guy, and if they reach a third or fourth at bat, we usually know exactly how to get them out.

A: Being a leader has always been something I’ve tried to be.  As a catcher, I have the whole game in front of me so being extremely vocal is a big key to my job behind the plate.  I always try to lead by example both on and off the field, and now especially as a captain, it is important to be a model for how I want the rest of our players to carry themselves.  In addition, one of my favorite things about being a leader is talking to the younger players about school and about baseball. I really like to give them advice and it helps me to be close to everyone on our team, which contributes a ton to building great team chemistry.

Q: What has been your most memorable experience as a Friends’ Central baseball player?

A: Last year, we beat our rivals, Shipley, in the regular season on their home field and in front of a lot of fans from both teams.  I had a great game on both sides of the ball and felt I was able to really contribute to a great team win. It is always fun competing in an intense environment and Shipley vs. Friends’ Central always provides that opportunity.

Q: What has been your most memorable experience in Carpenter Cup?

A: The experience as a whole was so amazing to be a part of.  Playing with some of the best players in our area was truly an honor, especially on such beautiful field in FDR Park.  I was able to talk to a bunch of the players and coaches about their lives in baseball and get a lot of tips for playing at a high level.  I hope to be able to contribute to the Carpenter Cup team again in the future!

Q: Who have been your biggest baseball mentors, and what was the most important thing each of them taught you about baseball?

A: First, Coach Rubin, my school coach, has taught me a ton about the mental side of baseball and how much of an advantage a player can have if they are mentally prepared during every moment on a baseball field.  The coaches from my travel team, Diamond Baseball Academy, Vince Elsier and Frank Monastero, have taught me just about everything I know about hitting and the technical side of baseball. The most important things these three coaches have taught me are to respect the game, play hard, and always have fun when on the baseball field.

Q: Who is your favorite baseball player, and why?

A: It’s hard for me to pick one, so my top two are Brandon Phillips and Mike Trout.  Brandon Phillips has always been known for his willingness to interact with fans which is something I really like about him.  He is never too cool to go sign something for a fan or take a picture with one. I know this firsthand having met him twice at Phillies games!  Mike Trout is my other favorite, because he plays the game hard every single day. He is also one of the best to ever play baseball, so it’s kind of hard not to love him.

Q: What is your favorite ballpark and why?

A: My favorite ballpark is Citizens Bank Park in Philadelphia.  It is the only Phillies stadium I have been to and whenever I go there it makes me happy.  I have so many great memories that took place there and hopefully many more to come.

A: My love of music is key on game day as the most important thing about my pre-game ritual is my choice of music.  My pre-game playlist always starts with “Zanzibar” by Billy Joel and then from there I explore what I am feeling, but usually a mix of classic rock, country, and rap.  Besides the music, other rituals include: taping my wrists, giving a fist bump to our athletic trainer, and my pre-game warm up that is done the same way every time. Beyond that there isn’t much else to it.

Q: You wear uniform jersey No. 30 for Friends’ Central. Was there a reason you chose this number – does this number have any significance to you?

Q: Can you tell us a little about the Friends’ Central Student-Athlete Advisory Committee? As president, what is your biggest goal for the committee?

A: This is a newer committee at our school that I have had the privilege of getting on its feet.  This small group of student athletes serves as essentially a Student Council for athletes. If there are problems, we discuss them, if we want to bring something new to the athletics program we’ll discuss that, but perhaps the biggest part of our committee is our fundraisers.  We do a lot of planning around how we can involve Friends’ Central student athletes in raising money for a good cause.

Q: You play the guitar, drums and piano. What is your favorite performance song(s) and why?
A: On drums my favorite song to play is Tom Sawyer by Rush.  It is the most challenging song I know how to play and once I got it down it quickly became my favorite song to play and perform.  On guitar, probably “Here Comes the Sun,” because everyone loves that song and it is fun to perform a song that everyone knows. On piano, I like to play “Isn’t She Lovely,” because it was one of the first songs I learned and it is really fun to play.

Favorite book: Of Mice and Men.
Favorite TV show: Drake and Josh or How I Met Your Mother.
Favorite movie:  Shrek.
Favorite athlete: Mike Trout.
Favorite pre-game pump-up song:  Dreams and Nightmares by Meek Mill.
Favorite team: Phillies.
Favorite place to visit: Israel.
Favorite pre-game meal: “Whatever the wonderful Friends’ Central cafeteria is serving that day.”
Person I most admire, and why:  “My parents. They are both tremendous role models for me everyday and I never take them for granted.”
Family members:  parents Richard and Sharon, sister Sarah.
(To be selected as Main Line Boys Athlete of the Week, a student-athlete must first be nominated by his coach.)