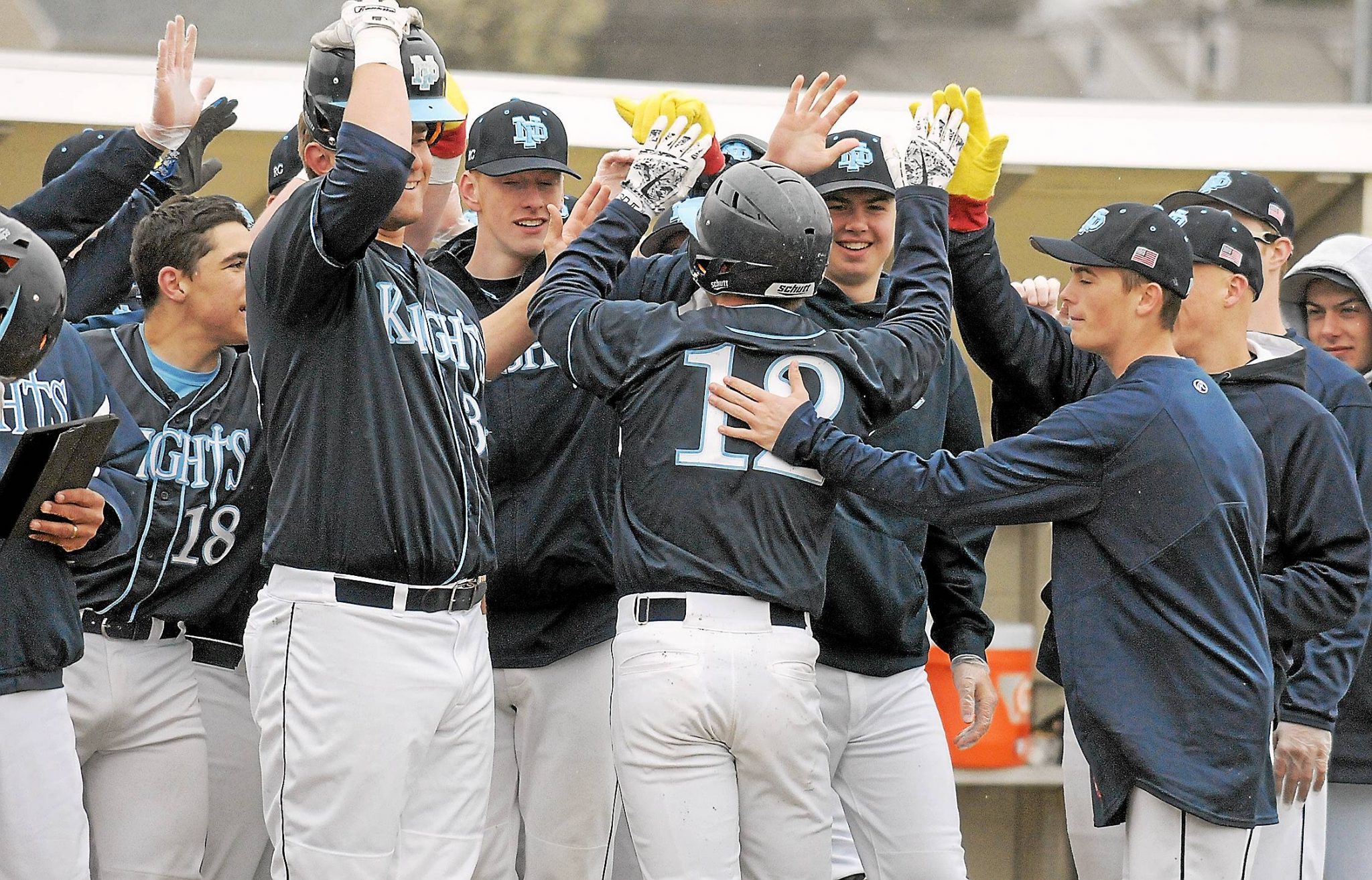 LOWER SALFORD >> The bases loaded and a steady snowfall in the top of the fifth inning set the stage for Joe Picozzi. And the North Penn senior didn’t waste it.

Picozzi belted a ball through the flakes and over the fence in center field at Vic Alderfer Memorial Ball Park for a grand slam to cap off another offensive outburst for the Knights baseball team.

“It was kind of hard to see a little bit with the snow coming down but it definitely created a cool setting for the pitch,” Picozzi said. “Like you said, I knew something was going to happen.”

Zack Miles and Hunter Hamlin also connected on home runs for North Penn, which got off to fast start against host Souderton with a four-run first and rolled from there, topping the Indians for a 13-1 Suburban One League Continental Conference victory in five innings Tuesday afternoon.

#BASEBALL: As snow falls, @NPKnights’ @JoePic7 hits a Grand Slam to centerfield to give North Penn a 13-1 lead over Souderton T5. pic.twitter.com/4npQyZUspE

“We swung the bat very well today,” NP coach Kevin Manero said. “We have a lot of guys top to bottom that are seeing the ball well and putting good swings on the ball.”

Miles came up a triple short of the cycle, finishing 3-for-3 with three-run home run in the second and an RBI double in the third.

“I was seeing the ball  pretty well. Just put the bat on the ball and that’s what happens,” Miles said.

Jake Drelick went 2-for-2 while Hamlin led off the third with a solo homer to left center as North Penn (7-2, 4-0 conference) scored at least 12 runs for the fourth straight game.

“We’ve been trying to keep a simple approach,” Picozzi said. “Just trying to hunt fastball and stay up the middle with the ball. We’ve been getting a lot of reps during practice and everything, keep our hot streak going.” After the Knights grabbed a 4-0 lead in the top of the first, Souderton got a run back in the bottom of the inning when David Gulibon drew a two-out bases loaded walk.

But on the next at-bat NP starting pitcher Kolby Barrow got Luke Taylor to ground out back to him to strand three and the sophomore right-hander settled in after that. Barrow gave up just two hits in earning the complete-game victory with four walks and four strikeouts.

“Barrow really battled on a tough day to pitch,” Manero said. “Kind of a small zone, cold day, tough to get a grip, but him going out there and putting up some quick innings there after the first inning was important.”

Starting pitcher Taylor took the loss for Souderton (5-2, 2-1), which had a three-game win streak snapped. The right-hander gave up seven runs — five earned — on five hits, walked two, struck out two and hit one batter in an inning-plus.

“We’ve been struggling with playing from behind, especially the first. Once again, we have a couple errors and a couple misplays and we’re down 4-0,” Indians coach Mike Childs said. “We can not do that to one of the better teams in our league — and league game, especially North Penn. We’ve got to fix that.”

North Penn hosts Central Bucks South Wednesday in a matchup of the last two side unbeaten in SOL Continental play at 3:45 p.m. The Knights then visit Pennridge 3:30 p.m. Friday

“It’s a big week. Last week we lost to Spring-Ford on Monday and said, ‘Hey, the best thing we have William Tennent coming up the next day, you’re going to play the next day,'” Manero said. “The same thing goes if you play a good game. You win, if you don’t show the next day with the same approach you did today you’re going to give one of those games right back. The conference is too good.

“So, it’s just one pitch at a time, one play at a time but hopefully at the end of the week, we know a little bit more about ourselves.”

Souderton is also back on the field Wednesday, visiting Central Bucks West at 3:30 p.m. The Indians end the week Friday at home against William Tennent at 3:45 p.m.

“With the 14-game schedule that counts, league schedule, yeah, there’s not much room for error,” Childs said. “And you can take a game like this – it would have been nice to get the win, especially with everything with the wins and the bonus points and everything else – but it’s also eye-opening and says ‘Listen, hey, we got get back to work.'” In the top of the second, Tyler Siddal led off by reaching on an error and Drelick singled to put two on for Miles. The junior shortstop took the first pitch from Taylor and sent it over the fence in left for a three-run shot and a 7-1 North Penn lead.

“Well, I was just sitting on first pitch fastball. If that was coming to me, I was going hit the ball pretty hard, pretty well.”

The Knights added two more in the third. Hamlin got the inning going by blasting a solo home run to left center. Two batters later, Drelick hit a one-out single and Miles followed with a double to deep center to score Drelick’s courtesy runner Griffen Juckniewitz and put North Penn up 9-1.

In the top of the fifth, Rob Weiss and Siddal drew consecutive walks. After a Drelick sacrifice bunt, Miles was intentionally walked to load the bases for Picozzi, who proceeded to hit his second grand slam of the season.

“In that situation with the bases loaded, the infield in, I’m just trying to hit the ball in the air,” Picozzi said. “Just happened to catch it a little better this time.” North Penn’s Kolby Barrow on the mound during the Knights’ game against Souderton on Tuesday, April 17, 2018. (Gene Walsh/Digital First Media)

North Penn sent nine batters to the plate in the top of the first as it went out to a quick four-run advantage.

Siddal began the frame reaching on an error. After a Drelick sac bunt, Miles collected a single and Picozzi walked to load the bases. Billy Collins was hit by a pitch to plate Siddal. Atlee Hasson followed with a double to left center for two runs while Bealer double on the next at-bat to score Collins and make it 4-0.

Souderton took advantage of four walks — one intentional — to plate a run in the bottom of the inning. The Indians came close to adding a run in their half of the second but Tim Robinson was thrown out at home trying to score on Luke Shenk’s two-out single.