District 1-3A Duals first round breakdown 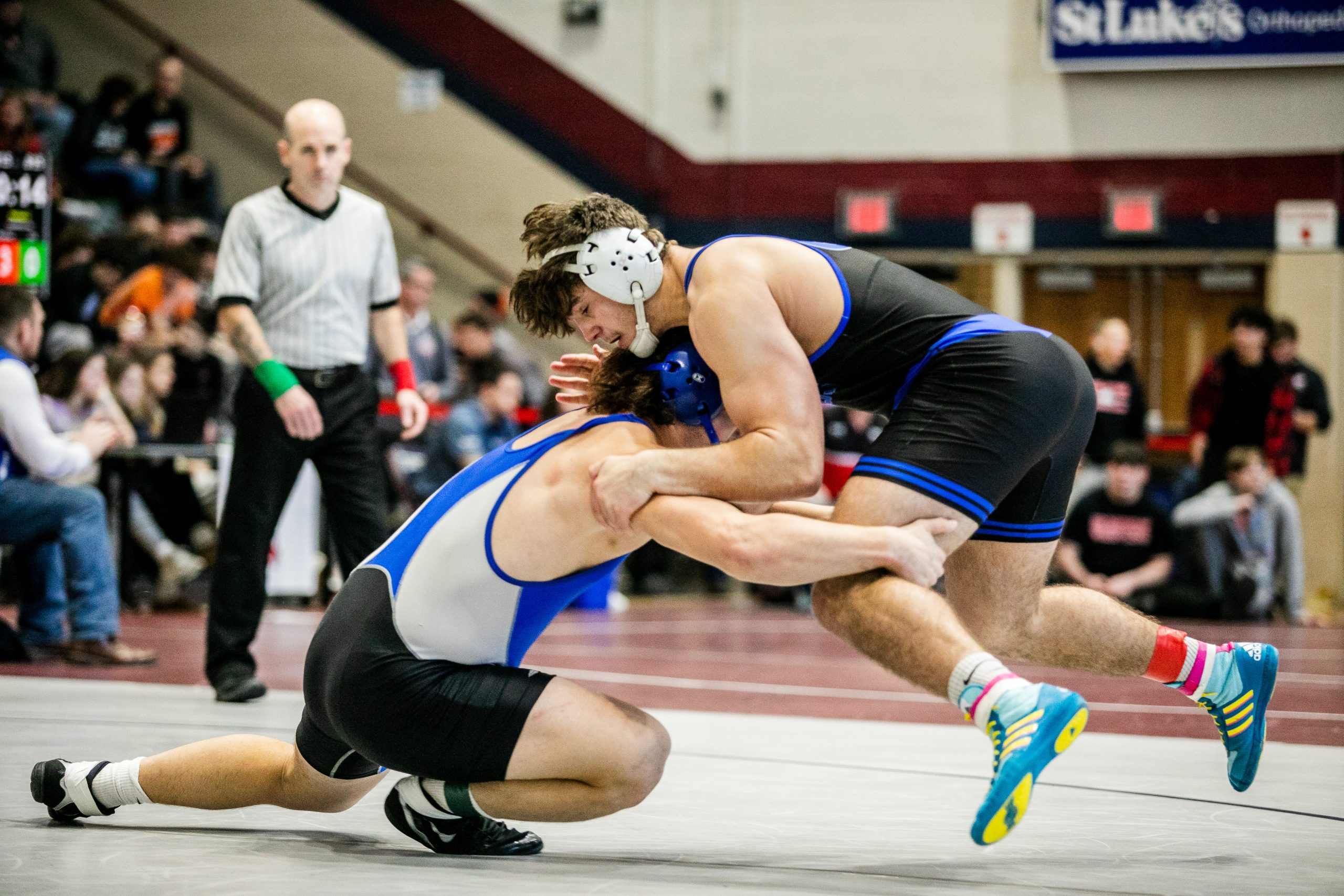 Each match will take place at the higher seed’s school, and all stats were taken from pa-wrestling.com and are as of 1/24/23.

Outlook – No team in this bracket has been tested as much as the Golden Hawks, both inside and out of District one. CR South has wrestled four of the top six ranked teams in District 1, and went through the fires of the Cumberland Valley, Bethlehem Liberty and Escape the Rock tournaments. The Hawks have done a good job of dirtying up their records, and only seven of them having winning records this season. Only Faith Christian Academy and Spring-Ford have had more bouts decided by decision than South, so the Hawks will feel plenty comfortable getting in some dogfights. South’s winning percentage from 172-pounds and up is just 35 percent, but Upper Perk is only .500 at those weights, so it will be tough sledding for the Indians to find points. Ben Godshall, Gabriel Tulone (114), Rozanski and Brandon Godshall (133) all have 21 wins or more, but they line up right in the teeth of South’s lineup.

Outlook – No one in District 1 has a better winning percentage as a team that Sun Valley, who has won 75.9 percent of its bouts. The Vanguards have outscored opponents 880-212 in dual meets and are tied with Kennett for the most wrestlers ranked in District 1-3A. Despite Sun Valley’s dominance, there will be a magnifying glass on the Vanguards, who haven’t won a district duals meet since 2009. A lack of big-match experience and challenging schedule are question marks, going forward for the Vanguards, but they have arguably the most-balanced lineup in this bracket and certainly have the talent to answer those questions on their own terms. The Titans are led by Whittington and Neill, who are a bit under the radar after not competing in the postseason last year. South has lost four straight duals, three against teams in district duals (Strath Haven, Pennsbury and Pennridge) and only by a combined 21 points.

Outlook – Just behind CR South in strength of schedule, Pennridge has put itself through the ringer the first month and a half, and has come out impressive. The Rams dropped a six-point dual to CR South, but beat Boyertown, Quakertown and Pennsbury, to go along with a strong tournament slate. Pennridge’s core is Coffin and Kuhns, who’ve been to states, and Martinelli, Hogan and Ryan Gallagher, who’ve been to regionals. Gallagher just made his season-debut last week and bolsters and already-tough lineup. If the dual starts in the lower weights, Pennridge has a good chance to build a big enough lead that the Panthers’ strength up top becomes irrelevant. Haven’s trio of Milligan, Crawford and Farabaugh are a combined 60-14 on the season, while the rest of the roster is 82-86.

Outlook – The Rams are fresh off winning the Pioneer Athletic Conference Championships, while the Pioneers claimed the team title at the Central League Championships, last Saturday. The two teams enter this tournament from different ends of the spectrum, with Spring-Ford as old reliable with five straight trips to the PIAA Duals and Conestoga as a talented newcomer with little on the resumé. The Rams win with their depth, manipulating lineups to get the best matchups and inserting “program kids” to keep scores close. The formula has the Rams in contention to keep their state streak going, and having the three Smiths is a nice way to start. Conestoga has the fourth-highest winning percentage as a team in District 1, but has only won 38 percent of matches determined by decision. That’s advantage-Rams, if things get tight, but ‘Stoga does have some firepower at the bottom of the lineup with Boye, McLellan, Allred and Bryce Beltrante (215).

Outlook: The Whippets will try to turn the clock back 15 years in hopes of a repeat from the 2008 district duals when they upset Boyertown, 37-26, as the 12th seed. The way these two teams are constructed, this dual could be a nail-biter or it could be a run-away. Both teams have given up the most pins (85) of teams in the bracket. Boyertown has pinned in 51 percent of their matches won, while West is at 52 percent. For the Bears to hold their seed, they’ll need to control the first half of the lineup, where their strength is. Heimbach and Sheridan can set the tone, but Boyertown needs Brody Coleman (114), Sonny Mash (121), Stankina and others to win potential swing matches. Along with Brayden Sigle, Chase Sigle (114) was a regional qualifier and Levi Richmond (121), Kevin Bernhard (133) and Jordan Barry (139) have the potential to give West a shot, with Hale and Mack favorites at the bottom of the lineup.

Outlook – With one of the biggest stables of high-end talent, Quakertown entered the season with high expectations. Losses to CR South and Pennridge in December and another to Boyertown knocked the Panthers off their pedestal, but they are in a position to redeem themselves at the right time. As additions and losses can swing teams’ fates this time of year, Quakertown welcomed back Gavin Carroll, a regional qualifier as a freshman, last week and that is a big deal for the Panthers. Quakertown now has Carroll, Gaj and Borzio in the middle of the lineup, in between studs, Ziegler and Lachman. The rest of the rest of the lineup has taken its lumps in a challenging schedule, but is likely more prepared and certainly hungrier should the Panthers get a chance at revenge against rival, Pennridge, in the quarterfinals. Pennsbury has six seniors in the lineup and is solid in a lot of places, but lacks the star power of Quakertown, though Shane McGurrin is 21-0 with some good wins in District 1 this season.

Outlook – Fully healthy, these two teams could very well have competed for a top-four finish in District 1. But that is not the case. Kennett lost Josh Kochersperger to an injury in the offseason, and Joey Wuchter did not wrestle, leaving some key holes in an otherwise dangerous lineup. Kennett is tied with Sun Valley for the most ranked wresters in District 1, and that octet would be a contender if there were only eight weights. But there are 13, and in the 86 bouts the non-ranked Blue Demons have wrestled, 57 were losses, and 42 by fall. Maiers missed last weekend’s CoalCracker tournament and Lengel was injured during it, but if they can make it back by Thursday, Kennett can be right in it. While Perk Valley is without Cole Euker, due to injury, it expects two-time state medalist Kelly Kakos to be back, after missing all season to this point. That would be a major boost for the Vikings, who have a star in Tancini and then can close out with Kakos and the Pascoe and Euker brothers.

Outlook – In most of the other matchups, you can see where things could go sideways for a team, and while that could still happen here, it looks like the 8/9 matchup should hold true to its seeding. Both teams are very solid, with strengths at opposite ends. Henderson appears to have the advantage in the light weights, up to 139, where Cortese and Karkoska may battle in a huge swing match. The Warriors would need to build a big lead with a hypothetical start 107, because OJR is going to score at the back end. Gautreau and the Bechtold brothers have won 83 combined matches and scored bonus in 63 of them. Henderson has the third-most pins in the field, but has also been pinned the third-most. The Wildcats have been pinned fifth-most, but have the eighth-most pins. This dual likely comes down to those almighty bonus points, and OJR is hoping a harder schedule will help stave off the upset attempt in a battle of Chester County.