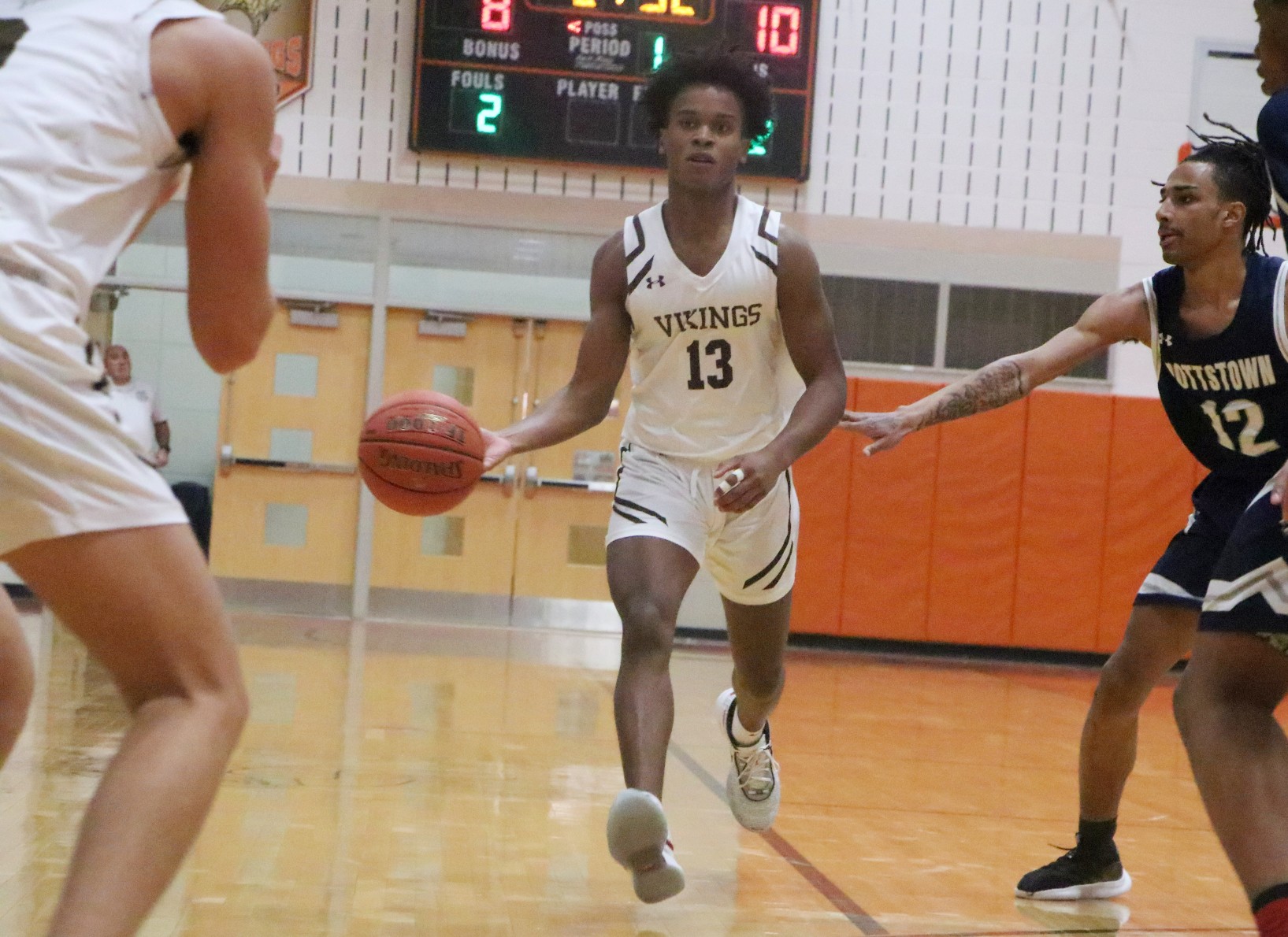 COLLEGEVILLE >> It was a split second. Not much time to react.

But almost enough for Julian Sadler.

Down two points with three seconds left in regulation against Pottstown, Kyle Shawaluk tied it up 64-64 with a mid-range jumper. On the ensuing inbound pass — one second left — Sadler made the interception, hooked around and got one last shot off.

The ball rimmed out, the buzzer blaring, but all was not lost. Overtime presented Sadler more time to excel and with eight of his 22 points in the extra period, the junior guard still aided Perkiomen Valley in a Pioneer Athletic Conference crossover win, 73-69 on Thursday.

“I had a steal, we almost won. If I had made that it would’ve been cool,” Sadler said.

Kyle Shawaluk ties it 64-64 just before the buzzer.

This game has been an absolute THRILL ride. pic.twitter.com/zfV2BeBRTD

The 6-foot-2, 165-pound guard has still been making plenty. Since opening night of the 2022-23 PIAA basketball season, Sadler has remained the leading scorer in the PAC and is averaging 21.3 points per game.

Sadler is also the only PAC player averaging 20-plus after finishing his sophomore season at 10.7 ppg.

For his efforts this winter, he’s right in the mix of Prep Hoops Pennsylvania’s PAC Player of the Year watch list and has been a consistent playmaker on the offensive end of the floor each week.

Last season, Sadler was a Mercury All-Area honorable mention. This winter, Sadler has jumped out with an explosive start to his upperclassmen years.

“What’s been really fun to watch is the progression from knowing him as an eighth-grader to a ninth-grader, nine to 10 and 11, and that every year we challenge him to come back differently, add another tool to your arsenal,” Perkiomen Valley coach Michael Poysden said.

The answer — a more dynamic shooter. Sadler was always a scorer at the rim. But through the offseason and during AAU, the Prim3 Tim3 guard has worked relentlessly on his outside shooting.

Currently, Sadler has 38 buckets from 3-point range, sixth-most in the PAC.

“He really locked himself in the gym and developed that outside shot,” Poysden said.

The court IQ has also been dialed up. The balance of sharing the ball, attacking, being patient and waiting for the right spots to open up and be seized upon have all made for a more proficient version of Sadler in his junior season.

And with that, the pieces around him have been adding to bulkier box scores. Mason Thear, Luke Hansen and Shawaluk have been hitting double-digit scoring figures as the Vikings have climbed up to the No. 8 spot in the District 1 Class 6A rankings.

While it may not be the main approach necessarily, Sadler still gets his. The junior is still sitting on a PAC-high 384 points while the rest of the cast is heating up in January.

“I think my game has definitely elevated,” Sadler said. “My teammates get me in the right spots, hit me on cuts and find me. I always let the ball come back to me, I’m not gonna force anything.”

Perkiomen Valley still has its work cut out for it. An 11-6 overall record isn’t bad, but the Vikings have just one divisional win and sit in fifth place of the Liberty standings.

The Vikings still have divisional games against Boyertown, Norristown, Owen J. Roberts and Spring-Ford on tap to try and sneak into the PAC tournament. Perkiomen Valley hasn’t reached the PAC championship since the 2018-19 season and hasn’t won the conference title since 2016-17.

“Every year it’s a work in progress. All we’re hoping to do is our best,” Poysden said. “We want it to still be in front of us. But it’s definitely cool to watch other guys hit that double-digit mark, multiple guys in multiple games. That’s how this works.”

Loaded with more upperclassmen talent in 6-foot-3 forwards Morgan McKinney, Shane Nelson and Hadi Iskandarani, as well as a primary ball handler in senior guard JT Brady, the Vikings are poised to attempt a deeper run than their second-round exit in the District 1 tournament last year.

And with Sadler spearheading the front, Perkiomen Valley might be a contender in the 6A field if it gains ground in the coming weeks.

“He’s a relentless competitor, it’s certainly fun to watch him play,” Poysden said on Sadler. “We’re excited he has a lot of games left.”