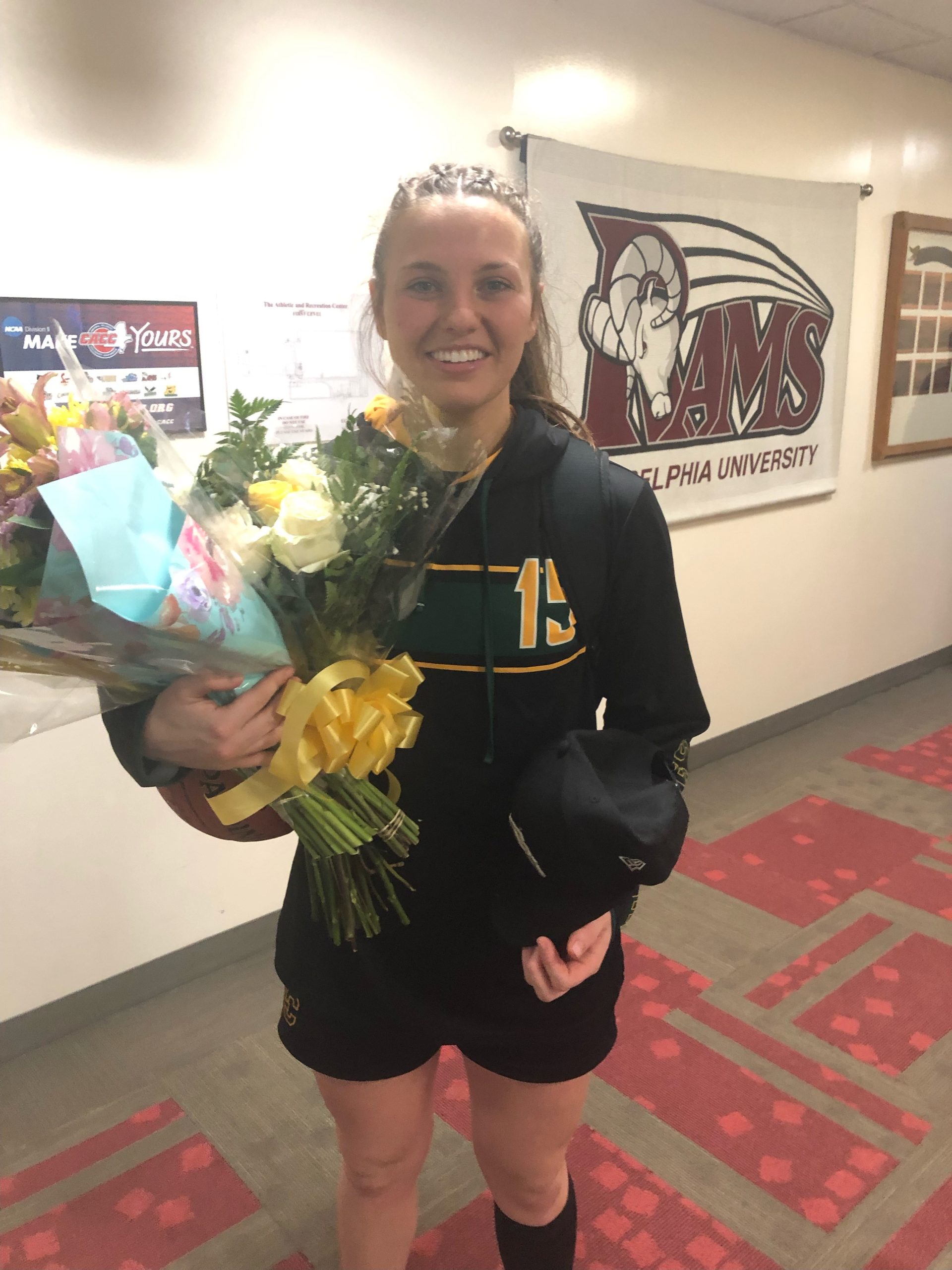 As of Sunday, that’s exactly where Gabby Casey is in the hierarchy of any person to ever score a basketball playing for Lansdale Catholic. Just a few weeks after becoming the all-time top scorer for the Crusaders’ girls’ program, the senior entered Sunday’s high-profile match-up against Penn Chater at the Play-By-Play Maggie Lucas Classic at Jefferson needing just 16 points to become the true undisputed No. 1.

With a third quarter three, Casey ascended to rarefied air, then helped LC finish off an impressive 61-33 win over the top team in the Inter-Ac with a 25-point effort.

“I was thinking about it all game, I was trying to let it come to me but I was feeling a little bit of pressure,” Casey said. “The three was great, it probably made the moment a little better, I didn’t know that was the shot that put me over but it definitely felt great.”

When Casey arrived at LC, the three-point shot was not her forte and it’s one of the things she’s worked most diligently to add, going from a sub-10 percent perimeter shooter as a freshman to a near-40 percent shooter now. A linear focus and determination to get better helped Casey get not only to this point, but earn a scholarship to play at St. Joe’s next year and it seemed fitting that particular shot would be the record-breaker.

Casey broke Meghan O’Brien’s record of 1,259 points with a fastbreak layup on Jan. 10 to become LC’s leading girls’ scorer and it was just a matter of time before she moved in on Mike McGowan’s 1,347 career points for the all-time lead. A first team all-state and first team All-PCL selection last season as a junior, Casey was an integral part of LC reaching its first-ever PIAA title, ultimately falling to Catholic League foe Archbishop Wood in Hershey.

The senior, who hails from Quakertown, has spoken of wanting to leave a legacy at LC. To her, the ultimate prize is the state title and as one of three remaining unbeaten teams in the Catholic League, the Crusaders are a definite contender to reach the Palestra and vie for a PCL title as well.

“This is the first step, obviously, we’re all trying for the state title,” Casey said. “Leaving a mark is what I wanted to do at LC, so I’m really grateful for that. I can’t wait for that moment but I’m also hoping all this can prevail at the next level and I’m going to keep working.

“I’ll just keep racking up the points, I guess, just to keep going so nobody can break it after me. That’s my personal goal, I guess, to make it untouchable.”

The 5-foot-10 wing can score from pretty much every level but it’s her determined drives to the rim that have parlayed in quite a large number of her now 1,356 career tallies, the same determination that’s helped turn LC from a 2-11 team as a sophomore to group thinking state championship.

“It’s the best feeling ever to see the hard work is paying off and to have something from me left at LC,” Casey said. “Mentally, I’m always staying in it and focusing that shot’s going to go in and most of the time, it works. Also, the trust my teammates have in me only makes me more confident that they trust me with the ball.”

Sunday’s contest brought more than flowers, hugs and a game ball to have commemorated. It was a chance for validation, the Crusaders a late add to Sunday’s all-day showcase after schedule shuffling and getting a prime matchup to  in their view, silence some naysayers trying to poke holes in their schedule.

“We wanted to play Penn Charter,” Casey said. “People kept saying our schedule was weak, so we were ready for it and I think it showed. We came out from the jump and took it to them and even in the second half, we turned it up a notch.”

On an individual level, playing the Quakers presented a one-time-only opportunity for Casey as she would go up against her Philly Belles AAU teammate of two years and future St. Joe’s teammate in Penn Charter Aleah Snead. Casey and Snead, who recently scored her 1,000th point, became fast friends in AAU and the two future Hawks got a good-luck text from their future head coach Cindy Griffin on Sunday morning.

Casey admitted it was very different lining up across from Snead to play but as soon as a the game was over, Snead and her family were among the first to give her some congratulatory hugs for her accomplishment.

“In the captain’s huddle, we weren’t really looking at each other,” Casey said with a laugh. “When it was over, she came right over and we hugged. She’s a great person, I’m so excited for St. Joe’s and really looking forward to rooming with her and getting even closer with her.

“Her family’s amazing, it definitely doesn’t fall far from the tree, she’s an amazing person and such a great player.”

Snead and Casey were both newcomers to their AAU team – which also included Hannah Griffin, their future coach’s daughter – at the same time so they immediately bonded as “the new girls.” It was Snead who committed to St. Joe’s first and Casey said that was a major reason she opted to choose Hawk Hill over several other Division I offers with more coming in by the week last spring.

“Aleah drives to the basket really well and she’ll be able to find me, the kick-out to the corner, that’s what we did a lot this last AAU season, she’s so fast, has a really quick first step and her defense is amazing,” Casey said. “Both our skill sets, I think it’s going to be tough to match.”

Her AAU team had a strong bond and it’s the same with the Crusaders. After Sunday’s game, senior Jaida Helm grabbed Casey for a mock interview in the hallway while one of her teammates tried to crown her with the snap-back hat she was awarded as LC’s player of the game. Like it was last year, LC’s finishing slate to PCL play is brutal but it’s what the Crusaders have been working for.

“The vibe, we’re all open and welcoming and when you love basketball so much, you just click,” Casey said. “I think basketball people are so easy to talk to and get along with, plus we all have one goal in mind so that’s what really pushes us to become closer in everything.

“It starts in practice, going hard every day and really challenging each other. We’ve really been doing that these past couple weeks and I think it’s been showing on the court, everybody wants to be here and wants to win.”

Like her 1,000th point, which Casey recorded in the second round of states last year, the senior wasn’t able to attain her latest milestone in her home gym. However, she did break the girls’ record there and with the Crusaders slated to celebrate Senior Night in Tuesday’s PCL clash with St. Hubert, the program will make sure she gets her due in front of the home crowd.

Sunday, holding a couple bouquets of flowers, the game ball and hat, all Casey really wanted was to get some dinner. Reminded that Dalessandro’s Steaks was a few minutes up the road, her eyes lit up.

“Hopefully I can get some good food after this, hit somewhere on the way home,” Casey said. “That’s my dad’s favorite place, I’ll have to say something.”