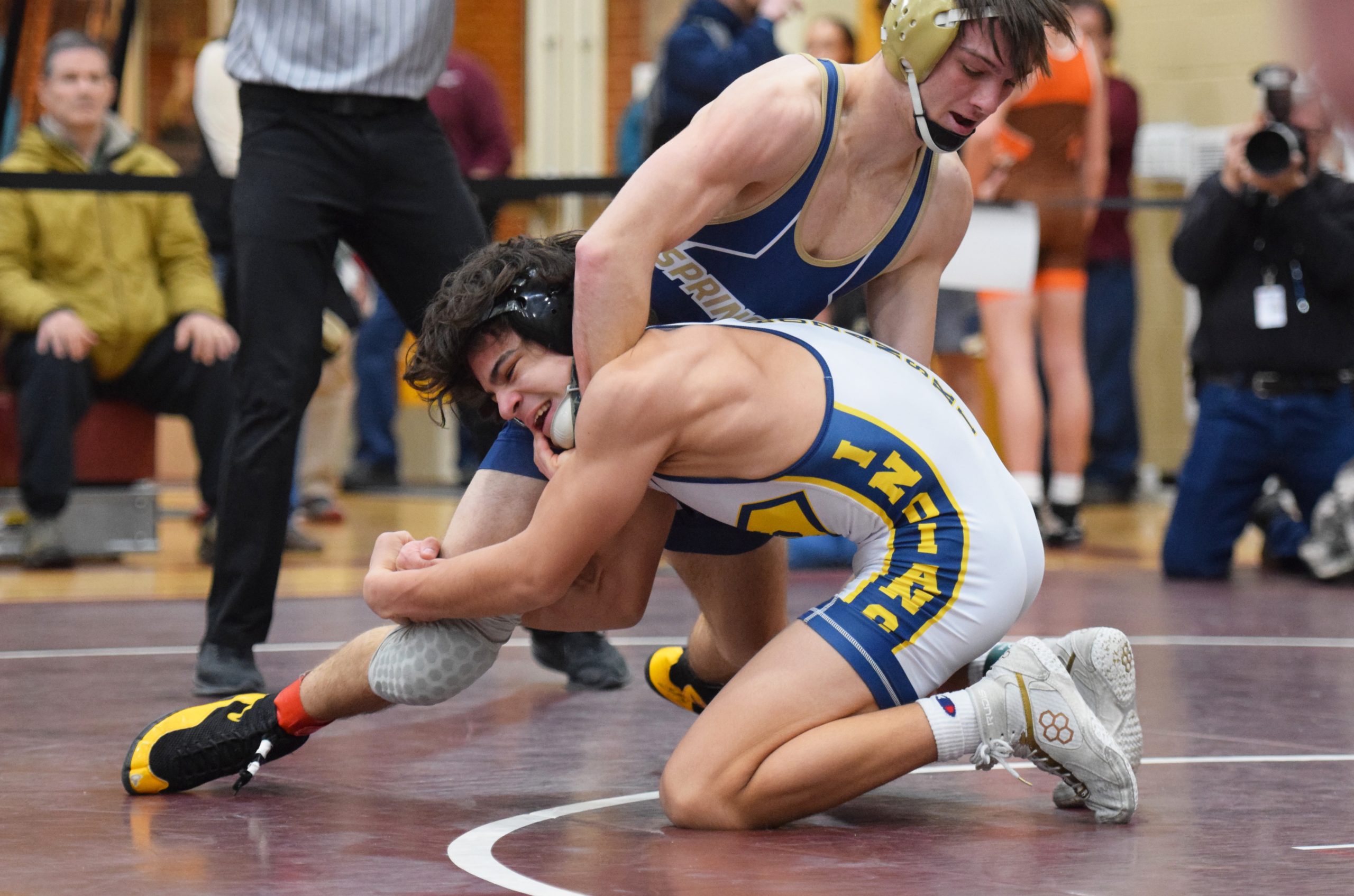 LOWER POTTSGROVE >> The Pioneer Athletic Conference Wrestling Championships returned Saturday, back at Pottsgrove High School the third week of January. It was the first year-to-year continuity for the tournament since 2018, back when it was a precursor to the individual postseason in mid-February.

The tournament repeat was a welcome sight … as long as it wasn’t an exact replica.

Branden Rozanski was one of nine returning second-place finishers from a year before, every one wishing to reach that top spot on the podium.

The Upper Perkiomen junior was one of five to achieve the feat, Rozanski scoring a takedown on Spring-Ford’s Quinn Smith in the final second of the third period for a 5-3 decision and the 127-pound championship in the afternoon’s most dramatic final.

“It means a lot to me,” said Rozanski. ”Last year I was here and took second. I had a big semifinal win, but I didn’t get the end result. It was definitely a bitter taste because I want to come out here and win. This year I was coming to take first.”

Karkoska and Gautreau were among five Owen J. Roberts champions – additionally Skylur Davidheiser (145), Dean Bechtold (189) and Dillon Bechtold (215) took first – but the depth of Spring-Ford allowed the Rams to claim the team championship with 233.5 points, followed by OJR (215) and Boyertown (211). Spring-Ford did it while having only one champion, 114-pound winner Cole Smith, who won his third PAC title.

Rozanski, a state qualifier in 2022, was topped in last year’s 120-pound final by Boyertown junior Gavin Sheridan, who became a repeat champ Saturday with a technical fall of Upper Perkiomen’s Brandon Godshall in the final at 133.

Rozanski (21-4) had to wrestle from behind against Smith, the PIAA qualifier who last week joined the 100-win club, after giving up a first-period takedown. He worked back to 3-3 then, in the closing seconds, seized the moment.

“I had a game plan but as you could tell I got taken down first period,” Rozanski said. “But I didn’t let that shake me. I knew my offense was there, I just had to keep pushing the pace and it paid off.

“There was a second left. I got in, but he had pretty nice defense. I just kept going and going and slipped my head out and got around him with one second left and then time ran out.”

“It feels good, my first PAC championship,” Heimbach said after his second-period pin of Upper Perk’s Zane Saeger. “Three pins today so not that tough of a day but overall I felt like I wrestled well.

“I knew it was my last chance to win a PAC championship and I wanted to take full advantage of it and seize the opportunity.”

Heimbach reached states a year ago is off to a 25-7 start this year and is in pursuit of his 100th win (currently on 87). The Penn College of Technology commit has felt his name carry more weight this year as a returning state qualifier.

“I think there’s more name recognition, my name is out there more and kids are more timid against me. I know that I’m better and I just need to get to my stuff and I’ll win those matches.”

For the Wildcats’ Karkoska, a PAC title is icing on the cake. He’s just thankful to be competing after enduring multiple concussions that have stunted his scholastic career.

“Even going back to freshman year, it’s definitely satisfying,” said Karkoska (21-8). “A lot of things out of my control that I couldn’t overcome. But I’m back this year and looking to Hershey now.”

In the final at 139, Karkoska scored a first-period pin of Boyertown’s Carter Stouch, who was one of the day’s unsung bright spots after the freshman reached the final despite being a late entrant in the field when sophomore teammate Shane Stankina dropped out.

Perkiomen Valley’s Gavin Pascoe has his arm raised as champion at 160 Saturday at the PAC Championships. (Austin Hertzog – MNG)

Perkiomen Valley seniors Gavin and Carson Pascoe had a different sort of motivation than others: neither was able to compete at PACs last year due to injuries. Carson missed out with a collarbone injury while Gavin had suffered a season-ending knee injury two days ahead of PACs last year.

They stuck together again Saturday by going to back-to-back in the 160- and 172-pound finals, Gavin winning by forfeit while Carson majored Spring-Ford freshman Mason Richards 19-7. They were joined atop the podium by PV freshman Max Tancini, the 107-pound champion.

“It felt awesome being able to prove what I’ve been working for,” said Gavin Pascoe (21-6). “In the beginning of the season I had some bumps in the road, but now I’m getting the hang of it. I hurt my knee last year so it was getting the motions back. But I feel good now.”

Whether it was a single step on the podium or stepping from sideline to top spot, you’ll get no complaints from any newly-crowned champion.

“We’re brothers, so we do everything together. You never want to see one competing, one not. Last year we both couldn’t compete,” said Carson Pascoe (25-3). “This year, both on the mat, both champs. There’s nothing better than that.”