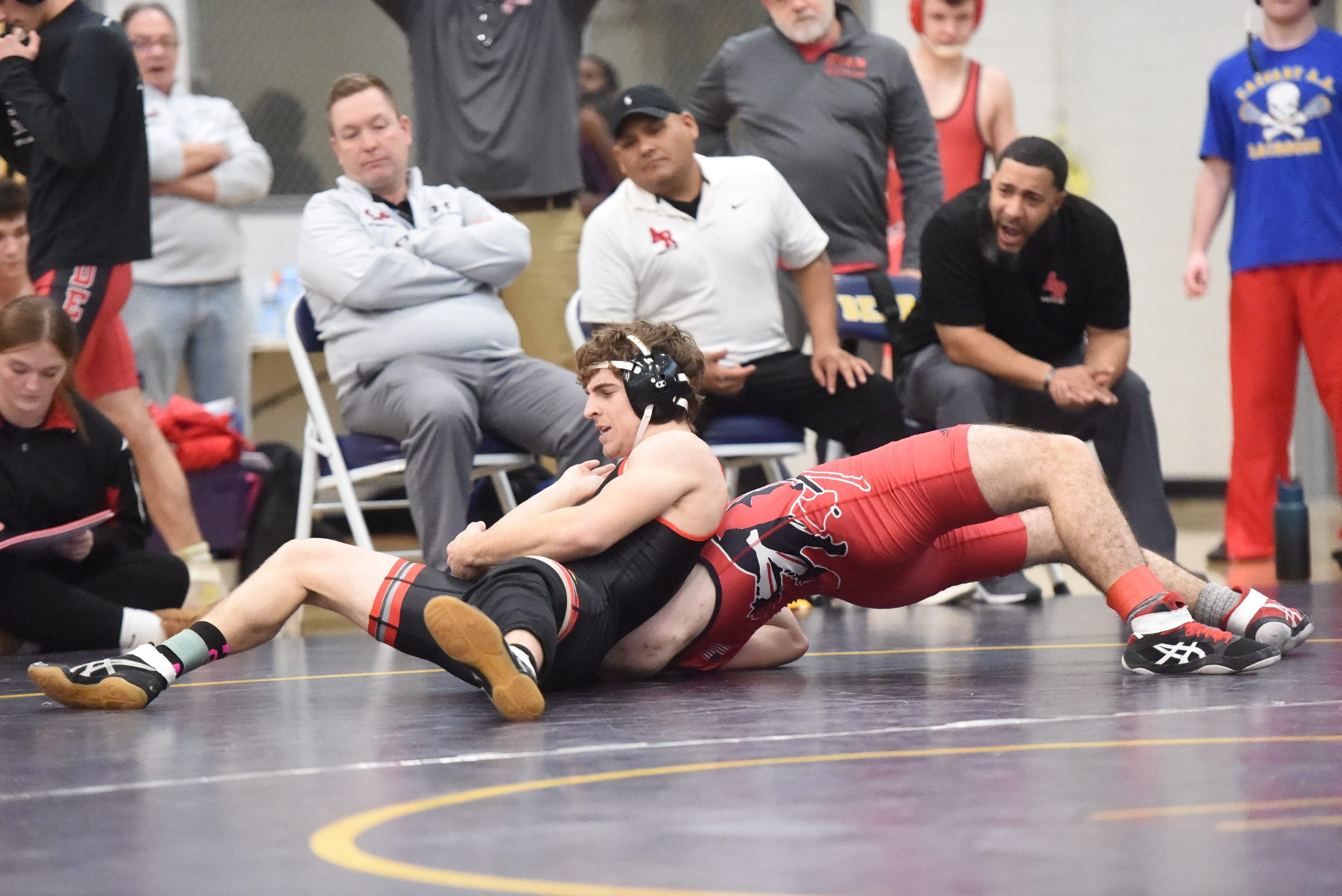 Upper Dublin's Austin Pendleton works for a pin against Anthony Toczydlowski during their 152-pound match in the final of the Golden Bear Duals on Saturday, Jan. 21, 2023 at Upper Moreland. (Mike Cabrey/MediaNews Group)

UPPER MORELAND >> Austin Pendleton got into a situation he did not want to be in late in the first period of his 152-pound match against Archbishop Ryan’s Anthon Toczydlowski.

“I had a cradle on the guy and so when I rolled him over he rolled through it,” the Upper Dublin junior said. “And I looked up at the clock, I had probably eight seconds, 10 seconds left, I said ‘I have this cradle right now, he doesn’t get the reversal right now cause I have it and he’s not getting back points.”

After getting through that unscathed, Pendleton made sure there were not going to be any more trouble spots, claiming a pin 37 seconds into the second period.

“I made my one mistake for the match, now it’s going to be smart for the rest,” he said.

Pendleton’s fall was the second of six for the Cardinals in the final of the Golden Bear Duals Saturday at Upper Moreland, Upper Dublin holding off Ryan before winning the last three matches to pull away for a 43-27 victory over the Raiders.

“We knew what we had with Ryan, they’re a solid team,” UD coach Dave Jones said. “We matched up well against ‘em. I wanted to get Truman or Upper Moreland but that didn’t happen. So I think we wrestled well. Our expectation was to come in, wrestle well, not give up too many pins and the kids did that, they did a real nice job.”

The Cardinals completed a 4-0 day with a 72-6 win over Penn Wood to tie the school record for victories as they improved to 19-2. Upper Dublin rolled past William Tennent 61-6 in the quarterfinals then defeated Father Judge 54-12 in the semifinals. UD can earn win No. 20 Wednesday at Plymouth Whitemarsh.

“We have PW Wednesday which is a tough, local match for us and then Abington, also a border match for us the following week,” Jones said. “And then we’re done our duals and of course we have the league tournament on the 15th which will be a precursor to districts. So, yeah, we’re looking forward to it.”

Pendleton earned his 50th career victory by pinning Judge’s Michael Eibel in 1:19 at 152 and won all four of his matches by fall Saturday to put his record at 25-1.

“So far I’m feeling really well and I’m hoping to get a lot more competition which I’ve been getting,” Pendleton said. “And I’m happy to get that because it prepares me for districts, which I haven’t wrestled (at) my whole high school career. So it’ll be interesting how we go into the postseason but there’s a possibility we get into district duals and I’ll get some competition there too.”

As a sophomore, Pendleton wrestled just five times before suffering an ACL injury that also caused him to miss the 2021-2022 season.

Back on the mat, his only loss so far this year came to Neshaminy’s Dan Hansbury by pin at Hatboro-Horsham’s Ralph Wetzel Classic in December. Since then, Pendleton has won 18 straight – the last eight via fall.

“My wrestling career has been a little bit tanked but it’s all right,” said Pendleton, who kicked for UD’s football team and also plays on the school’s baseball team. “I’m just happy to be out here with the team and we’re doing well as a team and I like seeing that.”

In the Golden Bear final against Archbishop Ryan – which began at 127 – Upper Dublin took the lead for good on Dan Gorman’s pin in 48 seconds at 139 put the Cards up 10-6. Alex Pleffer’s 7-2 decision at 145 pulled Ryan to within 10-9 but Pendleton followed with his pin in 2:37 for a seven-point UD advantage.

“He defended it, it was just a little throw, and then once I got him on the mat I was just trying to end the match there,” Pendleton said.

Upper Moreland’s Jonathon Hester looks for a pin on Cheltenham’s Peter Phan during their 145-pound match at the Golden Bear Duals on Saturday, Jan. 21, 2023 at Upper Moreland. (Mike Cabrey/MediaNews Group)

The Cardinals, however, took control as the dual flipped to the lightweights for its final three matches. At 107, Jake Evans earned a pin in 42 seconds while Zach Gallagher clinched the victory with a 6-1 decision that gave UD a 37-27 edge. Caden Cerminaro’s pin in 2:57 at 121 made it a 43-27 win.

“The little guys are doing really well this year and they’ve been carrying it,” Jones said. “And then of course our middle weights are solid.”