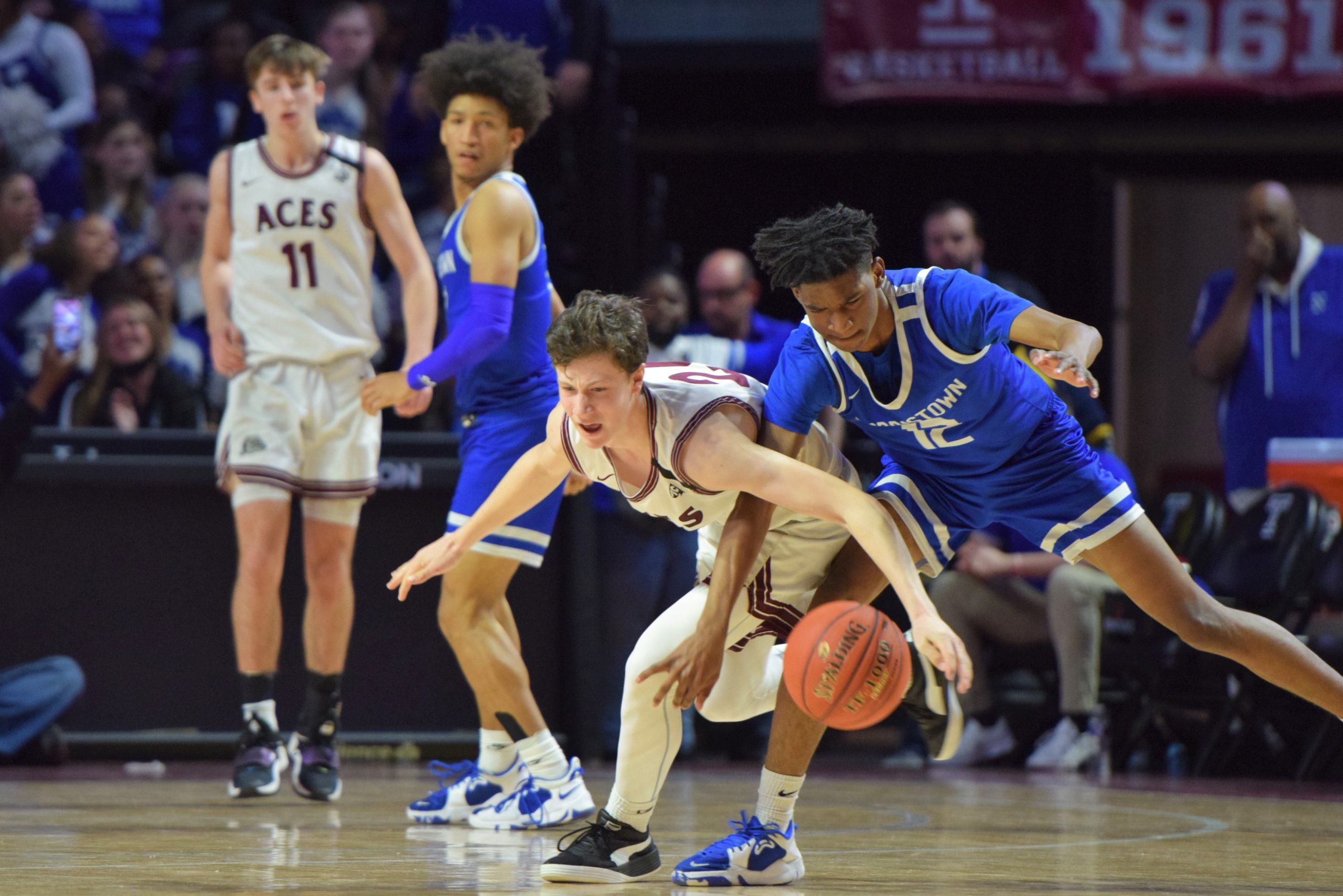 WEST GOSHEN >> Lower Merion showed some championship meddle down the stretch during a Saturday matinee, and West Chester East proved it could hang with one of the big-boys of District 1 boys basketball.

In an intriguing non-league clash between teams that have some serious postseason aspirations, it was the visiting Aces – down a pair of key contributors in the fourth quarter – that came up big in the late stages to survive 55-49 against the upset-minded Vikings.

“We are very resilient – we have a next-man-up mentality,” said Lower Merion head coach Gregg Downer.

“There are going to be some nightmares for me tonight,” added East mentor Tom Durant. “But our kids played hard, and we have to learn to get better.”

The top team in the District 1 6A Power Rankings, the Aces improve to 15-1 overall. East – number three in the district’s 5A rankings – drops to 13-5.

“This was a state tournament-level experience in an away gym,” Downer said. “It reminded me a lot of a state playoff game, where you have to play through the whistles, play in a foreign gym and you have to answer the bell. And we did.”

Trailing much of the way, Lower Merion staged a late 16-5 rally to turn a three-point deficit with 4:14 on the clock, into an eight-point cushion with 20.2 to go. And the Aces did it all without senior guards John Mobley and Sam Wright. Mobley missed the game with a left foot injury and Wright fouled out late in the third period.

“John (Mobley) is a core member of our team, so it was a challenge for us to see if we can go from good to great,” said senior guard Teddy Pendergrass III. “It didn’t frighten us that we were missing some people because we trust each other to go out there and contribute. There is a lot of security there.”

Down 35-31 through three quarters, Pendergrass kick-started the comeback with back-to-back 3-pointers. He then added four more points the rest of the way as Lower Merion outscored East 24-14 in the final eight minutes.

“When the game gets difficult, we know to keep our composure because we’ve been in a lot of situations like that,” said Pendergrass, who scored 13. “We respect everybody, but we don’t fear anybody.”

“We had the dogfight in us – we fought the whole game,” Durant pointed out. “But it was the little things that got us. You have to optimize your chances and limit the mistakes. Hopefully we can correct some of that.

“We didn’t take advantage of a couple 3-on-2 and 2-on-1 opportunities late. And (Lower Merion’s) second-best player fouled out of the game with a minute to go in the third – you have to take advantage of that.”

Wright scored six of his 11 points in the third before fouling out with 1:25 on the clock. He buried two 3-pointers in that stretch as the Aces gradually started hitting from the perimeter against the Vikings’ zone defense.

“I feel like we adapted to it eventually,” Pendergrass said. “We weren’t hitting shots in the first half, but the second half was like a new game.”

Few have dared to go straight zone against the sharp-shooting Aces until Saturday. And it worked in the opening half. Lower Merion hit on 5 of 14 shots in the opening period, and it got even worse in the second.

With sophomore K.J. Cochran scoring seven of his 14 points, the Vikings ended the first half with a 10-3 flurry and took a 26-21 lead into the intermission. Overall, seniors Jack Kushner and Jose Ramos chipped in 14 and 13 points, respectively, but the rest of the roster managed just eight points, and only two in the second half.

“We cracked down (defensively) a little bit in the fourth quarter, and it worked for us,” Downer said. “We were worried about Cochran getting loose – he is a very dynamic three-level scorer.

“(Defensively,) we don’t see a lot of zone and we were cold from 3-point range in the first half. But the ebb and flow of the 3-ball is if you are cold, you are going to start making some, and we had seven go down in the second half.”

It was the final non-league contest for both. The Aces went 6-0. West Chester East ends the regular season with four Ches-Mont National contests and currently sits in a three-way tie at the top of the standings with Downingtown West and Coatesville.

“We ventured out and played (non-league) teams like Lower Merion, Abington and Plymouth Whitemarsh – teams that are perennial powers, and we need to play teams like this to get better,” Durant said.