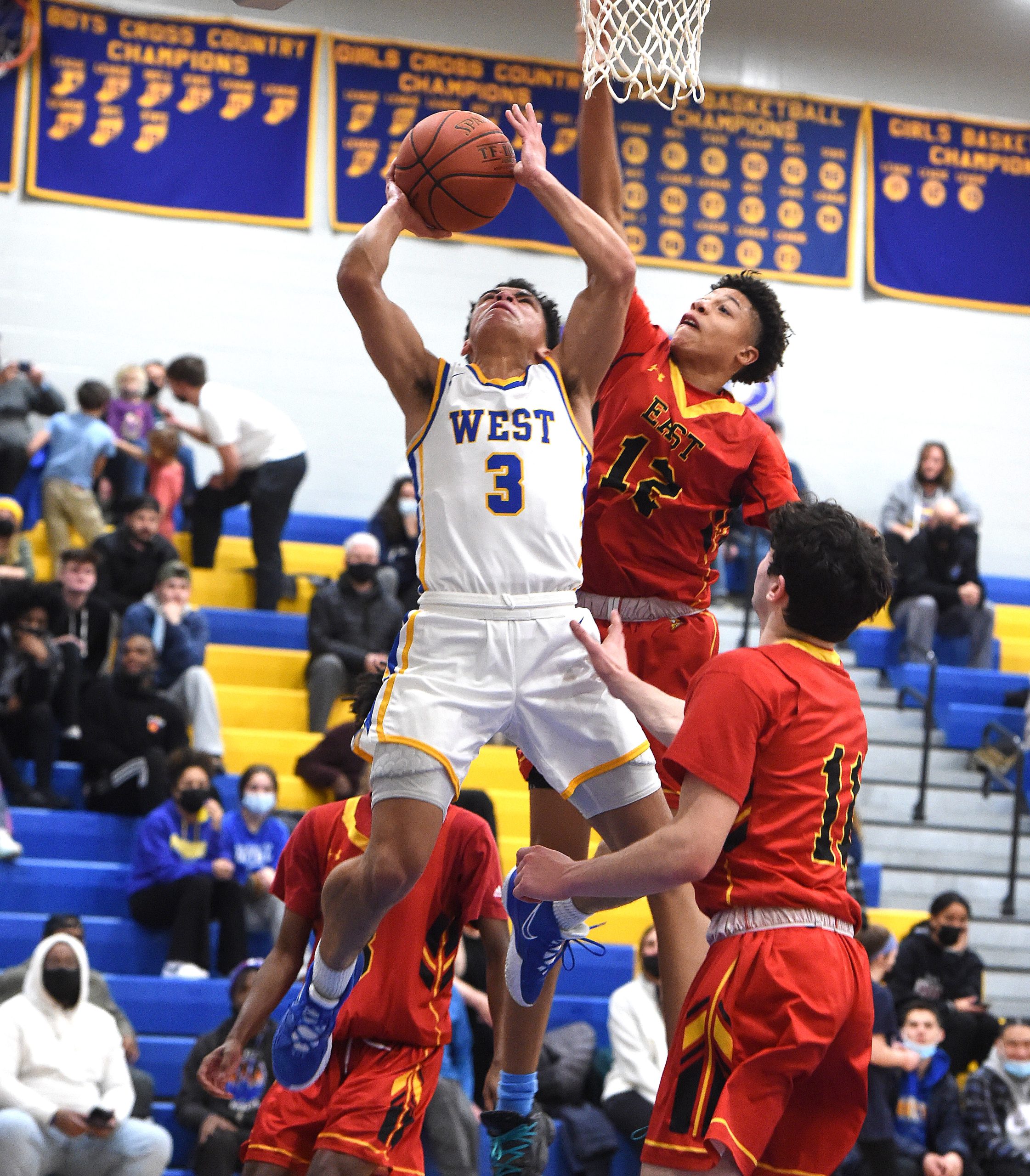 Downingtown West (13-4) led from start to finish and the host Whippets shot a white hot 29 for 55 from the field and forced 12 West Chester Rustin (7-9) turnovers, six in the key third period when the Whippets took control of the game, outscoring the Golden Knights 25-7 and taking a 57-33 lead after three periods.

Dylan Blair led the Whippets with 19 points while Jake Lasher added 10 points and Alex Neuhas knocked down 13 points, including three three-balls. Kelly Bell had eight points to go along with seven rebounds in a little over one half of action.

“It was a real tough loss the other night to Coatesville,” Bell said. “But we, as a team, have put that loss in the past and we are just focusing on the games ahead of us. Today, I was looking to score a little more than usual and the game plan was to go inside to our big guys and I had some opportunities.

“We showed a lot of energy today and when we do that good things happen. We have to get ready to play a real good Radnor team tomorrow and it is just another tough team for us. I think our tough nonleague schedule helps us as players and as a team.”

The Whippets led a 32-26 lead at halftime as Blair drained 14 of his game high 19 points in the opening half. But right from the outset of the third period the Whippets took control of the game as they showed more energy that the Golden Knights in the third period.

Neuhas started the 9-0 run by hitting on a corner three-ball. Then, after a Golden Knights turnover, Joey Suarez scored off the turnover in tight and it was a 37-26 Whippets lead.

Rustin came down the floor and turned the ball over again which led to a Blair drive to the hoop and it was suddenly a 38-29 Whippets advantage. Suarez drained a long three-ball and it was a 41-29 Whippets lead and Rustin was reeling.

Downingtown West kept up the heat for the entire period as the Golden Knights had trouble with the Whippets trapping defense.

The Golden Knights shot just two for 12 in the third period and scored only seven points for the entire period.

The Whippets, holding a big lead, came out in the fourth period and built on their advantage with three quick baskets by Jake Lasher.

When the score reached 64-35 in favor of the Whippets with a little over five minutes to play in the fourth period, West coach Stu Ross cleared his bench and the Whippets reserves saw valuable game time.

“Part of our plan was to go inside and outside today,” Ross said. “We wanted to open things up for our guards today. and it was nice to see Alex Neuhas knock some shots down. He has been working very hard in practice. We are going to need everybody to contribute down the stretch and guys have to be ready.

“I thought we did a nice job today against a good, well coached team in Rustin. We have to put that Coatesville loss in the rear view mirror and get ready for a very tough Radnor team.”