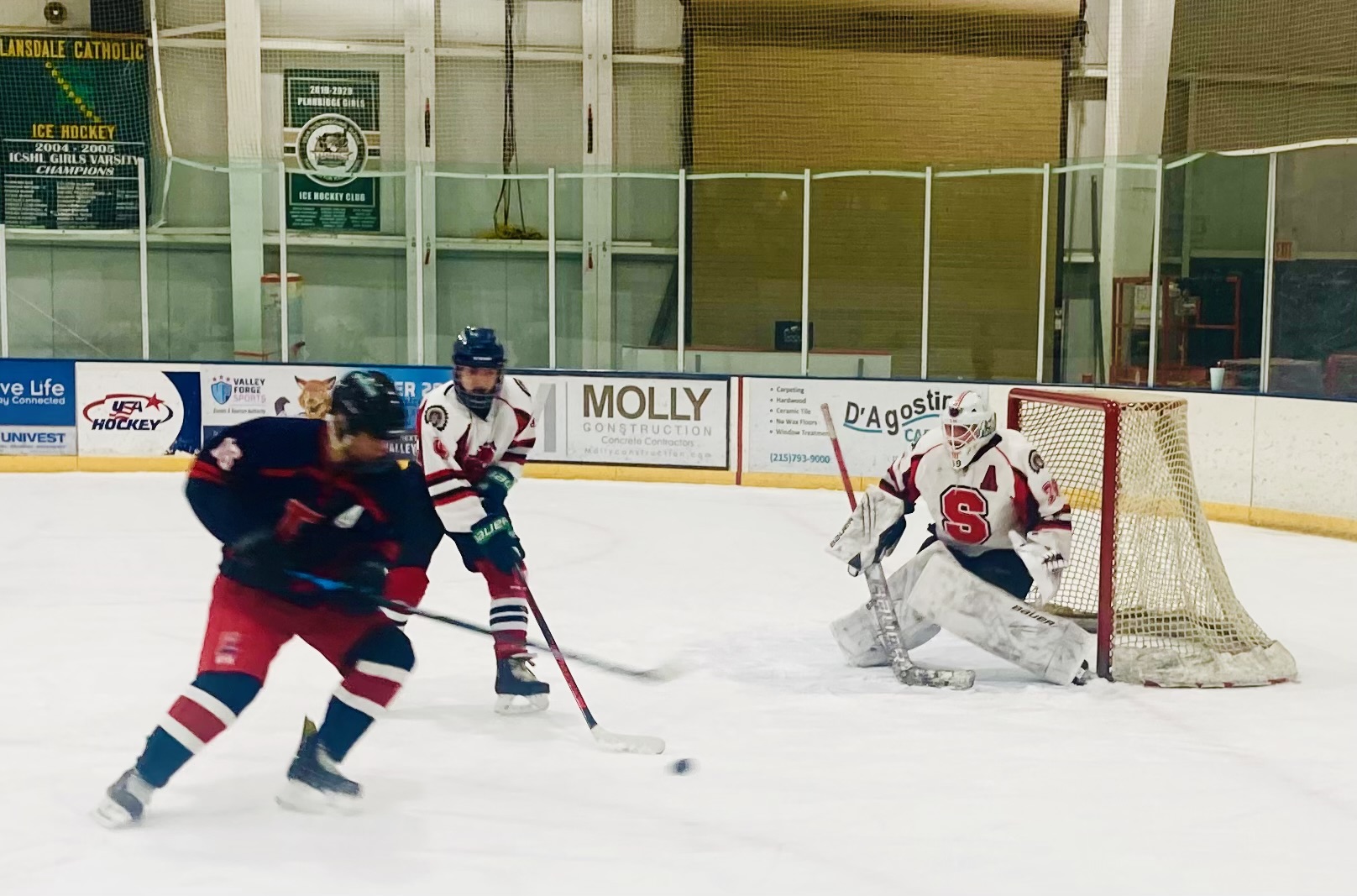 CB East turns up the pressure against Souderton, with Big Red keeper Noah Connor on guard during their game on Thursday, Jan. 19, 2023. (Kev Hunter/MediaNews Group)

HATFIELD TWP. >> Central Bucks East killed off penalties with a passion and took control of a tense battle with Souderton, skating away to a 6-3 victory at Hatfield Ice Thursday night.

“We had a great time,” said a happy coach, Jeff Mitchell. “It got off to a little bit of a slow start but for the most part, the guys had great penalty kills. All of the penalty kills late in the second period and in the third were just stellar. (Souderton) wasn’t getting any shots and didn’t have any presence in our zone. We were just clearing the puck and it really came together in that second half of the game.

“We hunkered down for sure,” Mitchell said. “(Souderton) has a young team so you have to put the pressure on.”

CB East goalie Matt Mangiacapre skates back to the net during the contest with Souderton. (Kev Hunter/MediaNews Group)

The victory moves the Patriots to 3-1-1 in the National, with a game against Neshaminy slated for next Friday at Bucks County Ice at 7:20 p.m. Souderton is now 2-5 on the season and will face CB West Wednesday at 7:20 p.m. at Hatfield Ice.

“I was proud of the boys, how they were able to stand back up on their feet and stay in front and take care of business,” Mitchell said. “This is a good start, a step in the right direction.”

CB East goalie Matt Mangiacapre goes down to make a save against Souderton. (Kev Hunter/MediaNews Group)

CB East broke a 3-3 tie with a goal by Corey Kosick midway through the second period. The Pats allowed Big Red few opportunities during a crucial stretch and strengthened their lead to 5-3 on a goal by Carter Keiser with 8 minutes, 8 seconds left to play.

Kosick’s second tally in the final minute capped the scoring.

“It feels really good. They had a lot of momentum starting out so I’m glad we could overcome that and put some goals in,” said the Pats’ Stephen DiRugeris, who had a goal and two assists in the victory.

Liam O’Neill, who had a hat trick for Big Red, opening the scoring with 3:30 left in the first. DiRugeris provided the equalizer for the Patriots a minute later.

East built a 3-1 edge on goals by Keiser and Gavin Widmer but then Souderton came storming back with consecutive tallies by O’Neill.

However, East controlled things the rest of the way.

CB East and Souderton face off during their contest. (Kev Hunter/MediaNews Group)

“We started slowing it down a bit with our defense. (Goalie Matt Mangiacapre) played great and we had some great defending out there that really allowed the offense to play well,” said DiRugeris. “This is a great one to get under our belts.”