Boys Basketball: Chichester’s gym empties before Chester leaves it all on floor in OT win 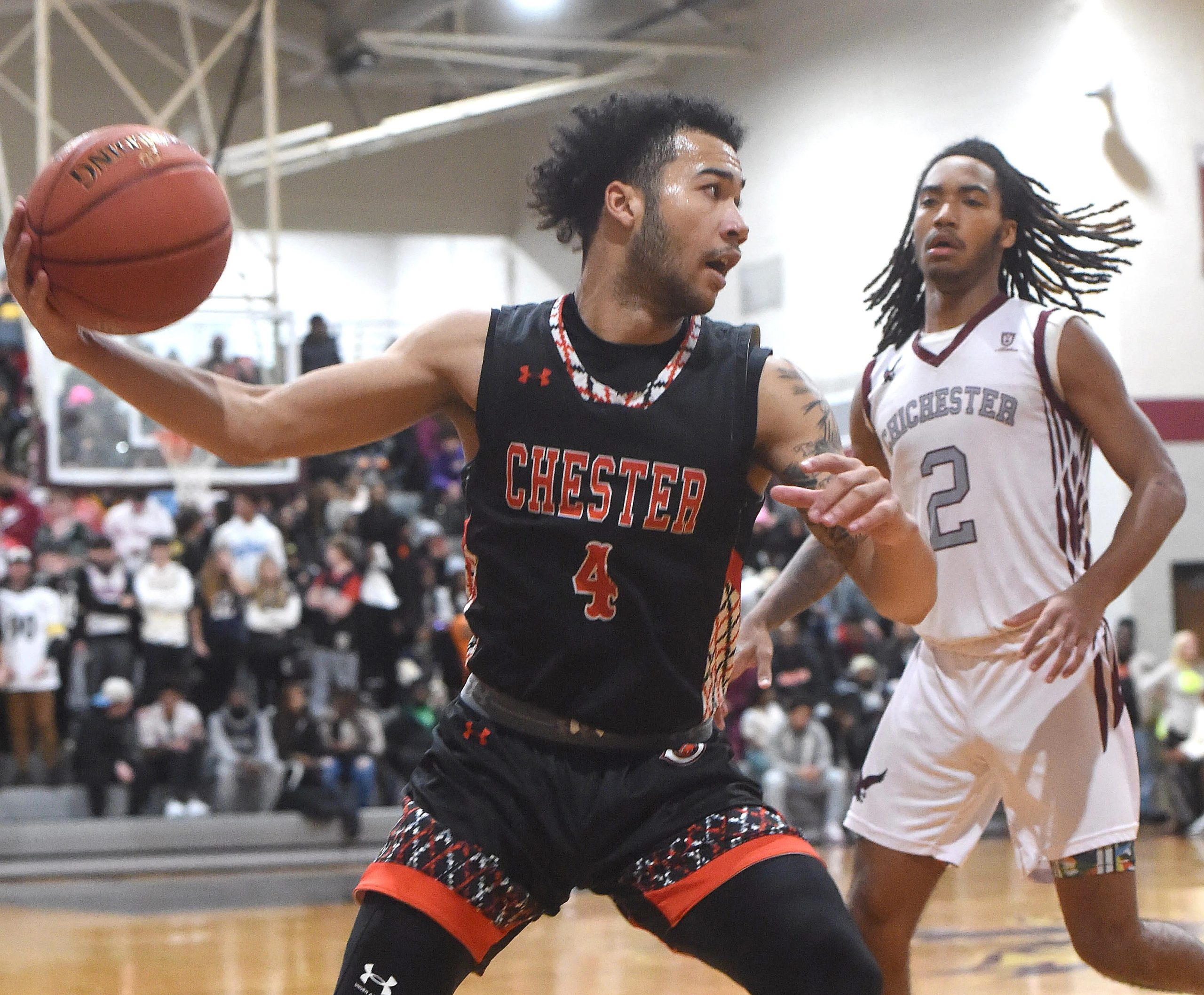 Chester's Terrance Cobb looks for a pass in the second half against Chichester. (PETE BANNAN-DAILY TIMES)

UPPER CHICHESTER — It had been many years since Chichester High School’s gymnasium saw a turn-them-away-at-the-door crowd for a boys basketball game. None of those fans, though, were still inside by the end of a befuddling and beguiling roller-coaster ride – even by Del Val League standards.

From the raucous atmosphere at tip to Chester getting a security escort to the buses for an exit, the fans missed the business end of a 77-74 Clippers’ win, one that wound through a seemingly safe Chester lead in the final two minutes, a Chichester comeback complete with buzzer-beating 3-pointer, and a vintage, steely effort from Chester in overtime.

In the process, Chester (9-7, 2-1 Del Val) ended Chichester’s 11-game winning streak, knocked the Eagles (12-3, 3-1) off their inside line to the league crown and denied Chi’s bid to beat their league rivals for the first time since the late 1980s.

Chester’s Breilynd White celebrates after a 3-pointer in the second half against Chichester Thursday night. (PETE BANNAN-DAILY TIMES)

The night – for fans and the teams – turned with 1:37 remaining on a hard foul by Chichester guard Maz Sayed on Chester’s Dominic Toy to stop an open-court layup. Sayed was assessed a flagrant foul and ejected. Toy, for the refs judging that he hit Sayed as the two tangled on the floor, was also tossed, as players from the Chester bench and fans spilled onto the court.

The teams, with Chester leading 59-48 and holding a firm grasp of the momentum, waited 17 minutes while the Chichester administration cleared the gym of spectators to ward off further disturbances.

When the free throws shook out – Chester made one of two, Chichester two of four – the Clippers still led by eight. But another, just as stark, transformation was under way.

Akhir Keys had gone 0-for-7 from 3-point range in the first three-plus quarters. The Eagles struggled offensively because they couldn’t get a 3-pointer to fall, starting 2-for-18 from beyond the arc before the stoppage, with the senior guard normally their most reliable marksman. It left the drives of Sayed (21 points on 7-for-10 shooting), the only steady source of offense, now banished to the locker room.

But whatever mental reset occurred in the gym manifested for Keys. He and Hamza Clay hit back-to-back 3-pointers to get Chichester to within two with 55 seconds left. Though the Clippers went 4-for-4 at the line in the final minute, a Zaiyin Keys and-1 with 14.4 ticks left allowed Akhir to tie the game at the buzzer, fading into the Eagles’ bench.

“I feel like in those types of situations, I should be the one to have the ball in my hands and be able to score,” Akhir Keys said.

Chester, which had ably handled the intense crowd, suddenly struggled in the empty confines, which forced a regroup in the pre-OT huddle.

“It’s tough,” Cobb said. “I’m not going to lie, we’re human. I was gassed. But as a leader on the team, I have to gather the troops. We’re all leaders in our own way, but I have to voice my opinion on some things. I think we all played our part, we all played as a team and we’re coming to be a family.”

As they did all game, Chester relied on its guards. Cobb, Kyree Womack and Breilynd White combined for 66 points, including all but two of the team’s field goals. Cobb had led the way in regulation, with six 3-pointers. He scored 16 in the first half, then after a scoreless third quarter hit a pair of 3-pointers in the fourth. His jumper with just over two minutes to play made it 58-49, the last pre-stoppage bucket.

In overtime, White (16 points, six rebounds, four steals, four assists) put back a miss to get Chester up three, then Ahkir Keys scored six straight points to make it 69-66 Chichester. Dante Atkinson, little used in regulation but inserted to shoot the Toy free throws upon his ejection, then canned a 3-pointer to tie it.

A White feed to Calvin Williams put Chester up for good. Womack (22 points, four assists) sealed it with a wing 3-pointer. That came after he and White picked off passes, Chester coach Keith Taylor astutely turning up the press with Chichester down two ball-handlers in Sayed and Zaiyin Keys (13 points, six rebounds), who had fouled out.

Akhir Keys hit a 3-pointer to get within one possession with 21.6 seconds left. But a final attempt by Clay on a two-pointer was blocked by Williams, ending the first of two meetings between the teams.

“This year we could’ve really beat them,” said Akhir Keys, who tallied 25 points. “We’ve been on a roll this year. We had the game in our hands and we let it slip away.”

If Chester’s goal coming into the game had been to silence Chichester’s fans, circumstances found a way to do that for them. But more important to Cobb was how they got there, even if it was only maroon-and-gray plastic seats there to witness the final triumph.

“We kept hearing, Chichester this, Chichester that,” Cobb said. “We respect them as an opponent – they’re a great opponent – but we had to come in here and play how we play. We’re Chester basketball. That’s how we’re supposed to play.”

Corrado Fischetti scored 14 points, Ryan Keating added 12 and Steven Tansey tossed in 10 for the Tigers (9-6, 5-5), who shot 14-for-16 at the line in the fourth quarter. Logan McKee led Garnet Valley with 14 points, and Drew Van Horn chipped in a season-best 12.

Lower Merion 63, Penncrest 57 >> Mikey Mita tallied 15 points and 15 rebounds, but the Aces did enough at the lines to fend off the Lions. Branden Hemphill added 18 points.