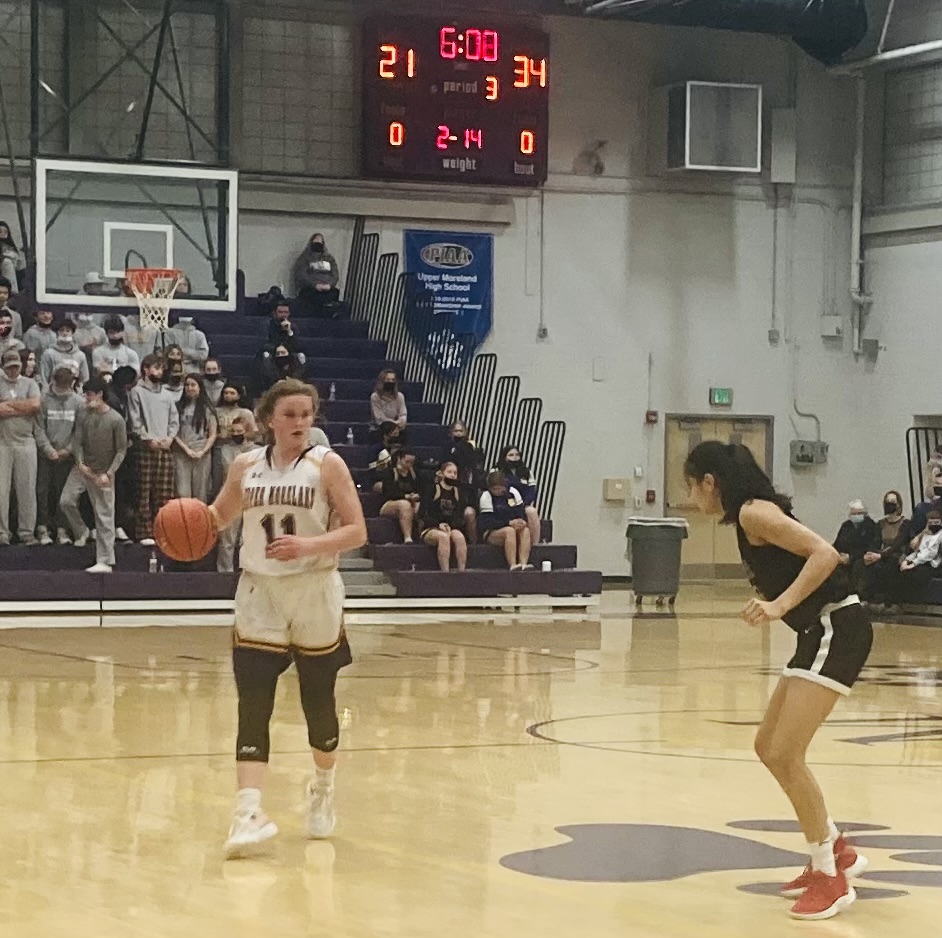 Upper Moreland 46, Hatboro-Horsham 28: EmmyFaith Wood scored 14 points, including the 1,000th of her career, as the Golden Bears won going away on Tuesday night. Holly Gohl also added 10 points for Upper Moreland. Kitty Randa finished with 10 points for the Hatters.
“Through all of my years of coaching basketball, she is unquestionably, one of the hardest working players I’ve ever coached,” Upper Moreland Head Coach Matt Carroll said of Wood. “Even better than that, she is the nicest kid you’ll ever meet. We are in our 8th season together and I still have to tell her to be more selfish. She really cares about her teammates and others perception of her and doesn’t want to be labeled a “ball hog”. I’ve always told her “the only people who are allowed to complain about you shooting too much are the people who have worked as hard as you.”‘
She is the 11th player from Upper Moreland to reach the club.

Wissahickon 39, Lower Moreland 27:  Kaitlyn McGeary put on a show with 24 points, 10 rebounds and 4 blocks as the Trojans picked up the SOL crossover win on Tuesday night. Claira Baldassano added 5 points, 6 rebounds and 5 steals for Wissahickon, while Julia Lettieri chipped in with 8 points and 4 rebounds herself.

Plymouth Whitemarsh 57, William Tennent 12:  The Colonials led 35-5 at the half and rolled to the SOL crossover win on Tuesday night. Erin Daley poured in 25 points, including shooting 5-of-5 from the free-throw line, for PW. Abby Sharpe also added 15 points for the Colonials (13-2, 9-1), who will host Upper Moreland on Thursday night.

Calvary Baptist 52, Quakertown Christian 13:  After losing their starting forward Grace Leader to a sprained ankle during warmups, the Warriors responded by jumping out to an early lead and never looking back. The Warriors led 16-4 after the first quarter and 27-6 at halftime. Calvary (8-2, 3-0) was led by senior Aubryn Ridge with 17 points and sophomore Aubrey Hampton with 12 points. Genesis Olaleye dominated the boards with 11 rebounds.

Archbishop Carroll 60, Archbishop Ryan 29: The Patriots were paced by 22 points from Taylor Wilson as they improved to 4-0 in the Catholic League. Alexis Eberz added 11 for Carroll, while Oliva Nardi scored 8. Brooke Wilson chipped in with 7 rebounds and 6 assists.

Methacton 59, Perk Valley 58: The Warriors (12-5, 6-2) held on for the thrilling result on Tuesday night when Sal Iemmello hit a 3-pointer with a little more than three seconds remaining in the contest. Matt Christian led Methacton with 19 points, while Alex Hermann added 18. Iemmello finished with 9 points and just the one 3-pointer.

Germantown Academy 52, Haverford School 48: Only four players scored, but it was enough for the Patriots on Tuesday in Inter-Ac play. Bryce Rollersen led GA with 23 points, including 8-of-10 from the free-throw line. Flinn Brooks chipped in with 15 points for GA.

Neshaminy 53, Central Bucks East 42:  The Patriots were outscored 31-21 in the second half and dropped the SOL crossover on Tuesday night. Joey Giordano scored 11 points, while Justin DiRoberto added 10 points for CB East.

Wissahickon 65, Lower Moreland 59: Dom Vacchiano poured in 31 points to carry the Trojans to the SOL crossover victory on Tuesday night. Vacchiano scored five shots inside the arc, five shots outside the arc, and went 6-for-6 from the free-throw line.

Plymouth Whitemarsh 98, Wissahickon 88: The Trojans had some solid swims despite dropping the SOL Liberty meet on Tuesday. Maddie Johnson and Bernice Fu went 1-2 in both the 200 IM and 100 breast to highlight the race for Wissahickon.

Academy New Church 42, Friends’ Central 36: The Lions won four matches by fall and recorded the win on Tuesday. Winning by fall for ANC were Dylan Trotman at 138, Luke Hyland at 150 in 14 seconds, Trent Layton at 157 and Brady Carver at 190.