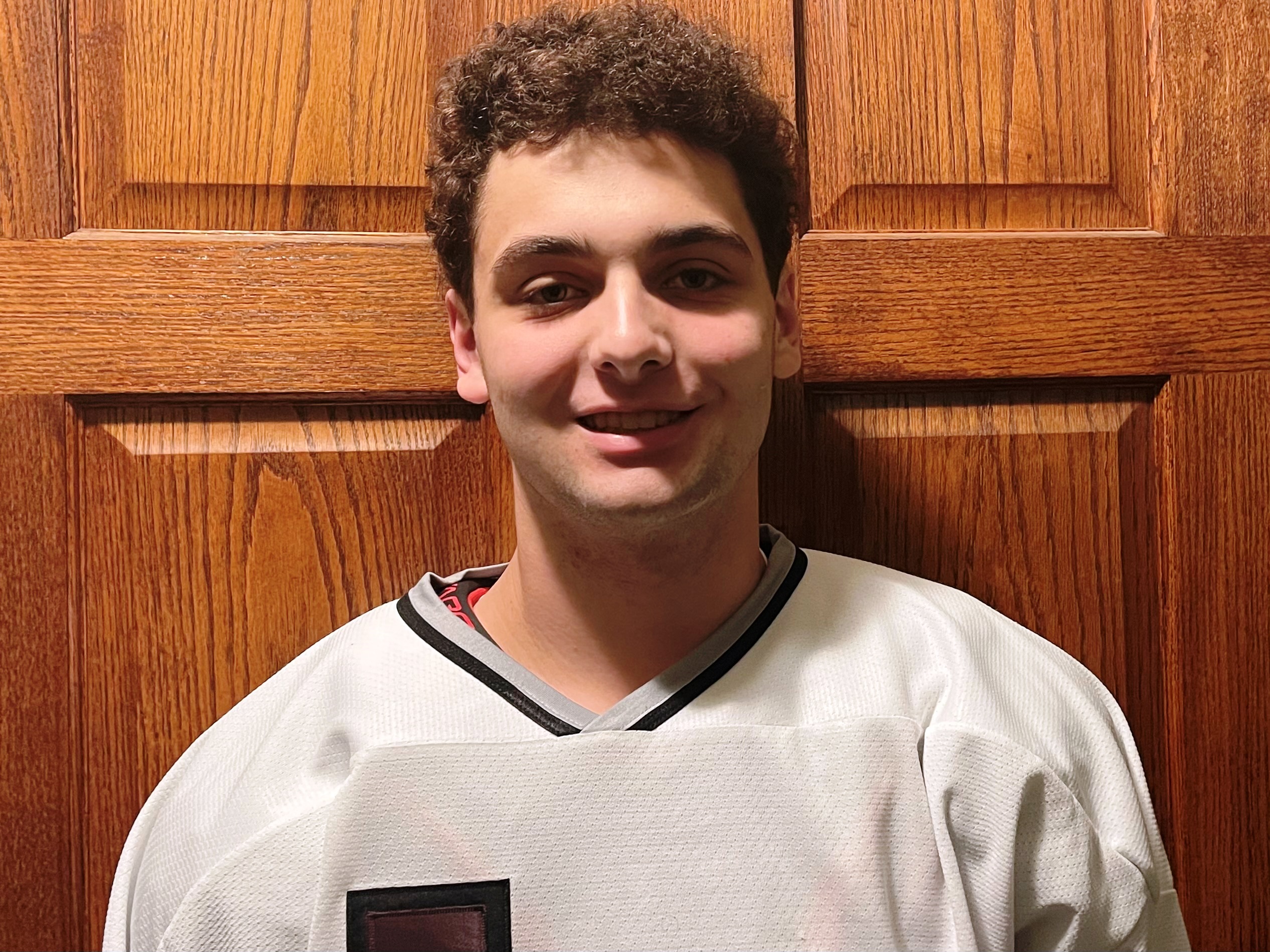 Peterson, a senior defenseman for the Lower Merion High School ice hockey team, led the Aces in scoring and has been a key factor in their drive to a Central League playoff spot. Noted for his knack of scoring big goals, he routinely covers the opponent’s top player. LM head coach Dan Harkins said, “Dylan is a tremendous player and fun to watch but he is an even better teammate. He brings a positive attitude to the team and with his playing experience, it’s like having another coach out on the ice.” Peterson also plays varsity lacrosse for Lower Merion, where he is a member of the National Honor Society and the Israeli Culture Club.

Q: What have been the biggest keys to your leading the team in scoring?

A: There have been a lot of things that have led to this. Coach Harkins having the trust to put me out in positions where I can succeed is a big one – power plays, end of games, etc. Coach Harkins has really helped me with my decision-making and picking my spots of when I can be more assertive offensively. My unselfish teammates also have been a big key in this.

Q: Have you always played defense? What originally attracted you to that position? What do you think are the most important attributes of a good defenseman?

A: I’ve pretty much always played defense. I started playing defense originally seeing my brother play defense and it really just stuck. As my game developed it became apparent to my coaches that my vision of the ice was one of my best attributes and as a defenseman having the play in front of me at all times really helps me utilize my vision on the ice.

Q: How do you view your role as a leader on the Lower Merion squad – on and off the ice?

A: As a senior I feel like the underclassmen, especially the freshmen, look up to me and the other seniors. On the ice I really just try to lead by example and always remain positive no matter the situation. This season everyone knew it would be different with a new coach and playing in a different division than in years past. The team has really adapted well and Coach Harkins has done a great job bringing us closer as a team and allowing different peoples’ voices to be heard.

A: I think the strongest aspect to my game is my hockey IQ. This has been something that my brother Evan, along with a bunch of great coaches, have really helped me out with, always watching and breaking down film with me. Most recently I have been working on my first step trying to get it to be quicker as well as my release on my shot. Coach Harkins has been great with instilling confidence in me and giving me pointers with those things.

Q: You play club ice hockey for the Philadelphia Jr. Flyers – what has been your favorite experience with the Jr. Flyers?

A: The memories I have made with that team have been unbelievable. From traveling across the country and experiencing places I never would have experienced otherwise, to building relationships with my teammates, to winning tournaments and celebrating league titles, those memories and experiences will last for the rest of my life. In addition, this team and all the travel involved has really helped my relationship with my parents grow. All the long car rides and plane rides is a lot of time with them that I really wouldn’t change for the world.

Q: Are there any hockey players who you really admire, and why?

A: As much as I hate to admit it, the hockey player I admire the most is Sidney Crosby. He has been among the best, and most hated players in the NHL for years. His understanding of the game and his work ethic is something I have always looked up to.

Q: You wear No. 27 for Lower Merion ice hockey – is there a reason you chose this number?

A: Many seasons back, I was randomly assigned No. 27 for a season. That season happened to be my most memorable season to date and since then the number has just stuck for me.

Q: Who have been your biggest ice hockey mentors, and what was the important thing each of them taught you?

A: My biggest mentor has without a doubt been my brother Evan. He unfortunately had to stop playing hockey at a young age as a result of a concussion. He wishes more than anything he could be on the ice. He motivates me to be the best player I can be. In addition, he has an impressive understanding of the game and constantly helps me fine-tune my game.

Q: What is your favorite academic subject at Lower Merion? What do you think you’d like to major in at college?

A: My favorite subject at Lower Merion is Statistics. The course has helped me interpret things in life so much differently than I had in the past. In college I plan on majoring in Business possibly on a pre law track. I also have interest in studying kinesiology.

Q: What had been your most memorable experience as a Lower Merion lacrosse player?

A: My most memorable moment as a lacrosse player was the team’s 7-5 overtime win against Ridley last spring. Prior to the game, both teams honored Headstrong Foundation, who had recently helped our coach Chris Mandarino beat cancer.

Person I most admire: “My brother Evan.”