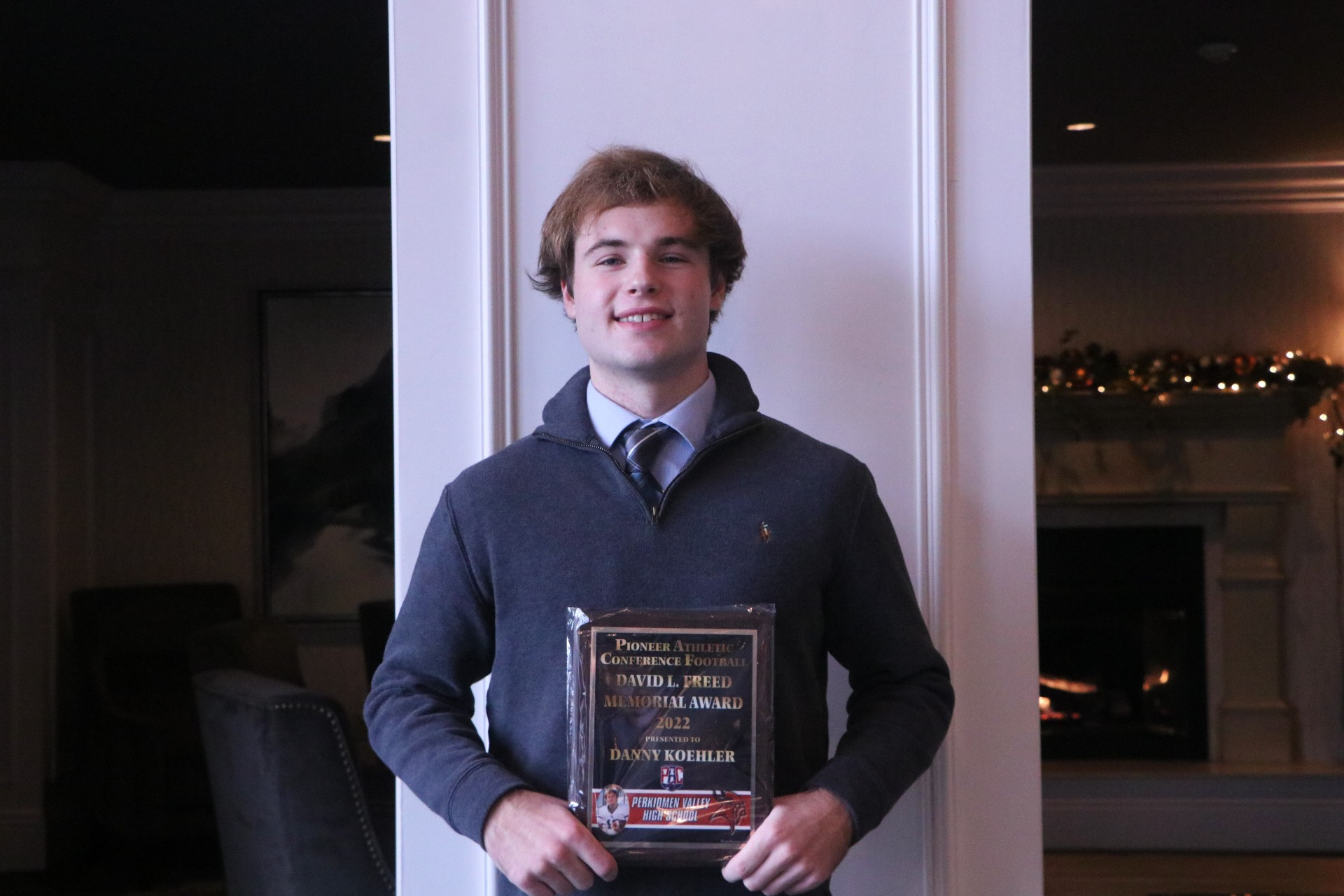 Perkiomen Valley quarterback Danny Koehler stands with his plaque after being named the recipient of the David L. Freed award during the 35th annual Pioneer Athletic Conference coaches association banquet at the RiverCrest Golf Club in Phoenixville on Sunday. (Evan Wheaton - MediaNews Group)

UPPER PROVIDENCE >> Danny Koehler knew he’d have his moment. He, like many others, just figured it’d arrive in a different fashion.

After waiting in the ranks behind Ethan Kohler for three years, Koehler debuted as Perkiomen Valley’s starting quarterback this past season. In a Week 2 game against Downingtown West, Koehler was brought down on a play and heard the click in his left knee.

An ACL tear meant the senior’s season came to an end and with it, his time on the varsity field for Perkiomen Valley.

“It’s been hard. It stinks. I was looking forward to the season, but at the end of the day, it’s just a game,” Koehler said. “It was fun while it lasted and life goes on.”

Koehler found himself a new role on the team, being a point of guidance and leadership from the sideline and in the locker room. On Sunday, he was named the David L. Freed award recipient at the 35th annual Pioneer Athletic Conference coaches association banquet at the RiverCrest Golf Club in Phoenixville.

The David L. Freed award is named after the Spring-Ford lineman who died during a practice in 1975 after colliding with a spring-loaded blocking machine, which has been out of use since. The award is given to a senior who embodies dedication, self improvement and unquestioning faith of the award’s namesake.

Given the nature of the award, as well as the past few months of his life, Koehler took a moment to reflect on both his varsity career and what the injury did to broaden his lens.

“It made me realize there are bigger things out there than sports,” Koehler said. “It’s really about who you are as a person that matters in life and that’s what people are going to remember you for.”

The special award winners pose for a photo at the PAC Football Banquet on Jan. 8 at RiverCrest Golf Club. (Evan Wheaton – MediaNews Group)

Spring-Ford quarterback Matt Zollers and Perkiomen Valley running back Ryan Klimek were named co-Liberty offensive players of the year while Upper Merion’s Nolan Clayton was given the honor on the Frontier side.

The Bill Rodgers Lineman of the Year award’s recipients were Pottsgrove’s Mark White for the Frontier and Spring-Ford’s Luke Pajovich for the Liberty.

“It’s great, all the work in the summer especially,” Pajovich said on finishing his career with Spring-Ford, which made a run in the District 1 bracket. “Last year, it didn’t end how we wanted it with districts. This year, winning against Ridley was a really big deal for us and I think we left it all out on the field.”

Sophomore Pat MacDonald took Koehler’s place at quarterback and went on to complete 95 of his 149 passes for 1,187 yards, 11 touchdowns and eight interceptions for a 144.30 QBR this past fall. The young signal caller led Perkiomen Valley to an 11-2 record with a PAC title over Pope John Paul II and came within one point of advancing to what would have been the program’s first ever District 1 championship game.

“It was awesome to see. He didn’t have a single JV game under his belt and he got thrown in with probably our two hardest games against Cheltenham and Roman Catholic for his first varsity experiences,” Koehler said.

In tune with Koehler’s assessment and how the David L. Freed award came to be, Perkiomen Valley coach Rob Heist gave the closing remarks at the banquet, focusing his time at the podium to remind those in attendance of life being bigger than football.

Heist referenced the recent injury to Buffalo Bills safety Damar Hamlin, who suffered cardiac arrest and was administered CPR on the field during a game against the Cincinnati Bengals on Jan. 2.

The ordeal polarized the NFL and much of the professional sports world, and given Hamlin’s near-death experience, Heist took the time to reiterate that those in attendance should remember to take stock of what’s most important.

“I think we were reminded a bit, I hope anyway, last Monday night of where sports and games should be ranked in our collective priority list when we watched the injury to Damar Hamlin for the Buffalo Bills last Monday night in a football game,” Heist addressed. “Football is just that, it is a game. Yes, it’s important and sometimes it feels more important than maybe it is.”

Heist admitted he can get caught up in the game as much as anyone, jokingly noting his loss of sleep during the buildup to games against PAC rival Spring-Ford each year.

“I probably put a little too much emphasis on it. I don’t know if (Spring-Ford) coach (Chad) Brubaker would agree with me on it or not, but it seems to consume my every-waking moment. And it probably shouldn’t,” Heist said. “It is a game, it is intended to be fun. Yes, we take it seriously, we’re all competitive, that’s why we’re all in this room right now. But I do think we need to understand the priority.”

The banquet was closed out with Heist calling for everyone to be mindful of those in their communities, for better treatment of officials and for those in attendance to continue to support the game that brought them all together on Sunday.