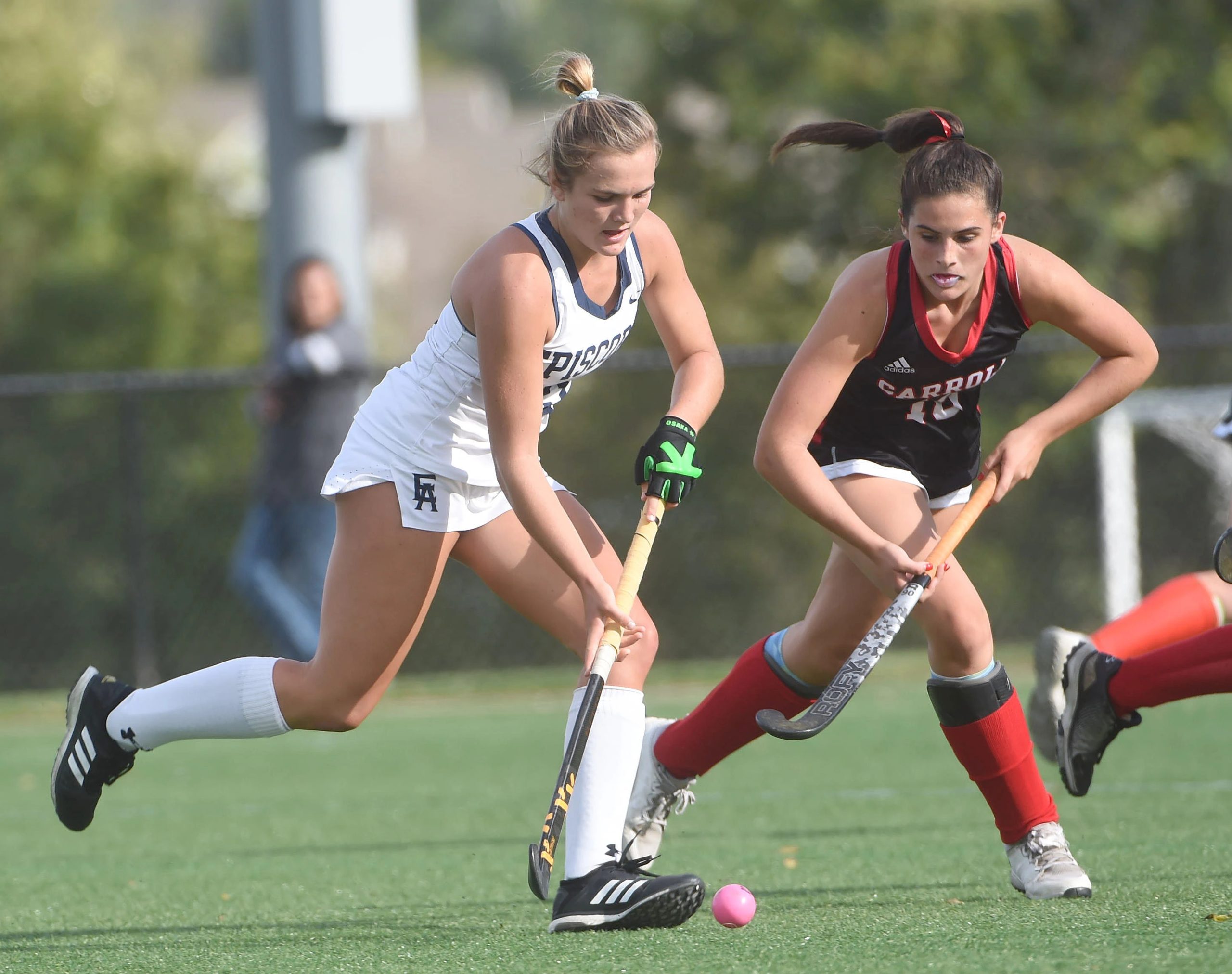 In addition to Player of the Year Saylor Milone of Notre Dame, the All-Delco team includes:

Maeve Boston, Cardinal O’Hara: The senior midfielder and two-time All-Delco selection was part of a solid 1-2 scoring punch with Sofia Brown. She was as good at finding her teammates as she was getting the ball in the cage. She tallied 12 goals and 19 assists to help the Lions go undefeated in the Catholic League (8-0), 16-6 overall and win the District 12 Class 3A title. Boston scored the winning goal in a 1-0 overtime victory over Archbishop Carroll in the regular season. A two-time Catholic League MVP, Boston will continue her field hockey career at Villanova.

Radnor’s Alex DeCain winds up to shoot in a game against Haverford in 2021. (Pete Bannan/MediaNews Group)

Sophia Brown, Cardinal O’Hara: Brown was the other half of that combination with Boston. She led the Lions with 20 goals and also dished out seven assists. She was a strong defensive presence for O’Hara, using her speed and stick skills to thwart many a rush by the opposition. A two-time, first-team All-Catholic selection, the senior midfielder will continue her field hockey career at West Chester, which reached the semifinal round of the NCAA Division II tournament.

Charly Bruder, Episcopal Academy: The Churchwomen scored 62 goals this season, Bruder had 28 of those tallies, including more than 10 game-winners to earn All-Inter-Ac honors for the second year in a row. She scored the winning goal against Notre Dame to give EA a share of the Inter-Ac League title. She also went 75 yards to put home the tying goal in a 3-2 loss to powerful Hill School in the PAISAA final. The two-time All-Delco and senior midfielder was selected as one of the top 50 players in the Class of 2023 by Max Field Hockey. She will take part in the USA Field Hockey U-18 selection camp and will continue her career at NCAA Division I champ North Carolina.

Alex DeCain, Radnor: Just a sophomore, DeCain already is a two-year starter for the Raptors and a two-time, first-team All-Central League selection. A tough, aggressive player, she spearheaded an attack that powered Radnor to a third-place finish in the Central League and the District 1 Class 2A tournament, which earned the Raptors their first trip to the PIAA playoffs since 2009. DeCain led Radnor with 33 goals and 11 assists and was named as one of the top 100 players to watch in the Class of 2025 by Max Field Hockey.

Lauren DeRose, Agnes Irwin: A top-flight defender, DeRose anchored the back line for the Owls while also seeing time in the midfield. A two-time All-Delco and Inter-Ac pick, she was selected as one of the top 50 players in the Class of 2023 by Max Field Hockey and is part of the U.S. U-18 national team along with Bruder, and will attend the USA Rise U-19 selection camp. Tallied four goals and four assists for the Owls and will continue her field hockey career at Iowa.

Riley Gallagher, Garnet Valley: A four-year varsity starter who did not come off the field for the Jaguars. The senior midfielder played mainly on the right side but did see some time on the left side. Earned first-team All-Central League honors for the third year in a row and also first-team Class 3A All-State recognition. Gallagher was the primary hitter on corners and finished the season with 10 goals and 10 assists to lead the Jags to a second-place finish in the league. She has committed to play field hockey at Temple.

Sienna Golden, Archbishop Carroll: One of the finest finishers in the county, the junior forward led the Patriots with 48 goals including seven in a 10-0 victory over Bonner & Prendergast. A two-time All-Catholic selection, Golden powered an offense that led the Patriots to their second straight Catholic League title and fifth consecutive District 12 Class 2A championship. She has committed to play field hockey at Ohio State.

Courtland Schumacher, Archbishop Carroll: It’s easy to see why Schumacher was selected as the team MVP. She was the driving force behind a team that won the Catholic League title for the second year in a row and the District 12 Class 2A crown for the fifth consecutive season. Schumacher came through when the Patriots needed it the most. Her goal 4:45 into the game was the difference as Carroll topped O’Hara, 1-0, for the Catholic League title. A year earlier she set up Grace O’Neill’s winning goal in overtime in the PCL final. Schumacher finished with 10 goals and nine assists and plans to play at Fairfield University.

Alana Poole, Garnet Valley: Drexel is getting a good one in Poole. The senior and three-year varsity performer was a rock in the cage to help the Jaguars (16-4, 10-1 Central League) finish second in the league behind perennial heavyweight Conestoga. Poole posted a 0.61 goals against average during the regular season and a 77 percent save rate. She was even better in the postseason, stopping 87 percent of the shots sent her way in the District 1 Class 3A tournament. Poole finished the season with an overall save percentage of 80.73, stopping 88 of 109 shots.

Maeve Seeger, Notre Dame: Name it and Seeger did it for the Irish. Need someone to push the ball to the forwards? The junior midfielder/defender was quite capable to doing that. Need her to drop back on defense? She was just as comfortable in that role. Her versatility is what made her so valuable to the Irish in their push to a share of the Inter-Ac League title. A two-time All-Delco and All-Inter-Ac selection, Seeger posted four goals and three assists while serving as one of Notre Dame’s captains.

Alexis Ventresca, Episcopal Academy: The senior midfielder did not put up gaudy numbers but she has been a steady force for the Churchwomen throughout her four-year varsity career on offense and defense. Ventresca tallied four goals, dished out three assists and made one defensive save. Two of those helpers came in a 3-2 triumph over District 1 Class 2A champ Villa Maria. However, it was her leadership on and off the field that set her apart and earned her the team’s leadership award. She will play lacrosse at Northwestern.