Methacton knocks down 12 3-pointers in win over Abington 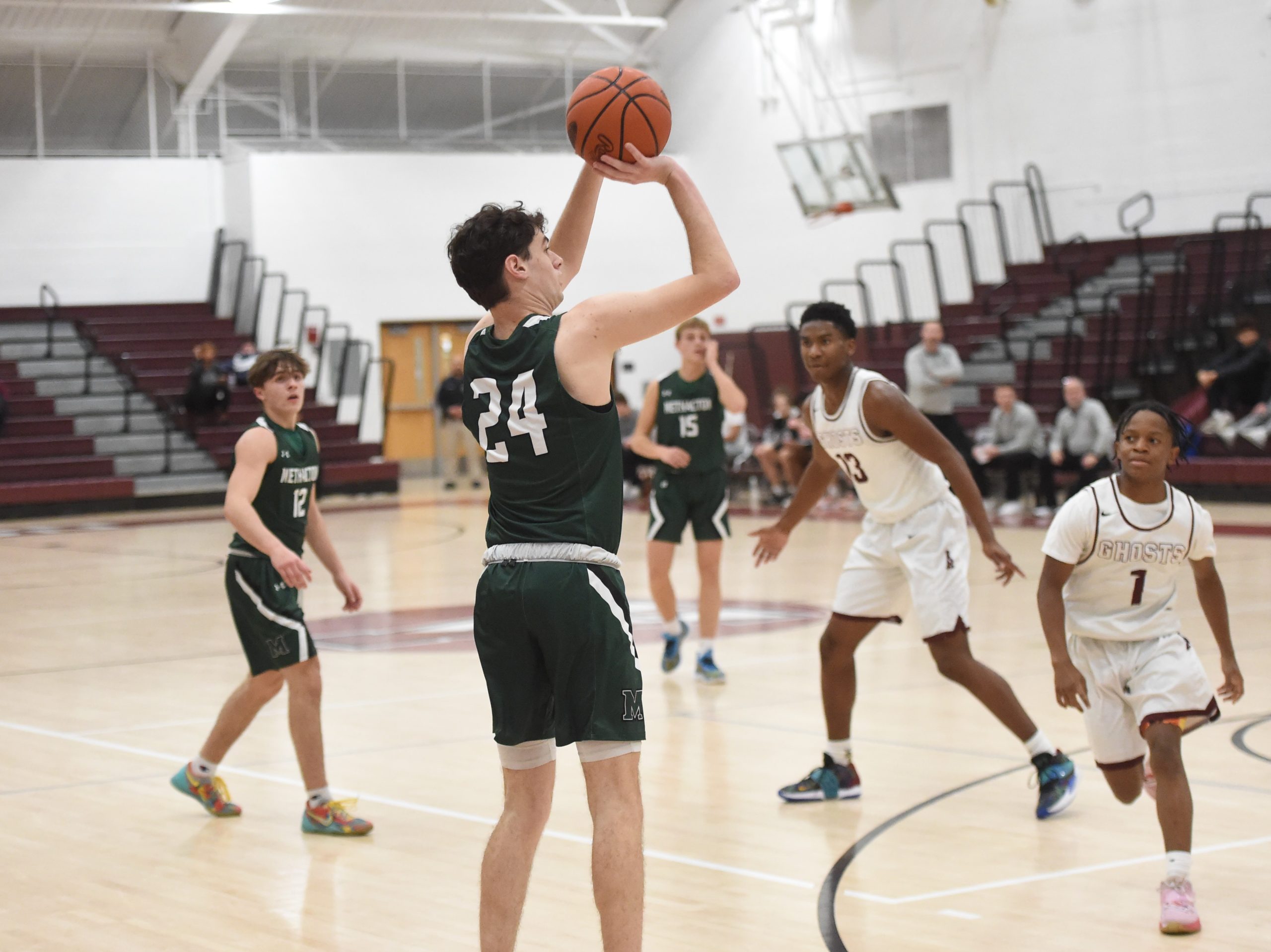 ABINGTON >> Matt Christian does not have much hesitation when he gets free behind the 3-point arc.

Christian and the Warriors boys basketball team had no qualms putting up shots from long range in Tuesday night’s nonleague matchup with host Abington. And in the first half, they kept knocking them down.

A 12-0 run powered by a quarter of triples – including back-to-back treys by Christian – sent Methacton to the second quarter leading 17-9. The Warriors went on to hit nine 3-pointers in the first half as they built a 13-point advantage at the break and held off the Galloping Ghosts to earn a 68-58 victory.

“We have some good shooters on here so if they’re open we want them to shoot the ball but that wasn’t in the game plan per se,” Methacton coach Pat Lockard said. “But they were the open shots so I was happy the guys took them.”

The Warriors (2-1) finished with a total of 12 3-point makes from eight different players, Christian leading the way with four before going 7-of-8 from the foul line in the fourth quarter to score a team-high 19 points. Alex Hermann drained a pair of treys in the second quarter in adding 18 points.

“I think we have a balanced 3-point shooting team,” Lockard said. Obviously, Matt Christian returning for us, we have a lot of confidence in him being able to shoot the 3-pointer. I think we were actually talking about that at halftime, I think we shot 56%, we were 9-of-16 from three in the first half, 27 of our 35 points came from the three which is great but you can’t always rely on that percentage to stick at that 56%.”

“So we want to get Hermann the ball more, get him involved, attacking the basket with his length and finishing ability. I think that can balance out some of that perimeter shooting.”

BOYS #BASKETBALL: Half @MHS_BoysBBall 35, Abington 22. Warriors knock down 9 3-pointers in the 1st half, the last by Alex Hermann right before the 2Q buzzer. pic.twitter.com/5XNwlBkQQU

Jeremiah Lee scored a game-best 21 points for Abington (0-2), which could only get as close as seven – 65-58 in the fourth’s final minute – after trailing 35-22 at halftime. Josh Yong had nine of his 13 points in the second half while Kellen Ingram chipped in 11 points for the Ghosts.

“They shot the ball really well in that first half – I mean all game but that first half, I mean, they put on a shooting display,” said Abington coach Charles Grasty of Methacton. “They run good stuff, get their guys open and we try to close out but they share the ball well and they hit the open man, go to the hot man and made shots.

“We were in a hole and we tried to fight back but it was just too big of a hole.”

Abington led 7-2 after a Young basket but an Evan Spang 3-pointer was the beginning of a 15-2 Methacton run to end the opening quarter and give the Warriors the lead for good.

An Ingram two made it 9-5 before Sal Iemmello hit a three and was fouled at 4:42 – Iemmello could not complete the four-point play but Christian connected on his first trey for an 11-9 Methacton edge.

“We noticed they weren’t really getting back in transition,” Christian said. “When we were setting our plays they were tight to me so in transition I was open a lot so that’s where I got most of my shots.

Christian followed by draining another three with Cam Chilson connecting beyond the arc late in the quarter to make it 17-9 Warriors.

“Everyone was letting them fly and that’s what we need every single game. And then now as teams start scouting us they’re going to stay tighter to me and guys got to step up and take some more shots.”

Lee began the second quarter with fourth straight points to pull Abington to within 17-13 only for Methacton to answer with an 8-2 burst to go up 25-15 on a Christian three.

“And then that’s when they hit their shots. We went away from going inside and they hit and then we had to scramble and they made us pay.”

A Lee 3-pointer had the Ghosts down 27-21 but the Warriors ended the first half with an 8-1 run – Herrmann hitting a triple off a Chilson assist for a 13-point Methacton lead at halftime.

BOYS #BASKETBALL: End 3Q @MHS_BoysBBall 50, Abington 37. Ghosts pushing to get into this but Methacton hitting timely 3s, including this one by Preston Hill at the buzzer. pic.twitter.com/L1Pi5X7rBk

“We’re just trying to find different ways to get him the basketball and he’s such a good teammate, unselfish kid I don’t think he always realized the ability that he had,” said Lockard of Hermann. “And that can be tough to step into that role especially with (Cole) Hargrove and (Brett) Byrne not being here anymore we need guys to take over that.

“And I thought Alex did a really great job of really attacking tonight and finishing around the basket.”

A Hermann bucket to open the third made it 37-22. Abington whittled its deficit down to nine in the quarter at 45-26 after an Ingram two. However, a Chilson basket had the Warriors back up double digits while Hermann drove and dished to Preston Hull for a corner trey before the buzzer to make it 50-37.

Methacton did not hit a shot beyond the arc in the fourth but withstood Abington’s full-court pressure better than it had Upper Darby’s in a loss to the Royals last Saturday.

Methacton’s Sal Iemmello (12) drives up the court against Abington during their game on Tuesday, Dec. 6, 2022. (Mike Cabrey/MediaNews Group)

“That was huge cause Saturday we were up 10 and Upper Darby came back on us so that was a big emphasis in practice yesterday,” Christian said. “This was a huge bounce-back win for us and I thought we handled the pressure pretty well.

A Herrmann bucket to start the fourth put up Methacton 15 again at 52-27. A Lee 3-pointer had Abington trailing 58-49 but the Ghosts could not get any closer until another Lee trey made it 65-58 in the final minute.