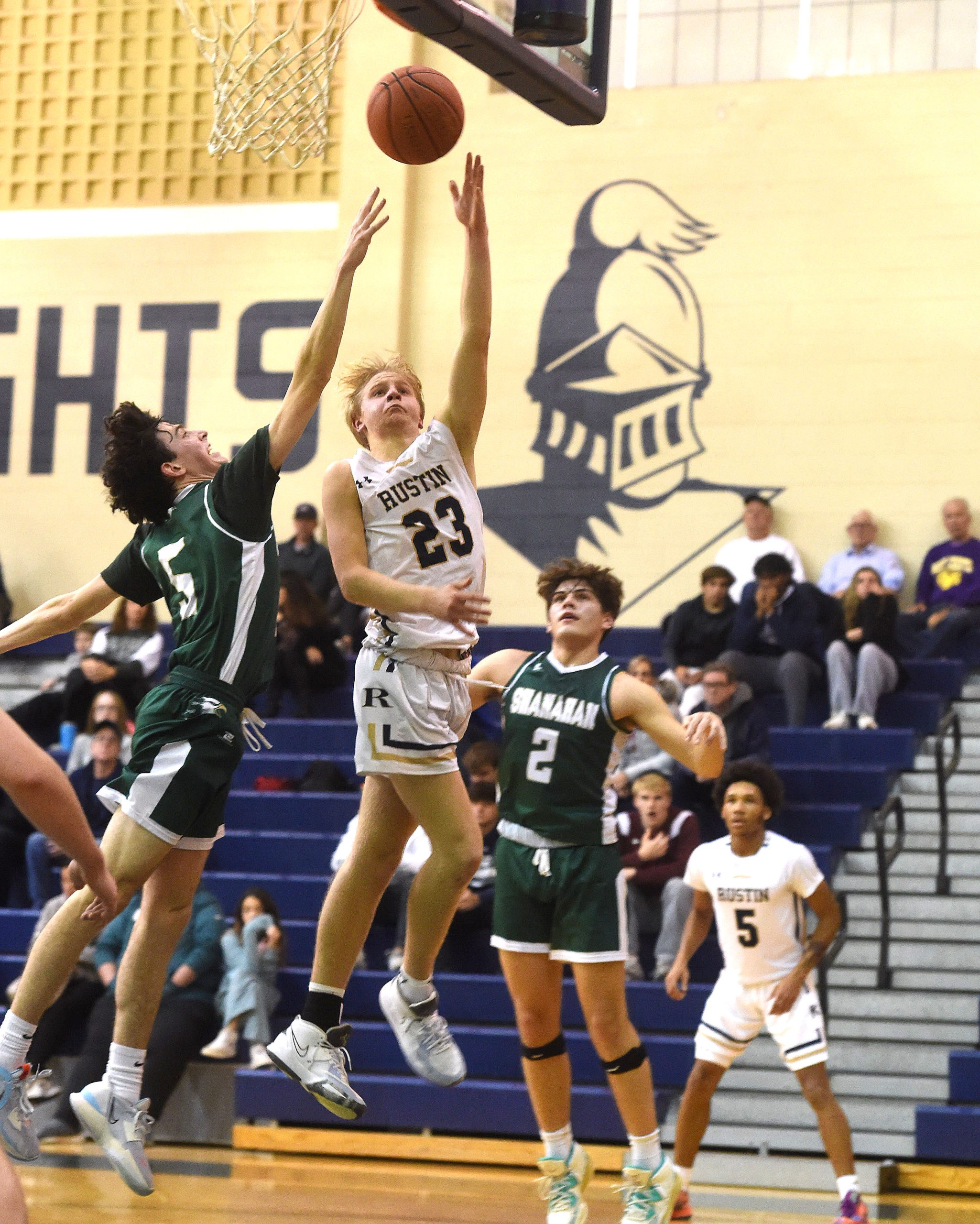 WESTTOWN >> Things did not look very bright for the Bishop Shanahan boys basketball team Tuesday night at halftime in the Eagles nonleague game with West Chester Rustin.
The host Golden Knights had a 15-point halftime lead and Bishop Shanahan looked like they were going to be blown out of the gym.
But, a spirited second half saw the Eagles outscore Rustin 42-25, and when Charlie Federico scored on a spin move with two seconds left, the Eagles pulled off a tremendous comeback for a thrilling 60-58 win.
Federico tallied 14 points, and his teammate Ben Rodner-Tims poured in a game high 34 points in a sparkling performance, combining some dazzling penetration to the basket with some solid outside shooting.
“The end of the game I saw that they were face guarding Ben,” Federico said. “And I just got the ball and dribbled into the lane and pulled my spin move and the ball went in. We were all ticked off at ourselves at halftime and we came out and really turned up the pressure on the defensive end. We wanted to pressure them and they started to turn the ball over. We knew we were going to come back on them.”
Bishop Shanahan (1-2) started the third period on a 10-0 run to cut the Golden Knights (0-2) lead to 33-28. Rodner-Tims started off things with a steal and a layup. Logan Kapcysnski then drained a long three-ball and that was followed by a Rodner-Tims trey.
Rustin turned the ball over six times in the third period after only having two turnovers in the first half. The Golden Knights shot 13-for-24 from the field in the first half.
“We just decided at halftime to speed them up and make then uncomfortable,” Rodner-Tims said. “We just dedicated our effort on the defensive end and they started to look uncomfortable and that is what got us back in the game tonight. We wanted to get up in their faces.”
Rustin still had a 42-38 lead after three periods but the Eagles outscored them 20-9 in the third period. The teams went back and forth early in the fourth period and the Eagles took their first lead of the night when Rodner-Tims hit two free throws with 4:51 left in the fourth period.
The teams then traded missed shots, and with 2:47 left in the fourth period, Rodner-Tims scored in the lane for a 54-50 Eagles advantage.
Rustin shot just 3-for-12 in the fourth period. After an Eagles turnover, Chase Hatton buried a three-ball from the top of the key drawing Rustin to within 56-54 with 1:23 left in the fourth period.
After the Eagles missed on two inside chances, the Golden Knights had possession with 54 seconds to play. The Golden Knights got fouled and hit one free throw, and then after an Eagles miss, they turned the ball over and Federico was fouled. He hit both free throws for a 58-55 Eagles lead with 32 seconds left in the fourth period.
But Rustin was not done. Tyler Giunta drained a long three-ball to knot the score at 58-58 with 19 seconds to play. Giunta led Rustin with 16 points, including three treys.
This set up the Eagles for Federico’s heroics. Bishop Shanahan took the ball inbounds under the Rustin basket. Kapcynski took the ball over half court, passed to Federico, who drove the lane, spun and hit the runner. The Eagles bench poured onto the court as Shanahan had its first win of the young season.
“We just needed to show some more heart on the defensive end in the second half,” Bishop Shanahan coach John Dougherty said. “And we call Ben ‘Buckets’ because he can really score,. When he hits a few from the outside, the lanes open up for him and he took over tonight. Rustin is a great team and Vince (Coach Mostardi), does a real good job with his team. All these games within the Ches-Mont are battles and this was tonight for sure.”
Bishop Shanahan 60, WC Rustin 58
BISHOP SHANAHAN (60) Rodner-Tims 12 9-12 34, Kapcynski 2 0-0 5, Federico 5 4-5 14; Alexander 0 0-3 0, Scaggs 1 0-0 2, Griffin 2 1-1 5, Snyder 0 0-0 0, Boyle 0 0-0 0. Totals  22 14-20 60.
WC RUSTIN (58) Nochumson 2 2-4 6, Giunta 6 1-1 16, Hatton 2 5-6 11, Schlesinger 2 3-4 8, Crispino 1 0-0 3, Murray 2 2-4 6, Hasson 1 0-0 3, Sproull 2 1-2 5. Totals 18 13-21 58.
Bishop Shanahan  7 11 20 22-60
WC Rustin            13 20 9 16-58
3-point goals: Kapcynski, Rodner-Tims, Giunta 3, Hatton 2, Schlesinger, Crispino, Murray, Hasson