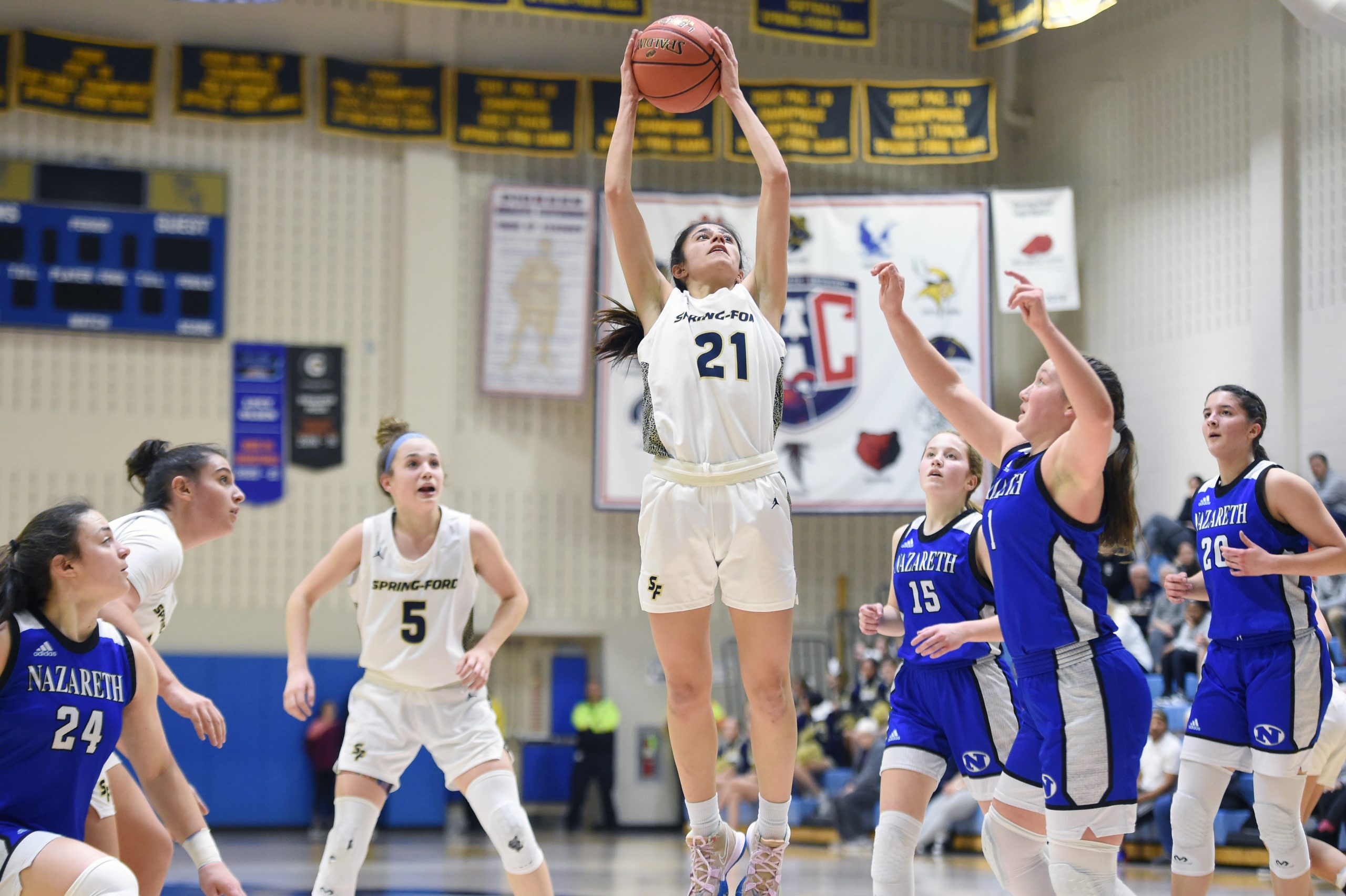 Spring-Ford’s Anna Azzara (21) leaps for a rebound against Nazareth during a PIAA Class 6A game at Spring-Ford. (Owen McCue - MediaNews Group)

Outlook: Longtime assistant Troy Sweisfort has moved into the head coaching spot for the Boyertown girls program, replacing Jason Bieber after 13 seasons. The majority of the Bears’ rotation returns, including leading scorer Carlie Schweizer (9.5 ppg). The Bears may again take their lumps against the elite teams in the PAC Liberty like Spring-Ford and Perkiomen Valley, but will look to make some headway in the win column in crossovers and non-league play with hopes of improving on the four wins of 2021-22.

Outlook: First, the bad news: there is no replacing graduate Nicole Timko (Christopher Newport), last year’s Mercury All-Area Player of the Year who finished her career second all-time on the Pioneer Athletic Conference scoring chart. Beyond Timko, Methacton graduated two other college-level players in Tori Bockrath (Delaware Valley) and Kayla Kaufman (Gwynedd Mercy). But there’s good news: the Warriors return a pair of All-Area second team selections in senior point guard Cassidy Kropp (9.7 ppg) and senior forward Mairi Smith (8.0 ppg). Both can handle a greater scoring load while rotational players from a year ago like Reana Torres and Abby Arnold will be looked on to become those complementary pieces to keep Methacton a championship chaser.

“We return two starters from a season ago who are two of the best in the league and our area, and expect the rest of the team to step up,” Methacton coach Craig Kaminski said. “In addition to this, the younger players need to develop some depth as the season goes on. The team will need to be able to adjust on the fly, stay positive, and most importantly enjoy playing and having fun every second we get to step on the court for practices and games. Our goals are always to qualify for the league, district and state playoffs.”

The PAC Liberty remains stacked – 3 teams made states last year – and top rivals Spring-Ford and Perkiomen Valley have only gotten stronger. The Warriors should experience a transitional period while not being centered around Timko for the first time in four years, but in the end Methacton should be back chasing postseason play and a chance for a fourth trip to states in five years.

Outlook: Greg Bates, a Norristown coaching fixture for more than two decades, returns as head coach of the girls’ squad. Junior Azjiona Golston led the team in scoring last year with 12.3 points per game. The Eagles have the tough task of playing in a stacked PAC Liberty Division but can look to crossover and non-league play to try to improve on last year’s four-win year.

Outlook: OJR faces challenges from a top-heavy PAC Liberty and the requirement of filling the void left by graduate Avery White (Chestnut Hill), the program’s all-time leader in points (1,320), assists (240) and steals (221). The return of junior guard Asya Price will be a boost after she missed 2021-22 with an ACL injury and she’ll complement the returning core that’s led by senior three-sport standout Gabbi Koury.

“We return eight of the top nine from last year and have a good freshmen class as well,” Owen J. Roberts coach Jeremy Mellon said. “The liberty division will be very difficult again this year as Spring-Ford, PV, and Methacton all return strong teams. We have a very challenging non-league schedule that sees us take on Northampton, Central Wise County, Va. (defending 4A state champs), Downingtown East, Central Bucks South, and Conestoga. We’re looking forward to the challenge!”

Outlook: Perkiomen Valley was the area’s most intriguing team last season when an energetic and deep freshmen class paired with multi-year senior starters Jen Beattie and Emma Miley to earn the Vikings their deepest run to date, reaching the final eight of the state. Beattie and Miley have graduated and yet Perk Valley has as high – or higher – a ceiling this winter.
PV features two returning All-Area first teamers, sophomore center Quinn Boettinger (10.2 ppg) and sophomore guard Grace Galbavy, who transferred from Upper Perk to PV after scoring 18.9 ppg in her rookie season. The rest of the core are also sophomores, alongside senior captain Ella Stein. PV will miss leading rebounder Grace Miley, who will miss the year with an ACL injury. Somehow, the Vikings are just as intriguing this winter to see how Galbavy integrates with her new team and if the sophomores can continue an upward trajectory that has PV poised for a special few years.

“We will have to do some growing and learning on the fly to get back to where we want to be, in the mix for PAC, district and states,” PV coach John Russo said.

Outlook: Coach Tracey Sterling thought her team found its way in the middle stages of last season, which resulted in a third-place finish in the PAC Frontier. Phoenixville is poised for more upward momentum this winter and look poised to be a leader in the division.

Phoenixville returns all five starters, including multi-year starter Jaime Michaud, a senior who scored a team-best 7.8 ppg in 2021-22. Close behind was Emine Ulcay with 7.7 ppg.

“Very optimistic about the season,” said Sterling. “Our freshmen who started for us last year are now sophomores and have matured and understand the nuances of high school varsity basketball. We have a very talented group of freshmen who will contribute as well.”

With last year’s top 2 in the Frontier, PJP and Upper Perk, in flux, the Phantoms look poised for a division title push and spot in the district playoffs.

Outlook: Jack Flanagan’s first year in charge of the PJP girls after 11 years on the boys side was a mixed bag. There was a 9-1 run in the PAC Frontier and division title but it was offset by injuries to leading players Tess Crossan and Amelia Kennedy that left them near .500 and without a spot in the district playoffs.

This year, PJP has no choice but to do without multi-year standouts Crossan and Kennedy after the duo graduated, leaving an opening for new players to step into leading roles. Junior Bella Tammaro (5.3 ppg) is the highest-scoring returner from last year. Flanagan hopes the winning tradition that PJP has largely upheld can continue in a year of transition.

“The players and coaches of this year’s team have discussed what it means to live up to ‘The Standard’ of the girls basketball program today, tomorrow, next week and next month, in season and offseason, from freshman year to graduation day and beyond,” Flanagan said.

Outlook: Pottsgrove endured a difficult season last winter and its large list of returners will be determined to have a better experience this year. Senior Aaliyah Freeman was the leading scorer at 11.9 ppg in 2021-22.

“Some early season injuries, illnesses and lack of numbers may hinder their progress a little at the beginning of the season, by the time the division games start they hope to be running more smoothly,” Pottsgrove coach Mike Brendlinger said.
The Falcons aren’t primed to quickly be back atop the Frontier, but putting together a handful of winning performances should be within reach.

“We will look to improve each day. We have our core returning, but they need to understand and figure out their new roles,” Pottstown coach Madison Morton said. “Our team goals never change: win or lose, we strive to get better each game.”

Outlook: So much for a rebuilding year. That was the takeaway from the Rams’ run a year ago when it didn’t miss a beat by ripping off runs to a fifth straight PAC title, the District 1 final and final eight in the state despite the graduation of an elite class led by Pa. Player of the Year Lucy Olsen (starting point guard at Villanova).

With all five starters returning, including 2021-22 Mercury All-Area first team selections Anna Azzara (14.1 ppg) and Mac Pettinelli (7.7 ppg), With a blend of everything that equals wins – defense, ball-handling, inside-outside scoring – Spring-Ford is posed to do a lot of it. One of its elite quality is its 3-point shooting, led by Katie Tiffan and Siena Miller, though that area will miss junior Aaliyah Solliday, who will miss the year after tearing her ACL this preseason.

Senior center Meg Robbins, an Elizabethtown commit, should be a big influencer inside to compliment the outside shooting and Azzara’s all-around ability. Spring-Ford won’t be catching anyone off-guard this winter, but that likely won’t matter. Only Perkiomen Valley can stand in the way of a sixth straight PAC title and another run into March looks on the cards for the Rams.

“We are still looking to rebuild a destroyed program. With the addition of two new ninth graders and a 10th grader to the team we will look to improve upon last year,” McCarthy said. “This year we have a brand new building and brand new gym, hoping that this stirs some excitement and energy for the season.”

Outlook: Upper Perkiomen caught lightning last year after a long run of hardship in the PAC (two league wins between 2015-21) when it went 8-2 in the Frontier, qualified for the PAC playoffs for the first time since 2012-13 and the District 1 playoffs. Offseason departures of key players Grace Galbavy (transfer to Perkiomen Valley) and Hannah Keeney (graduation) will be felt severely.

The Indians, now under former assistant Shelli Petsch, will look to center Erin States (PAC Frontier first team last winter) to lead the way. Matching the results of last year won’t be in the cards for Upper Perk but it can hope to gain from last year’s success to avoid a return to the league cellar.

Outlook: New coach Matt Bowe takes on his next project after shifting from the head coaching position at Upper Perkiomen to Daniel Boone. Upper Perk was 15-7 a year ago; meanwhile Boone suffered through an 0-20 campaign. But with a very young core led by sophomores Julianna Hall and Erin Okuniewski, the Blazers are poised for brighter times. Boone already snapped a 48-game losing streak with a 48-19 victory over Antietam on opening night. It’s not going to immediately challenge in Berks II, but a season setting a new foundation will do Boone well.

Outlook: There were some growing pains in Deanna Mayza’s first season in charge guiding the program where she had her own record-setting career. But Hill grew as the season went on and finished as champion of the PAISAA Commonwealth Cup, which fielded independent teams that did not make the main PAISAA bracket.

Looking to build on that progress, Hill returns three starters in seniors Annabella Schafer, Courtney Bodolus and Karly Cabot. Five games into the year, Schafer and Bodolus are averaging better than 12 ppg in a 2-3 start.

“Along with the three returning starters, we are excited about our younger group of sophomores, Ludwig, Krafczek and Eilberg,” Mayza said. “Our freshman starting point guard, Samantha Faella, is off to a great start in her very young high school career.”

Earning a spot in the PAISAA tournament would mark a successful campaign for Hill.

A repeat Penn Jersey league championship appears well within reach while Perk will be pushing to make and advance in the PAISAA Championships this winter.