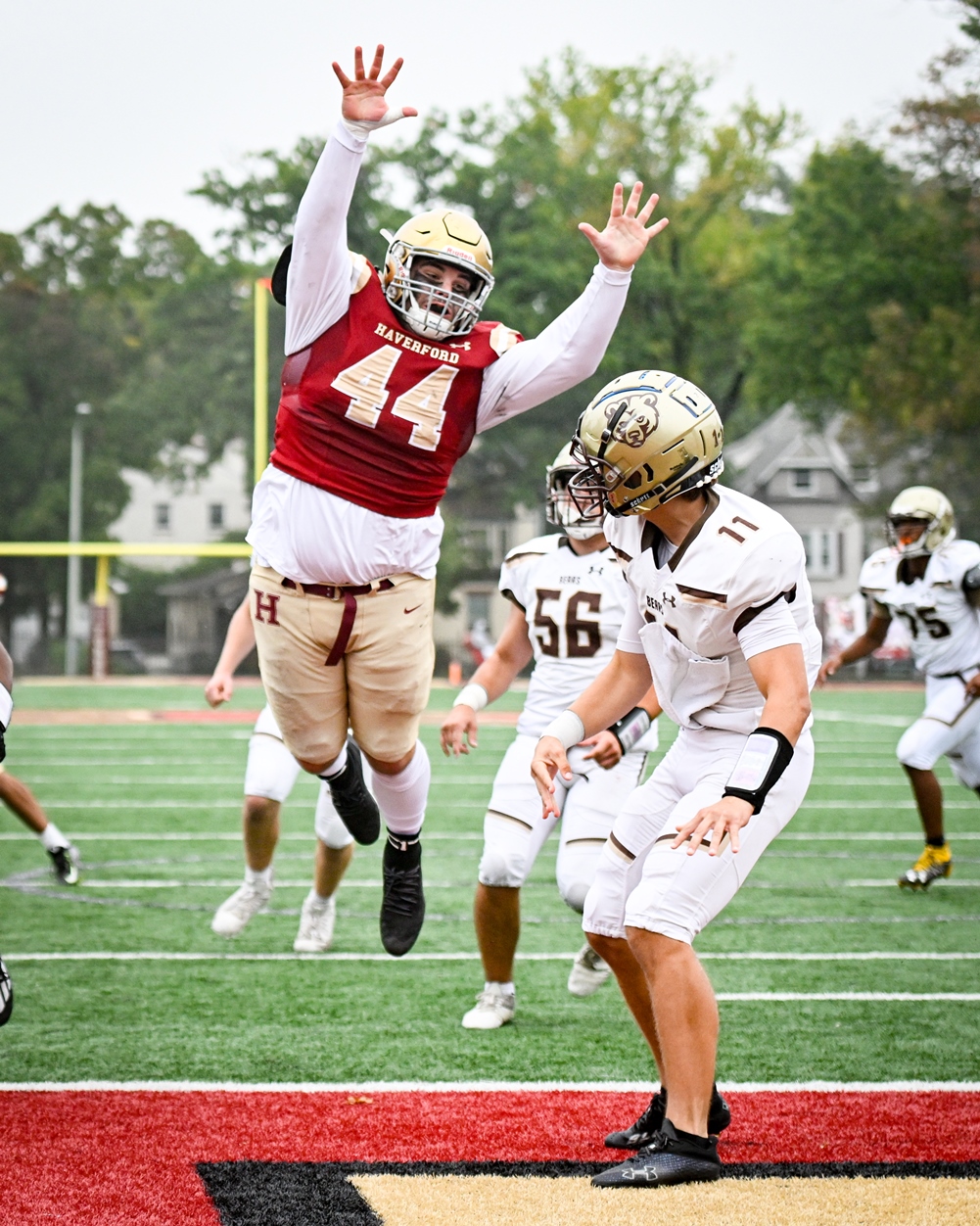 Haverford School senior defensive lineman Bill Brosko, the co-MVP of the InterAc football league this fall, left a big impression not only on the league champion Fords but on many local high school gridiron fans.

“Billy is one for the ages – he was the most disruptive player in the area and was in the backfield quicker than you could blink,” said Haverford School football head coach Brian Martin. “I had parents whose sons didn’t even play for Haverford School come up to me and say, ‘That No. 44 is a highlight film, that kid’s a monster player.’ Billy was a force on defense.”

This past fall, the Fords went undefeated for the first time since 2015, posting a 10-0 record. Haverford only allowed 101 points this season, and the 5-foot-10, 280-pound Brosko led the way with 72 tackles.

But it wasn’t only Brosko’s forceful line play that made a difference for the Fords, it also was his leadership – on and off the playing field.

“During games, having Billy was like having another coach on the team,” said Martin. “Billy would pick up little things that the other team’s offense was doing.

“The way Billy approached his role as a team leader was special. Billy would make sure that the team was focused and had the energy to practice. He would do that with music at practice or bring the team in to remind them of our goals.”

According to Martin, Brosko was the team’s unofficial DJ at practices.

“Billy would bring out the speaker, get out the playlist and tell all of his teammates, from seniors to freshmen, to ‘give me some songs to play at practice,’” said Martin. “He was a vocal guy at practice, and a leader by example. He would make sure the locker room was clean and everyone had a ride. He wanted everyone to be at their best and he gave it his all.

“He was the last one out of the locker room, he’d help clean it up and put away stuff. Same with the weight room. After a win, we’d all be celebrating in the locker room, and he’d be picking up cups and other stuff.”

While the Fords culminated their season with a victory against previously undefeated Episcopal Academy, Brosko’s favorite memory of the 2022 football season was the 35-11 win against Archbishop Wood in September.

“It probably was my favorite [memory] because of how our team clicked together and played as a unit,” said Brosko.

Asked how he viewed his role as a leader on the defensive line, Brosko responded, “The leadership role up front was huge and I learned it from our past seniors from the Class of 2019.”

Brosko transferred to Haverford School prior to his freshman year, and as a sophomore and junior he received second team All-Main Line football honors as a defensive lineman.

This season, Brosko’s younger brother Matt was a fine running back for the Fords, picking up 1,480 yards rushing in 258 carries, scoring 14 touchdowns and receiving first team All-InterAc honors. According to Martin, Bill Brosko serves as a kind of mentor for his younger brother.

My dad always talked about him and I watched his old highlights and I thought he was the greatest,” said Brosko.

While Brosko continues to work on his football speed and strength, he also is a standout wrestler for the Fords. Last season, he lost only two matches, and finished second in the 285-pound class at the 86th Annual National Prep Wrestling Championships last February. His only two losses last winter were to Malvern Prep’s Nicholas Feldman, who won the 285-pound National Prep title and is now wrestling for Ohio State University.

“Billy is an all-around great guy who will be missed on and off the (football) field,” said Martin. “He will be tough to replace as leader but the younger players saw what it takes to lead a team and I hope they learned from Billy.”

(To be selected as Main Line Boys Athlete of the Week, a student-athlete must first be nominated by his or her coach.)